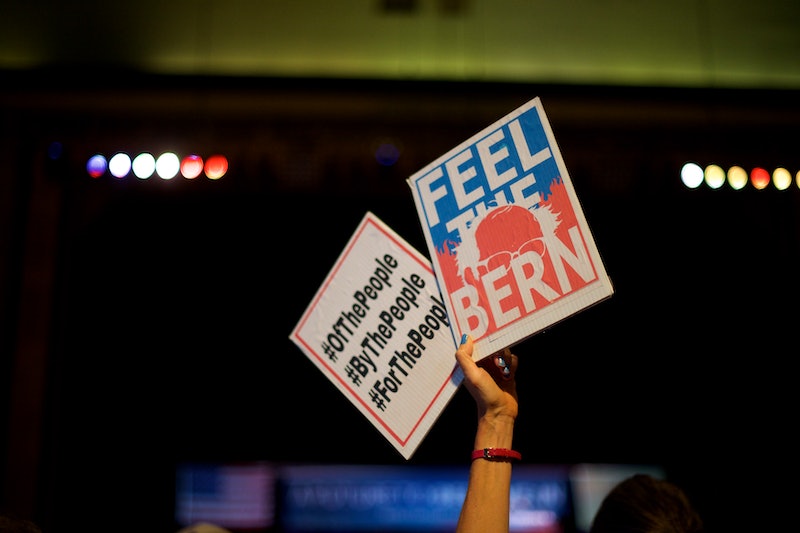 In a live-streamed video address to his presidential campaign supporters on Thursday, Sen. Bernie Sanders made no move to concede the primary race to presumptive Democratic nominee Hillary Clinton but had little to say about the possibility of defeating her at the party's July convention. Instead, Sanders turned the attention away from himself as a presidential candidate to tout the never-ending nature of political revolutions. Speaking directly to his support base from his hometown of Burlington, Vermont, Sanders called on his supporters to run for office at local and state levels in an empowering message of change.

Although the end of the Democratic presidential primary has made Sanders' White House dreams a long shot, the senator urged his supporters to continue their efforts to transform America's political and social systems.

"Real change never takes place from the top down, or in the living rooms of wealthy campaign contributors," Sanders told his supporters. "It always occurs from the bottom on up – when tens of millions of people say 'enough is enough' and become engaged in the fight for justice." This, Sanders said, is what his presidential campaign had hoped to inspire.

"We must continue our grassroots efforts to create the America that we know we can become," Sanders said, emphasizing the need to keep the revolution alive in an effort to push back against conservative legislators. "We need to start engaging at the local and state level in an unprecedented way," he continued. "Hundreds of thousands of volunteers helped us make political history during the last year... Now we need many of them to start running for school boards, city councils, county commissions, state legislatures, and governorships. State and local governments make enormously important decisions and we cannot allow right-wing Republicans to increasingly control them."

Sanders urged his supporters to consider running for local, statewide, and even Congressional positions as a means of continuing the change they sought to bring forth by voting for the Vermont senator in the Democratic presidential primary. "I hope very much that many of you listening tonight are prepared to engage at that level," Sanders said after calling for his supporters to increase their political involvement. "I have no doubt that with the energy and enthusiasm our campaign has shown that we can win significant numbers of local and state elections if people are prepared to become involved."

It was a call that immediately resonated with many of his supporters, many of whom are younger voters who've long felt disenfranchised. To help those mulling over a bigger role in politics navigate the bureaucracy of running for a public office Sanders offered his supporters use of a new website his campaign established at berniesanders.com/win. The website aims to help connect supporters with the various ways they can continue to drive Sanders' political revolution forward, be it through volunteer opportunities or running for office.

"We need a new generation of people actively involved in public service who are prepared to provide the quality of life the American people deserve," Sanders said.