On Thursday, at the conclusion of a months-long, bruising primary process, Vermont Senator Bernie Sanders delivered a 23-minute online address to his supporters. It ultimately wasn't what many observers had thought it might be, as Sanders did not drop out of the race, nor did he offer any indication he was planning to do so. Rather, he detailed some of the issues he wants to receive higher priority from the Democrats, pledged to work to defeat Donald Trump, and then this: Bernie Sanders said the "political revolution" needs one important thing from his supporters, and it's "new blood" engaging with the political process.

Make no mistake, he was talking about very active engagement. To be specific, he urged his campaign's followers to enter politics themselves. Maybe you've heard that old saying, "Be the change you want to see in the world"? It's frequently attributed to Mahatma Gandhi (although there's no concrete evidence he ever actually said it), but regardless, that's essentially the pitch Sanders is making in asking his supporters to jump into the fray. It's no surprise why ― it's become increasingly clear that Sanders' extended campaign endgame is geared entirely towards pulling the Democratic Party to the left, and there's probably no better way to do that than bringing some fresh blood into the system. 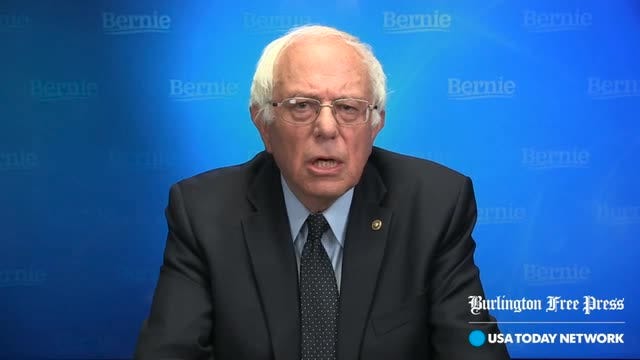 We need to start engaging at the local and state level in an unprecedented way. Hundreds of thousands of volunteers helped us make political history during this last year. These are people deeply concerned about the future of our country, and about their own communities. Now, we need many of them to start running for school boards, city councils, county commissions, state legislatures, and governorships. State and local governments make enormously important decisions and we cannot allow right-wing Republicans to increasingly control them.

I hope very much that many of you watching tonight are prepared to engage at that level. Please go to my website at berniesanders.com/win to learn more about how you can effectively run for office or get involved in politics at the local or state level. I have no doubt that with the energy, and enthusiasm, our campaign has shown that we can win significant numbers of local and state elections if people are prepared to become involved. I also hope that people will give serious thought to running for statewide offices and the United States Congress. We need new blood in the political process, and you are that new blood.

Sanders is absolutely right when he says the Democratic Party could use some "new blood" ― although he did a phenomenal job firing up younger voters, it's an inescapable reality from watching the primary process play out that the Republicans had more youth and longevity in their field, with candidates who could possibly be national players for a couple more decades. On the Democratic side, Sanders (74) and Clinton (68) are almost certainly in their last presidential rodeos (unless Clinton wins and face reelection, of course). Even former Maryland governor Martin O'Malley, who tried to sell himself partially as a candidate from a younger generation, is already 53 years old, just one year younger than President Obama is now.

But, as Sanders' meteoric ascent demonstrated, it's not all about age, but about policy. And that's really the most meaningful sense in which a progressive firebrand like him wants to see members of his coalition jump into the political process ― the hope that a groundswell of far-left or Democratic socialist adherents can fundamentally transform the party, moving it closer to, among other things, his hard-charging brand of economic justice. If this sounds like something you're interested in, he wasn't kidding about his website ― you can currently fill out a form to receive information about running for office in your area.