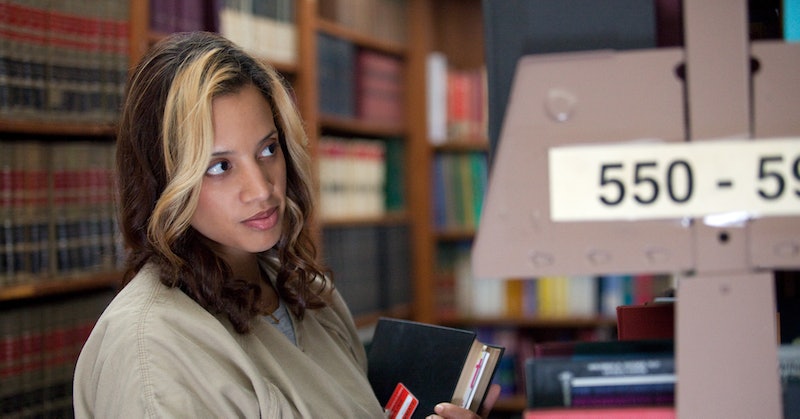 For a character that really wasn't in much of Season 4, Daya really ended the season with a bang on Orange is the New Black . Or did she? Spoilers ahead for all of Season 4. Did Daya shoot C.O. Humphrey on Orange is the New Black? The show left his fate up in the air when it cut to black before Daya made a choice. After the inmates were treated poorly all season by the C.O.s, the prisoners rioted in the last few minutes of the finale. And, somehow, Daya ended up with a gun and a very important decision to make.

For the backstory, one of the C.O.s accidentally killed Poussey when he didn't notice she couldn't breathe as he pinned her down during a scuffle. It may have been an accident, but he definitely is still responsible for her death. So, when Caputo announced that the C.O. would not be punished and would be returning to work, the prison was up in arms over the injustice. Caputo didn't even say Poussey's name during his press conference!

When the riot reached C.O. Humphrey, he went to draw his (illegal) weapon, but Maritza tackled him first, sending the gun flying into Daya's possession. She pointed it right at Humphrey as the entire camp united with him as their enemy, and they shouted at her to pull the trigger.

To be fair, Humphrey was literally horrible. Every season seems to up the ante with how terrible the guards are to the inmates (can we have Pornstache back now?) and Humphrey was particularly sadistic. He forced inmates to fight, took joy in causing them pain, and there was a whole thing with a mouse that I cannot think about without feeling queasy.

So, will Daya take care of business? Look, I hate Humphrey as much as the next person, but unfortunately a death for a death is rarely a good solution. I don't see Daya as a murderous type, but, then again, she's been abandoned by her fiancé, hasn't seen her child, and her mother just got out of prison before her. She's been very alone this season, and perhaps is harboring some anger about that. Plus, perhaps she's thinking that she can take revenge on her C.O. ex by shooting another C.O.? In my own personal opinion, Humphrey does deserve to die for the mouse thing alone, but I also want Daya to rise above this situation. She has a baby to think about, and she can't afford any more time in jail.

Unfortunately we won't know which decision she made until Season 5, which likely won't be out for an entire year. Until then, all we can do is theorize.