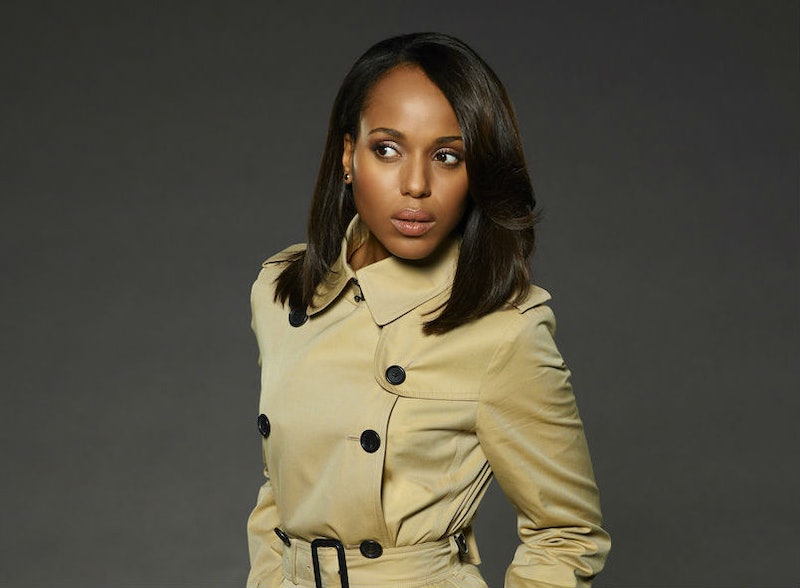 Chins up, gladiators, because Scandal returns for mid-season in just a few hours. Of course, seeing that it's been just shy of three months since we last saw our wonderful crew of Washingtonians, there's quite a bit to remember before the new episode airs at 10 PM ET/PT. And don't be so sure you're not hazy on some of the details, because there were oh-so many.

Of course, keep in mind that "A Door Marked Exit" opened with many problems to deal with: Mama Pope is a criminal, Sally murdered her husband, Huck went rogue and tortured Quinn while using the phrase "YOLO." The horror. But because ABC loves a good string of absolutely bonkers events — the better to create forced hashtags like "#mamapope?" with, my dear — and because every Shonda Rhimes show eventually reaches the point where insane twists are the weekly norm, all of these circumstances spun out of control. Then all we could do was sit in a puddle of our own confusion and wonder how we could possible handle waiting until Feb. 27 for a conclusion.

Well, Scandaloonies, it's almost time. Just make sure you're clear on these events before you turn on the telly.

Fitz interrogated Rowan last we saw Scandal and while Fitz said some rather disgusting things about Olivia (to her dad, buddy?), Rowan responded with the best possible papa bear growl imaginable: "You are a boy ... you just love that [Olivia is] a door marked exit." Dayum. Are you seeing this, Emmy people?

That being said, Jake and Huck still maintain that while he's done some good here, he's still a dangerous mofo.

2. On that note, Fitz is pretty disgusting

It was already too much when Fitz offered Olivia a house in the backwoods so they could build a house of lies together and she responded with all of the sex the show had been missing for what felt like eons, but then he tells Rowan "the things I could tell you about the way [Olivia] tastes." Olitz was all the rage in Season 2, but in Season 3, please get the President away from our Livvie.

Towards the end of the episode, Jake Ballard — who's been getting the shaft especially since Fitz went all domestic bliss on Olivia — tells Olivia goodbye by saying "I loved you ... I love you." He's got to tell her goodbye because he's just been brought in to replace Rowan as the head of B613. And while we know Rowan's still a scary guy, you have to feel a little terrible for Papa Pope and super terrible for the never-gonna-happen saga of Jake and Olivia. Poor Scott Foley. Always a Noel.

4. James & Cyrus Reunite, Under One Condition

After James tries to sell Cyrus out to David, waving the story about Cyrus pimping him out to the VP's husband and then covering up his murder, David doesn't bite, so James is forced to try something else. Cyrus gives him a heartfelt apology for being the devil and James agrees to stay with him if Cyrus makes him press secretary of the White House. If you can't beat the devil, join him, I suppose?

After Olivia learned all about Maya's sordid past — stealing documents from high-level officials and lying to Papa Pope about there being a bomb on the plane he commanded Fitz to blow up — Maya was on a plane halfway around the globe. But in the final moments of the mid-season finale, we find Maya calling Olivia from the streets of D.C. dressed in her daughter's signature look: a white coat and ivory gloves. Uh-oh, Olivia.

6. Quinn and Charlie Sittin' in a Tree

After Huck tortured her, planted a bug in her teeth (which she pulled out in a bloody display), and then excommunicated her from the Gladiator squad, Quinn returned to the loving (we think?) arms of Charlie the Hitman. This was pretty terrifying when they first got together, but this time, it seems — dare I say it — genuine.

She calls Cyrus to help her clean up the fact that she repeatedly stabbed her husband because, after all, Cyrus is the reason this all went down. They decide to trick the medical examiner into letting dead husbands lie, so she seems safe for now, but will she still try to become the leader of the free world with this skeleton in her closet? That part, we're not so sure about. She just might be that bold.

If Sally does decide to run, it's going to be a surefire shit show. In the final moments of the episode, an NSA agent named Shelby brings something to David's attention. Until this point, he's wanted to stay away from scandal and risky pursuits since it ruined his career the last time around, but when Shelby brings him a tape of Sally asking Cyrus to help her with this murder, he's back in the game.

9. We Have No Idea What Harrison's Deal Is

We saw a few little dribbles of Harrison's sordid past at the beginning of the season, but now they're gone. What is his big secret? Are you going to tell us Scandal? Don't leave us this way. You're better than that.

More like this
Does 'Locke & Key’s Ending Mean There Could Be A Season 4?
By Sophia Moore
'The Capture' Is Finally Back – & S2 Looks Tense AF
By Sophie McEvoy and El Hunt
Dr. Anna Pou Is Still Practicing Medicine After Facing Murder Charges
By Brad Witter
'Children of the Underground' Subject Faye Yager Now Runs A North Carolina B&B
By Brad Witter
Get Even More From Bustle — Sign Up For The Newsletter