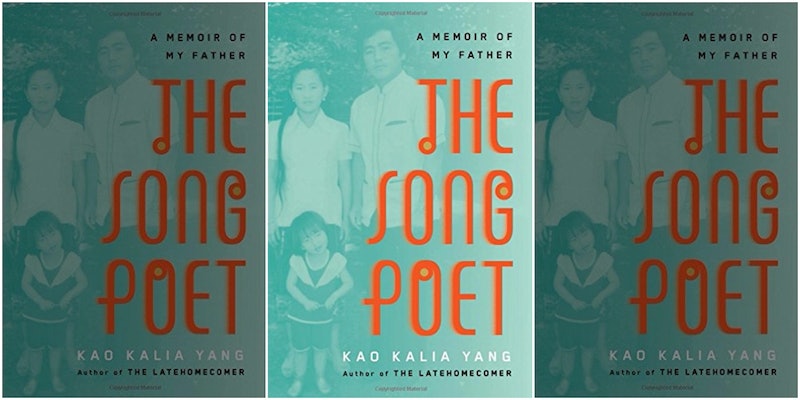 Kao Kalia Yang is the author of The Song Poet: A Memoir Of My Father , published by Metropolitan Books.

Thai men and women, smugglers, tried to buy us refugee children, sometimes with money and other times with bottles of fish sauce. To the world around me, I was one more of thousands, little girls with bangs cut straight across their brows, skinny arms and legs, living to die. I was perhaps, they thought, dispensable. My life in the crowded refugee camp could not have looked like much to outsiders. Few knew that in my father’s hold, on the currents of his songs, my world was rich with story, my future the happy ending we were walking toward.

I was one, two, three, four, five, and six years old. I sat on my father’s straight shoulders. His hands held my legs steady as we made our way over the uneven ground. From my perch, I took note of the changing years by the color of the flip-flops on his dust-covered feet.

The Thai men with guns stood their ground around the 400 acres I knew as my home, Ban Vinai Refugee Camp, a place I shared with 40,000 other Hmong people. Even as a child, I knew not to wander far. My playground was the stretch of my mother’s sarong. It was only on my father’s shoulders that I could venture into what I believed was the world.

Even as a child, I knew not to wander far. My playground was the stretch of my mother’s sarong. It was only on my father’s shoulders that I could venture into what I believed was the world.

Beneath the canopies of the tall trees in the compound where we lived, my father walked with me as the sun’s rays, filtered by leaves, danced on my arms in droplets of light. Scrawny chicken with bald spots on their bodies pecked at the hard pebbles on the ground. Hungry dogs loitered by the base of the tall trees, licked at the places where little children had peed and pooped in the night. My father said that the new puppies could not open their eyes because the world was so bright.

My father told me I was not a child of poverty although Thailand was practicing a humane deterrence policy and us Hmong refugees only got food three days a week, mostly broken rice and dried, salty sardines. He said I was not a child of despair despite the fact that all around me there were cries for the dead and suicide was the number one cause of death in the crowded camp. He told me I was not a child of war. I understood only that my people had fled from Laos and that we were waiting in Thailand for the future to begin somewhere far, far away on the other side of the world.

When I grew tired of the circles his feet made on the earth, my father climbed the tall trees in the compound with me in his arms. Above the leaves, my father held me tight and told me that the size of my hands and feet would not dictate my life journey. He pointed to the distance, beyond the camp gates. He said, “One day you will walk on the horizons your father has never seen.” My father is a song poet in the Hmong tradition, his words are his gifts to our world.

I believed in my father’s words. My family came to America as refugees of the Secret War in Laos on July 27, 1987. I was six years old. With my father’s words and his stories fueling me, my mother’s gentle hands guiding me, I graduated from the St. Paul public school system. I went on to complete a bachelor’s degree at Carleton College and then a masters of fine arts at Columbia University. I published a book about my grandmother and my family’s journey and then I published a second book, a memoir of my father’s life. The man whose songs had kept the drums of the dead at bay, whose words had opened up the far horizons for me to see, the man who spent most of his life in America talking to machines in the big, windowless factories of Minnesota. I wanted the world to know that men like my father are more than merely uneducated newcomers looking for jobs to feed hungry children. My father’s words created a more beautiful world for my siblings and me—even though his voice lost its power in English, a language where breath is not enough to carry meaning. Because of my father, I believe in those possibilities still.

Father, I remember being eight years old. You and I, a good friend of yours and his daughter were at a soccer tournament. We were in a field of green grass. The day was nearly done. The sun was setting, cotton candy clouds floated low across the wide sky. A cool wind was blowing. It was the last soccer match of the tournament. The food vendors were cleaning up. Your friend’s daughter asked her father for money to buy food. I did the same. I can still hear you asking me if I was truly hungry. I said, “Yes.” When you opened your wallet, close to your side and I peeked, there was a single dollar bill inside. You gave it to me.

Father, I remember being 18 years old. You and my mother and the children were dropping me off at Carleton College so I could become educated. You handed me a box as the children clambered into the car. I tried not to cry as you drove away. In the dorm room, on the desk, I opened the box to find a twelve-hundred-dollar Toshiba laptop, I knew you only had $1,300 in your account. You and my mother had spent all that you had so I could become educated in America.

Father, all my life, you gave me the things I’ve needed. I wanted to give you something in return.

Father, all my life, you gave me the things I’ve needed. I wanted to give you something in return. Father’s Day is upon us. While I can’t carry you high on my shoulders, I can tell the world that my father, Bee Yang, was not a child of poverty, war, or despair; that, he, too, was a child of hope and a man of poetry, that he and men like him make possible the captains of a more beautiful future. Father, in my writing I hope you find a place where you belong, not as a shadow of history, or as a poor man who can barely write his own name, but as the singer of a life story with lessons worth learning from.

More like this
Candice Brathwaite Is Over Using Her Own Life For Material
By Shahed Ezaydi
Josh Peck Shows Love To Jennette McCurdy After Her Shocking 'iCarly' Revelations
By Radhika Menon
Emma Mackey *Is* Emily Brontë In The First Trailer Of The Biopic
By L'Oréal Blackett and Sam Ramsden
We’ve All Had Bad Sex. Nona Willis Aronowitz Is Talking About It.
By Sophia Benoit
Get Even More From Bustle — Sign Up For The Newsletter