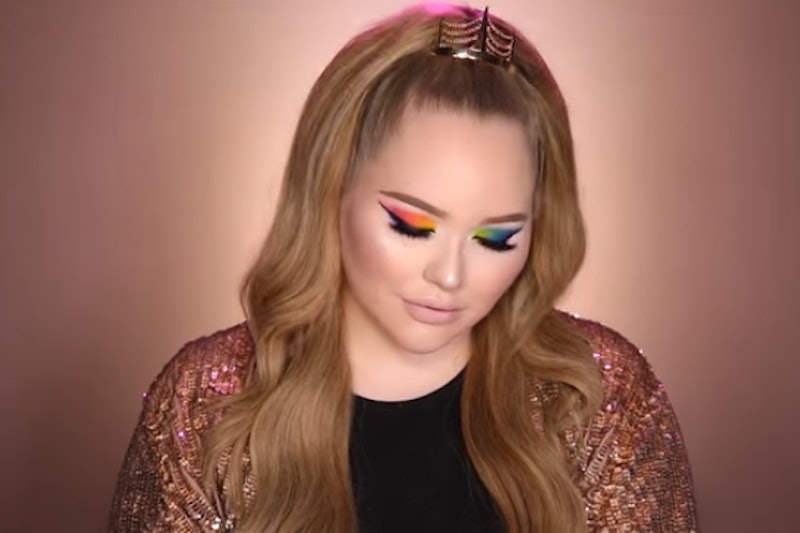 When it comes to YouTube beauty vlogger NikkieTutorials, she's not one to shy away from using her channel to spread a positive message. Recently, she used her platform to honor the LGBTQIA+ community with a NikkieTutorials Pride Month makeup video, repping the message that it's OK to love and celebrate who you are, while shouting-out our unique differences. In the past, Nikkie has also spoken out against makeup shaming through #ThePowerOfMakeup campaign, so this video is just another notch in her history of bolstering self confidence and growing a loving and accepting community.

As reported by Popsugar, "In her video, Nikkie shared that the LGBTQ community has long been a great supporter of her YouTube career. She chose to show her gratitude by dedicating the multicolored makeup tutorial to them while encouraging her viewers to be proud of who they are." In the wake of the devastating Orlando mass shooting at gay nightclub PULSE, the message couldn't have come at a better time.

In the beginning of her tutorial, Nikkie says, "In this video I want you to know that it's OK to be yourself, it's OK to love yourself. And for no f*cking reason should you hide who you truly are." I believe this moment calls for a solidarity fist bump.

She then continued to encourage those watching to bust out every brightly-hued eyeshadow they have in their makeup arsenal, and to use their brushes to show their support and love for one another. With emotion, Nikkie explained what the point of her tribute was: "To share the light on Pride Month. To share the light on positivity, colors, and not letting hate win."

In addition to that, she added an action item to her video in case viewers want to show their solidarity in a different way. Popsugar reported, "She also provided a donation link so that her supporters can make contributions in honor of the Orlando victims."

While she encouraged subscribers to donate, Nikkie herself will also make her own contributions, as she explained in a post on her blog. She wrote, "I’m creating this video as tribute and to show my respect to the beautiful souls we have lost in Orlando. ALL AD REVENUE THIS VIDEO MAKES WILL BE DONATED TO SUPPORT THE VICTIMS OF THE PULSE SHOOTING!"

So whether you plan to wear the rainbow flag on your eyelids like Nikkie, use the link to donate, or just sit through an ad before you learn new eyeshadow palette techniques, you're bound to be making a difference. As Nikkie herself would say, that's the power of makeup.