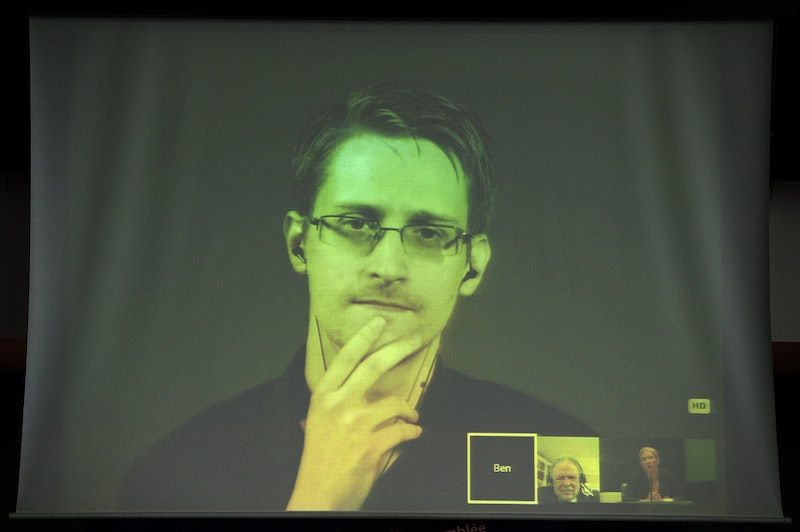 In 2013, Edward Snowden quickly became a household name. You know the story: The former government contractor released several thousand documents that blew the whistle on the National Security Administration (NSA)'s surveillance activities, which Snowden strongly opposed. Since then, he's been charged with various crimes, including theft of government property and communicating classified information, all while he's been hiding out in Russia to avoid a trial. Snowden now has some new projects in the works, and he still has a lot to say about the U.S.

In a 2015 address to Queen's University in Canada, Snowden said, "I don't live in Russia, I live on the internet." From the internet, Snowden has found ways to stay ever-relevant in the U.S., despite his peculiar situation with the federal government. Most regularly, that's through his Twitter account, which he launched in 2014 and currently has more than 2 million followers.

He also makes speaking appearances, like the one at Queen's University. For these, he is almost always shown on a large projection screen via a livestream. (Reminder: He can't set foot in any country that might immediately extradite him to the U.S.) In May, Snowden spoke to the University of Chicago's Institute of Politics about his career, his document dump, and his knowledge of U.S. surveillance programs. While speaking, he reiterated his adage about the internet:

When he's not making speaking appearances, Snowden seems to have plenty of other work to fill his days in Russia. In 2014, he joined the board of directors for the Freedom of the Press Foundation, a nonprofit that supports journalists who expose government corruption. Although his release of classified information remains controversial, Snowden's role with the foundation makes sense. In his whistleblowing, Snowden relied on journalists, particularly Glenn Greenwald, then of The Guardian, to write and publish what he knew about the U.S. government.

More recently, Snowden has found himself involved in the film industry. According to Polygon, Snowden created a short segment for a film by Joseph Gordon-Levitt. The film will explore the impact of technology on democracy — another fitting project for the whistleblower. Gordon-Levitt recently finished portraying Snowden in the big-screen version of his life, which is aptly called Snowden and set to come out later in 2016.

Snowden also seems to be paying close attention to the election that's going on in the U.S. between Donald Trump and Hillary Clinton. (After all, he can still, technically, vote in the election.) He doesn't seem to be a fan of either Trump or Clinton, and he wants his Twitter followers to see the same red flags that he does.

Three years after Snowden's historic document dump, he's still very much a wanted man by the U.S. government's standards. He's also still very much a relevant figure by the internet's standards. That relevance could even grow later this year when his story is released in film and we learn more about his feelings on the election.

More like this
'Scream’s Courteney Cox Has Broken A Major Horror Record
By Sophie McEvoy
What Is Ryan Gosling's Net Worth? His Paycheck Per Film Reaches 8 Figures Now
By Meg Walters
Before 'Bullet Train,' Revisit These Brad Pitt 'Fight Club' Premiere Photos From 1999
By Grace Wehniainen
What Is Brad Pitt’s Net Worth? The Bullet Train Star Now Makes 8 Figures Per Film
By Hugh McIntyre
Get Even More From Bustle — Sign Up For The Newsletter