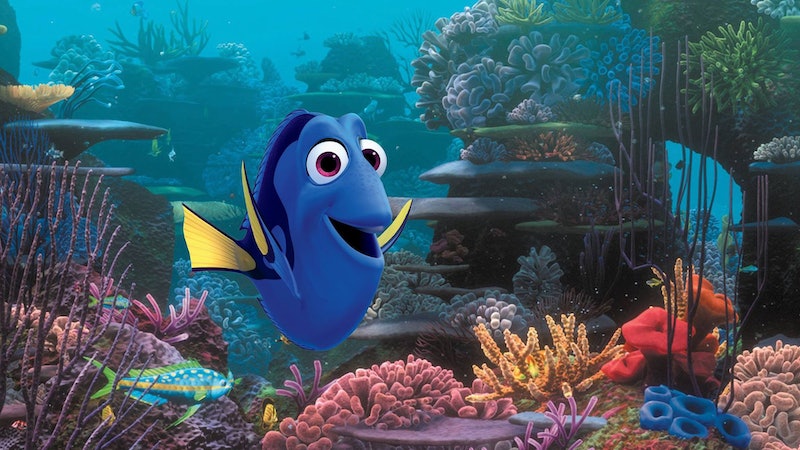 Back in 2003, when Finding Nemo came out, thousands of people completely missed the memo on what the message of the film was. Despite the fact that it very clearly illustrated that fish don't want to live in tanks and don't like being stolen from the ocean, "Clown fish sales skyrocketed," after the movie's release, according to The Huffington Post Australia. The site interviewed University of Queensland school of biological sciences PhD candidate Carmen da Silva who also said, "There's nothing wrong with owning a marine fish in an aquarium but I think a lot of people didn't realize 90 percent of clown fish sold are taken from the wild." So, with that in mind, it's time for another lesson pegged to Finding Dory: Don't buy a blue tang fish. Don't do it. No matter how cute Dory is and how much you love her, she will never make a good pet for some pretty serious reasons.

According to National Geographic, "A full 98 percent" of saltwater fish must be captured in the wild because they can't yet be bred in captivity. And, the horrific way many of these ocean animals are being harvested should make you think twice about scooping up a Nemo or Dory at your local pet store. According to National Geographic, some ocean fisherman squirt sodium cyanide on the coral reef to stun the fish and make them easier to scoop up. The magazine reported that the chemical is toxic and has a lasting effect on the reef and other marine life, not to mention on the millions of fish that are exported every year. A 2008 report from the National Oceanic and Atmospheric Administration found that "up to 90 percent of the 11 million tropical fish that enter the U.S. each year" are harvested using sodium cyanide.

According to a 2011 study published in Recent Research in Science and Technology, which tested the effects of sodium cyanide on freshwater carp, those who had the chemical in their system "showed erratic swimming" and "imbalance in posture," as well as a "gradual loss in equilibrium." The study goes on to report that exposed fish "struggled hard for breathing, often moved to the surface to engulf atmospheric air and tried to escape the toxic aquatic medium." Over time, for the exposed fish, "the combination of cytotoxic hypoxia with lactate acidosis depresses the central nervous system resulting in respiratory arrest and death."

A different National Geographic article reported that as of May 2016, blue tang have not yet been bred in the captivity. That means that every single blue tang in a pet store or in a home aquarium was stolen from the ocean. That's right, buying a Dory fish means you're contributing to a family of blue tang needing to pull a Finding Nemo/Dory IRL, except they actually can't, because Marlin's cross-ocean journey is the stuff of fiction. Instead the blue tang will just never see their family member again.

Additionally, blue tang are not always small. According to The Nature Conservancy, "adults average 12 inches in length" and can sometimes live in packs of 10-12 fish. Do you have the capacity to house 12 one foot-long blue tang fish? No, you probably don't, which means your blue tang would have a diminished life compared to what it could have in the sea. If you keep a blue tang in an aquarium, they're going to quickly outgrow their tank and become even more cramped for space. We've seen in two films now the effects living in a glass cage can have on fish, and, while the movies aren't real, the effect of captivity on sea creatures is, according to the The Animal Welfare Institute. "Many wild-caught animals spend days or weeks in transit before arriving at your local pet store; mortality rates from stress, injury, disease, or mistreatment can exceed 80 percent," the Institute reported.

Disney issued educational information ahead of Finding Dory's release, with the hope of instructing people on what not to do. The packets included information on the best type of fish to house in an aquarium, and how to protect and conserve ocean fish. You can also use the Humane Society approved app called Tank Watch, which details the saltwater fish that are safe for tanks and which ones are not.

I understand why Dory's fun, unique attitude in the films can make it tempting to want to bring one home. But, in essence, robbing the ocean so you can have an on-theme pet is irresponsible, and frankly dangerous for both the fish in question and oceanic stability. Overfishing is a huge problem, particularly cyanide fishing, and taking a great amount of any one species out at a time can devastate the natural balance of things.

So, if you're craving a Dory fix this summer, see the film, but leave the blue tang fish where they belong — in the ocean.

More like this
A Guide To All Of Zach Shallcross' 'Bachelor' Filming Locations
By Brad Witter
Helena Bonham Carter Doesn't Think 'The Crown' “Should Carry On"
By Sam Ramsden
Picky Eater? Sensitive Stomach? This Vet Nutritionist-Designed Dog Food Has A Plan For That
By Maria Cassano
Here’s Why Danny Masterson’s Hyde Isn’t In 'That '90s Show'
By Brad Witter
Get Even More From Bustle — Sign Up For The Newsletter
From hair trends to relationship advice, our daily newsletter has everything you need to sound like a person who’s on TikTok, even if you aren’t.