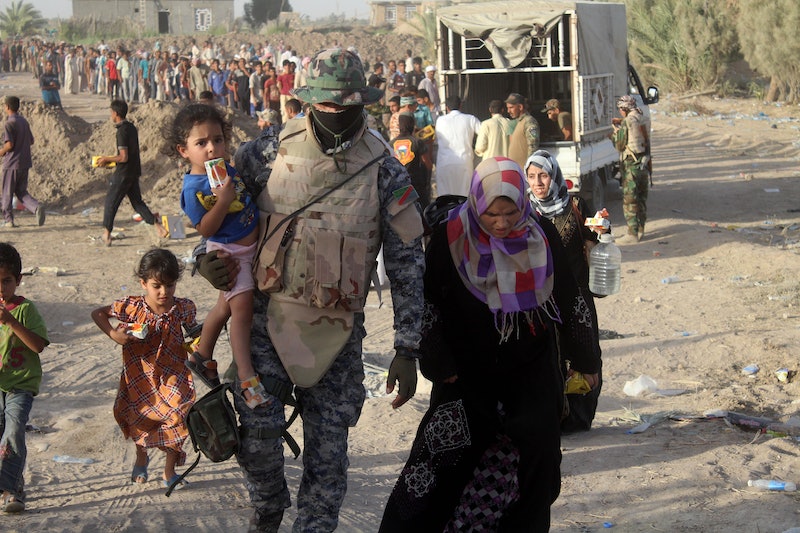 The ongoing conflict in Syria has quickly become one of the worst humanitarian crisis with more than 11 million people either killed or displaced by violence. Since fighting began in 2011, there are now more than 4.8 million registered Syrian refugees, according to the United Nations High Commissioner for Refugees. But for many Syrian refugees, fleeing the country does not guarantee safety or security. Many face uncertain futures and new hardships while attempting to rebuild their lives in neighboring countries. To mark the courage and strength of refugees around the world, the United Nations established June 20 as World Refugee Day in 2011. The day acts not only as a celebration of refugees' fortitude but as an annual reminder of refugees' plight, be they from Asia, Africa, Europe, the Middle East, or Latin America.

In Jordan, just across the border from Syria, lies Zaatari, the world's largest Syrian refugee camp. An estimated 80,000 people are housed in the camp, with many having lived there since it first opened in 2012. What was meant to be temporary, a safe haven in which to wait out the conflict raging back home, becomes an increasingly more permanent home for many with each passing year. In an attempt to provide for their families' basic needs, build new lives and bring some sense of routine and normalcy back into their lives, many refugees in Zaatari have established their own businesses, creating a micro-economy within the camp, according to a recent report from PBS Newshour's Amy Guttman. But elsewhere, many Syrian refugees find their lives are not so easily rebuilt.

Reports of exploitation, gender-based violence, sexual assault and harassment, and early marriages are stark reminders of how vulnerable refugee populations can be. In Turkey, a country that currently houses 2.7 million Syrian refugees, a refugee camp employee was sentenced to 108 years in prison earlier this month on charges of sexually assaulting eight young refugee boys. A 2014 report from Save the Children found one in every four marriages between Syrian refugees living in Jordan involves a bride under the age of 18.

On the eve of World Refugee Day, reports surfaced Turkish borders guards had shot and killed at least 11 Syrians, including two women and four children, attempting to cross into the country Sunday. The news highlighted the grim reality many Syrian refugees continue to face five years into the Syrian civil war. Turkey's military denied firing shots "directly on people" and claimed warning shots were fired, but the Syrian Observatory for Human Rights, a monitoring group based in Britain, said it believed Turkish border guards had shot and killed nearly 60 Syrian civilians attempting to flee ongoing conflict in their country by crossing the border since the beginning of the year. Human Rights Watch levied similar accusations in May, claiming Turkish border guards had killed five Syrians and injured 14 others attempting to smuggle themselves across the border in March and April.

Turkey has recently found itself at the center of criticisms related to the international community's handling of the Syrian refugee crisis. The medical aid charity Medecins Sans Frontieres (Doctors Without Borders) recently rejected more than 50 million euros in funding from the European Union in protest of a deal the 28-member bloc struck with Turkey in 2015 to curb the migration of Syrian refugees to Europe. The medical aid charity criticized the deal as "jeopardizing the very concept of the refugee."

Although geographically farther from Syria than many of the countries currently hosting large swaths of Syrian refugees, the U.S. has continued to attempt to play an active role in addressing Syria's humanitarian crisis. The Department of State claims the U.S. is the single-largest donor of humanitarian aid to Syrian refugees with more than $5.1 billion dollars in humanitarian assistance having been given since March 2011.

But for a nation many would argue was built by immigrants, the U.S. has been slow to open its doors to Syrian refugees. Of the more than 40,000 refugees admitted to the United States since October of 2015, only 7 percent are from Syria, despite President Barack Obama's pledge to take in 10,000. (The majority come from Burma, the Democratic Republic of the Congo, and Somalia, according to Pew Research Center.)

Recent events like the Charlie Hebdo attack in Paris and the Orlando shooting have caused mixed feelings toward Syrian refugees in the United States. In Texas, a federal judge dismissed a lawsuit from the state that sought to sue the State Department and block Syrian refugees from being able to resettle within the state. It is a small victory for advocates of Syrian refugees, as presumptive Republican nominee Donald Trump continues to propose anti-Muslim policies like immigration bans, mosque surveillance, and profiling as a means of responding to the threat of terrorism.