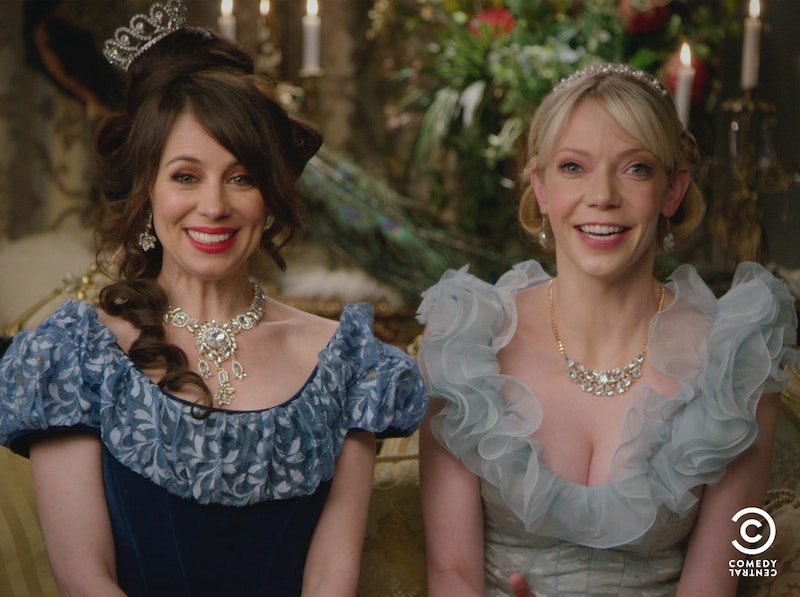 If we played a quick word-association game about the turn of the century, the phrase "bad bitches" may not be the first one to come to mind. But when you watch Lillian and Beatrice Bellacourt on Another Period, it's clear that they wrote the manual on how to be a bad bitch. Maybe they don't act according to the proper social mores of the time, but they sure know how to act like appropriate broads who DGAF.

Throughout the first season of Another Period, Lillian and Beatrice taught us a series of valuable lessons. First of all, you’ve gotta act like a boss to be a boss. Specifically, this means bossing around everyone in your immediate vicinity. Secondly, the value of a good cry is never to be underestimated. The key element is having other people around to witness that cry, so that you can use their pity to get what you want. And last of all, you should always celebrate your successes. Even if it's success that you had the perverse fortune of being born into (and didn't actually do anything to acquire), humility is overrated.

I've decided to continue learning outside the classroom and examine a series of laws that Lillian, Beatrice, and the rest of their aristocratic brood live by. So pour yourself a big ole' glass of fine champagne (then pour it out because you're rich) and start taking notes. Catch new episodes of Another Period , Wednesdays at 10/9c on Comedy Central, or any time on the CC App.

Today's pop stars generally roll with a posse of hyper-attractive/talented contemporaries, aka a "squad." But these supergroups have nothing on the Bellacourts and their house staff. After all, it's the paid friends who will stand by you through everything. Even if you've literally kidnapped their loved ones and held them in captivity, they'll still stick with you. The downstairs crew rolls deep.

If you specifically request a gold-dipped pony for YOUR birthday and receive some janky, gold-painted horse instead, you have every right to flip a table or three. Some may call it "being difficult" while the Bellacourts call it BEING REAL.

3. They Get People To Do Their Dirty Work

Haven't you heard? Having mountains of money exempts you from the normal concerns of human-hood. This includes running your house, hiring your servants, and even caring about who you hire. That's why the Bellacourts have Peepers, the reliable head of house whom, as we see in the above clip, does all the caring for them.

4. They're Open to New Sensual Experiences

5. They're Never Ashamed To Mark Their Territory

This is meant to be taken as literally as possible. Even if you're high on Morphine, like Dodo when she mistook Celery Savoy for a latrine and "made water" on her, the message is clear. This is my house, and I do what I want.

6. They Know The Value Of A Good (Phony) Cry

When you convince your husband to fake his own death, it's best to prep your best crying for his fake funeral. It's what your husband would want— even if he's actually still alive.

7. They Unabashedly Celebrate Their Successes

When you finally achieve some boss-worthy Bellacourt success, you should inform your adoring public in an understated way befitting your high social propriety. Just kidding! You should ham it up in the most grandiose way possible. I find that a fully choreographed song and dance routine like Lillian's, accompanied by various men lifting your prosperous figure, feels just right.

Catch new episodes of Another Period, Wednesdays at 10/9c on Comedy Central , or any time on the CC App .