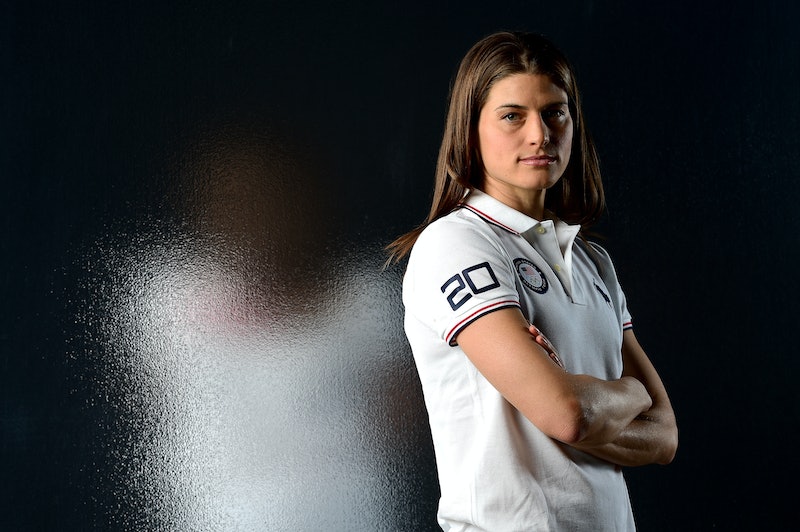 World champion triathlete and Olympian Sarah True is approaching her second Summer Olympics — and this time around, she's resolute in her desire to bring home a medal from Rio. Since 2005, True has has dedicated her career to triathlon, but being recognized as a self-motivated professional female athlete in American society comes with its own challenges. Though many of them have been conquered as female soccer players speak out against gender pay gaps, for example, the tendency to focus on everything but athleticism in media coverage of women's sports still exists.

After two years of training as a member of the International Triathlon Union, True experienced her first notable victory at the 2007 Aquathlon World Championships. In fact, she goes down in history as the first U.S. athlete to place on the podium at an ITU race. In both 2011 and 2012, she was named the USA Triathlon Athlete of the Year. Since then, she's travelled around the world to compete, placing in three total ICU Triathlon World Championships. In an interview with Bustle, enthusiastically lists off some of her favorite locales like Hamburg, Germany, and mountain villages in Switzerland. However, Hanover, New Hampshire, she ensures, will always be her home... at least during the summer, when the weather isn't completely brutal.

"I definitely gravitate more towards the small towns," she admits. "I'm a small town girl."

At the 2012 Olympics in London, True took fourth place, and her game has grown stronger. The secret ingredient, she explains, is confidence. After having the opportunity to travel the world doing the thing she loves most, she's found her groove. True will enter August's three-part race — 0.93 miles swimming, 24.8 miles biking, and 6.2 mile run — rest assured that she's trained just as intensely as her opponents.

"The races are ultimately like the celebration of the training and I think I have to get around to the point where I recognize that I trained really hard," she explains. "I trained just as hard as my competitors, and you know, I deserve success just as much as they do."

According to True, discovering your passion involves opening yourself up to a vast variety of new experiences. She reminisces about filing her taxes as a full-time triathlete and realizing her income finally conquered the poverty line. There was never, as she described it, an "a-ha moment" when she decided triathlons would become her career. During college and even afterwards, she dabbled in a multitude of sports.

In other words, becoming a successful, world champion triathlete wasn't instantaneous. It was a series of small, oftentimes daunting steps and challenges. Triathlon isn't just her sport: It's her "obsession," her "passion."

True's journey towards her ultimate conviction highlights her autonomy and vigorous drive to be the best she can be. When she married fellow triathlete Ben True in 2014, some sports commentators diverted the discussion. Though she says she's proud to have adopted his surname and be associated with him, commentators began talking less about her athleticism and more about her personal life or about her husband's success.

The confidence True described earlier in her interview has also allowed her to speak out against this demeaning trend she's noticed for quite some time now. Speaking fervently, True offered sports coverage of skier Lindsey Vonn as an example. "People were more interested in when she was dating Tiger Woods than all of her amazing accomplishments, or by what she was wearing," she points out. "And that's really quite depressing to me as a female athlete because, yes, she's a beautiful woman with an interesting dating life, but that should never come up."

Although triathlon is generally insulated from such vapid coverage, there's ample room for improvement. According to True, coverage of her husband's races remained consistent after the two were married, while hers changed depending on the commentator or writer.

"There has been some media coverage recently, where all of a sudden, it's no longer that we are two accomplished athletes," True explains. "It's I am the wife of an accomplished athlete who happens to do triathlon and that's really, you know I just qualified for my second Olympics team."

If the tables were turned, she adds, that wouldn't be the case. And similar to the way any promotion of gender equality is treated by Internet trolls and their ilk, her claim has been met with criticism, but also with support.

"If you say something as a female athlete, I mean, there are actually a lot of people who are extremely supportive of the fact you're bringing it to light," True says. "Then there are always going to be the naysayers who just see you as this shrill woman who's just complaining, which is completely unfair."

Oftentimes, commentators' coverage of women's competition isn't purposefully off-topic. Unfortunately, the tendency to grasp any sort of sensationalist angle is ingrained in society, reaching far beyond any commentator's "personal vendetta."

Covering men's and women's sport in different lights creates a latent but damaging effect on prospective female athletes who hope to be recognized for their athletic accomplishments, just like a man would be. A sports event isn't a fashion show, and it's certainly not meant to be a segment of Entertainment Tonight. Hopefully, media coverage of the 2016 Olympics will take strong female voices like True's into account and help reverse what's become a concerning discrepancy.

True will be competing in Rio alongside fellow American Gwen Jorgensen.

To learn more about all Olympic hopefuls, visit teamusa.org. The Olympics begin on August 5.