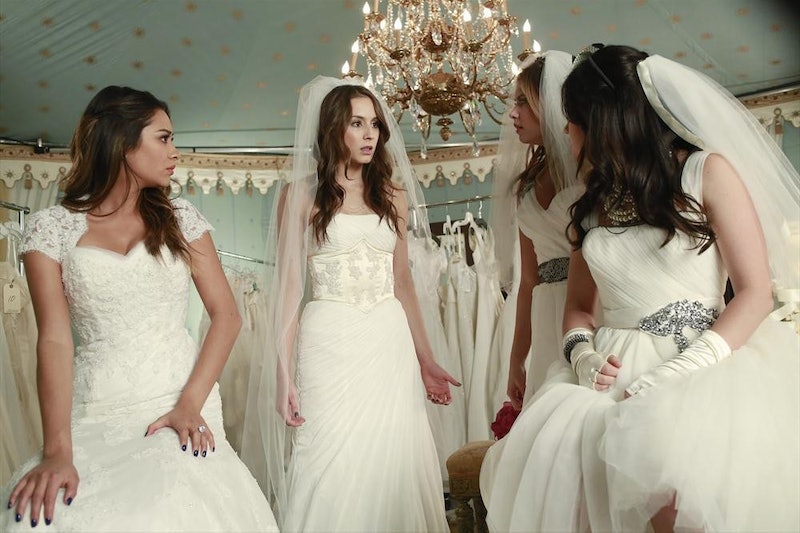 Pretty Little Liars may be about an omnipresent stalker harassing and torturing four friends, but that doesn't mean that the show doesn't take the occasional mystery break for some good ole fashion romance. If your favorite moments of Pretty Little Liars involve a steamy Spoby kiss or heartfelt Emison talk, then you'll likely love the show's upcoming Season 7, which premieres on June 21. According to showrunner I. Marlene King, Season 7 of Pretty Little Liars will be "the most romantic season" the show has ever had, and now, new spoilers from TVLine suggest that it's partially because wedding bells will be in the air. According to TVLine's spoilers, one of the Liars will get married in Season 7, and it might be even more of an OMG-worthy spoiler than Uber A's identity.

Though we previously learned that someone would be getting married on the series, this Pretty Little Liars spoiler confirms that the wedding will have particular significance, as opposed to, say, Byron and Ella's re-do of a wedding from Season 6. Now that we know for sure Yvonne and Toby won't be the couple the spoilers have referred to, we're looking at a seriously jaw-dropping PLL event. Of course, not every Liar has the same shot at getting married — here's how the events of the show suggest they will rank in the wedding department, from least to most likely:

Emily has possibly had the most love interests of any Liar, but Season 6B was strangely devoid of any Emily romance — instead of Emily returning to Rosewood to finally win the heart of her first love Alison, she watched as Alison married a doctor and then checked herself into a mental institution. I don't think that Emison is down for the count (especially considering how that doctor is a con artist after Alison's Carissimi Group fortune) and there's always the possibility that the returning Paige could start romancing Em again, but an Emily wedding would feel completely out of left field.

Spencer's boyfriend Caleb can't even say the L word to his girlfriend — oh, and he kissed her best friend/his ex-girlfriend — so I think it's safe to say that these two aren't sprinting towards the aisle. It's technically possible for Spencer and Toby to reunite, but for their reunion to end in marriage seems entirely too fast for both of them. Spencer was always the Liar least interested in settling down young, as she wanted to focus on her career before making any big life plans, so having Spencer get hitched would feel totally out of character for the Liar.

Hanna is the only one of the Liars that is actively engaged, and even if it's not to the true love of her life, Caleb, there's still a very real chance that Hanna could go through with her wedding to Jordan. If she doesn't, her and Caleb's kiss and the end of Season 6 could reignite that flame, and cause them to quickly get hitched. Of course, the thing stopping Hanna from ranking number one here is that there's a very real chance that she'll be kidnapped by A for quite a while — if she's even alive at all. Save Hanna, guys!

Sure, technically Aria is still with Liam, but there's no way that guy is going to last very long now that Ezra is back in the picture. An Ezria wedding would be exactly the thing that Ezra/Aria shippers have begged for since the pilot episode, and if these two weren't going to make that happen in Season 7, I'm pretty sure there would be Ezria riots.

How our girls grow up! No matter who gets hitched at this wedding, I'll likely be bringing tissues to the episode.