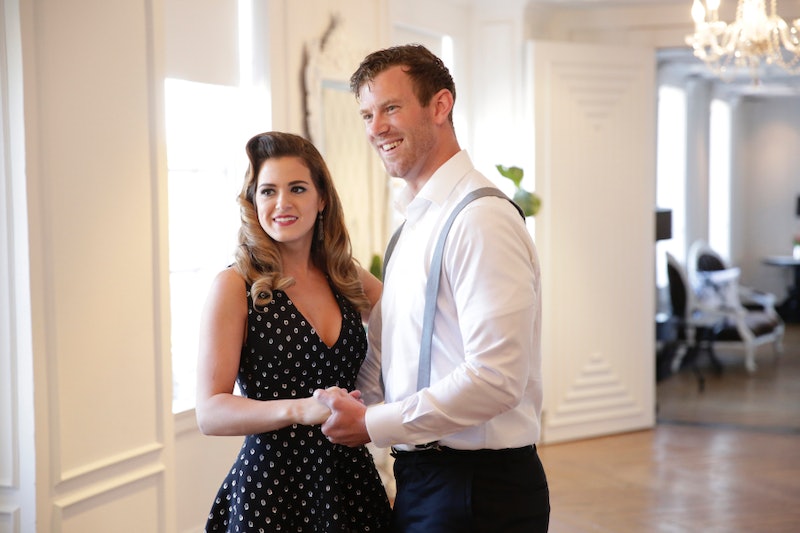 There are not a lot of experiences in life like The Bachelorette, and there's no way of knowing exactly what you're walking into when you agree to participate. But, because it's such a new, different experience, contestants can come out of the show with a renewed attitude towards dating and love. One Season 12 contestant, James Taylor says The Bachelorette was "truly the best experience" of his life for one important reason: He learned so much.

In an interview with Bustle, James recounts how he decided to go on the show after a friend of his nominated him. After three years without a serious relationship, he wanted to really try to find that special person. "I want to get married. I want to have a family," he remembers thinking before joining, "That’s really what I want in life; that’s way more important than a good job or anything."

And, James' best friend Marcus clearly knew that when he signed James up for the show — without even telling him! "I get a call from ABC and I’m like, 'You guys have to have the wrong number," he recalls. But, fortunately for all of us, the ABC casting people pressed on. "[They were like,] 'Nope, are you James Taylor and single?” And I said 'Yep!'"

So, in the end, he decided to go for it and he couldn't be happier with that decision, especially since it taught him so much. "You just learn a ton about yourself in that situation. Where there’s no cell phones, no computers, no TV, no Internet — just friends and a girl," James says. "It’s almost like you’re just on this little island with no one else to relate to, and you just have to dig deep and relate to yourself and go with it."

In addition to getting more in touch with who he was, the one big thing he says he learned about is how to treat a woman on a date. "If you think about [it's easy to] start taking an hour date with a girl for granted," James says about dating prior to the show. "And, then [on the show] you’re fighting for that. You’re desperate to have just you and the girl, because if not there are like 20 other guys who could go out there. You kind of appreciate [time] more."

James thinks that today's dating app culture makes it really easy to compare women to each other. It's an aspect the show removes — which is really for the best. "These days with all the dating apps out there, it’s easy to compare well, 'This girl is prettier,' 'this girl is smarter,' 'this one has better morals,' and 'this one is more fun.' But, sometimes we can do too much of that." The Bachelorette (usually) has just one woman in the center of attention, which James says made the contestants value the person for who she is. "I think every girl deserves that sort of chance," he says.

As someone who has been guilty of comparing potential dates too much, and who has been compared to others, I agree 100 percent. Let's give each person we date our focus and appreciate the time we get with them. In real life, we may not be competing with 20 other suitors for the same person, but that doesn't mean each man and woman doesn't deserve to be treated with the same respect as The Bachelor or Bachelorette.