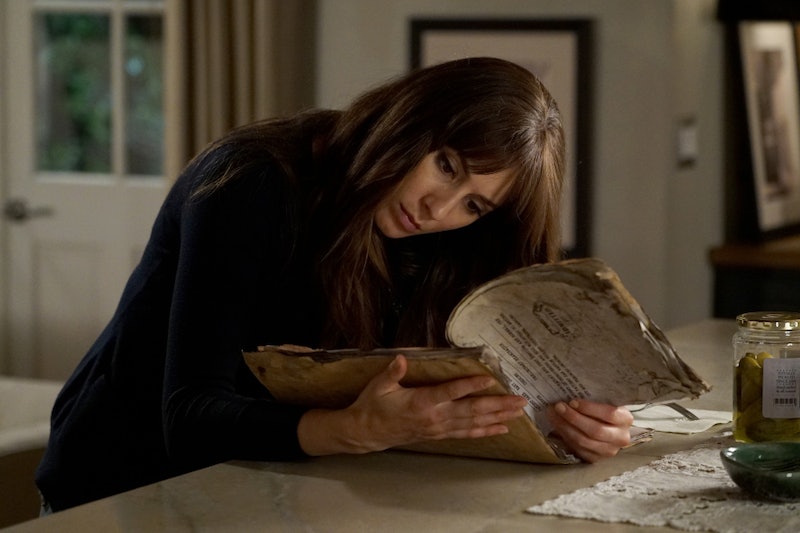 The Pretty Little Liars Season 6A finale contained a reveal that was arguably far more shocking than the long-awaited unmasking of A — Jessica DiLaurentis' secret twin sister, Mary Drake, and Dr. Rollins are working together and they're using a seriously creepy mask collection. For the first time, viewers know the identity of the show's villains before the Liars find out. But, of course, we're still totally in the dark about one very important plot point — who is A.D. on Pretty Little Liars? It's not enough for two people to be after the Liars, so a third Big Bad remains at large.

A.D. is the most dangerous Pretty Little Liars villain yet and he or she is currently holding Hanna captive. (Unless she's already dead, which is a possibility that I refuse to entertain.) As usual, everyone is a suspect — but some characters are way shadier than others. We know this mask enthusiast hides in plain sight, so it's possible that A.D. is a character from the Liars' past who has returned to Rosewood in disguise to torment them. Either way, they need to race against the clock this season in order to save Hanna's life.

Here are five people who we should keep a close eye on during Season 7:

Many Pretty Little Liars fans were shocked that Wren didn't turn out to be A, but that doesn't mean he's not involved. Julian Morris tweeted last year that Wren will return before the show ends — and his character still has a lot of sketchy behavior to answer for. Not only does he have close ties to all the Liars (especially Spencer), but he worked at Radley — a place where Mary Drake spent time and gave birth to Charlotte. It turns out Elliott Rollins has a British accent, which could mean he's connected to Wren and they've been working together. Plus, Morris recently posted this intriguing photo on Instagram:

He may just be messing with us because the mask could be for any role, but we know that masks are key to the latest A game.

Lucas has an axe to grind with Ali and he's helped out with the A game before. On the surface, it seems like he's being kind to the Liars — but maybe he wants them to stay at his loft so he can keep close tabs on them. He offers Hanna space at his factory to work on her own fashion line, which could be an attempt to keep her in Rosewood for as long as possible.

Also, his job is pretty mysterious — but we do know that he's supposedly traveling for business quite often. Maybe Lucas is actually traipsing around town in various masks stalking the Liars during these alleged "business trips." Plus, he has the tech skills necessary to be A.D.

Sara is clearly up to something — and it's a definite possibility that she's Mary Drake's daughter and Charlotte's biological sister. Not many people believe that she's telling the truth about her time in the Dollhouse and it seems likely that she was Charlotte's accomplice, not her victim. After all, Sara told Ali that Charlotte was "like a sister" to her — but maybe she meant it literally. She hasn't forgiven the Liars for the burning incident and she may believe they're responsible for Charlotte's death, so Sara has plenty of motive.

I know, I know — this would be a devastating turn of events, but it's possible. The theory first surfaced when Reddit user lyoushe pointed out that Emily asked Caleb, "how do you know how to build an electric fence?" in the Season 6A finale. This could have been a major hint that he's the person who built the electric fence that surrounded the Dollhouse. Plus, Caleb has tech skills and he's dated two out of the four Liars — and they all trust him. Perhaps Hanna's kidnapping was all part of Caleb's plan because, when you think about it, it's hard to believe that he would allow Hanna to offer herself up as bait without checking the entire room. I hope this theory isn't true, but it does make sense.

He didn't turn out to be A, but Andrew is still sketchy — and it hasn't been explained why the Dollhouse happened to be on his family's property. (We all know that there are no coincidences in Rosewood.) We also know that he was adopted, so it's possible that he's biologically related to the DiLaurentis clan. Jessica used to bring Charlotte, Jason, and Ali to the Old Campbell Farm, which could be a hint that Andrew has deeper connections to the family than anyone knows.

Whoever A.D. is, the Liars need to figure out quickly — Hanna's life depends on it.