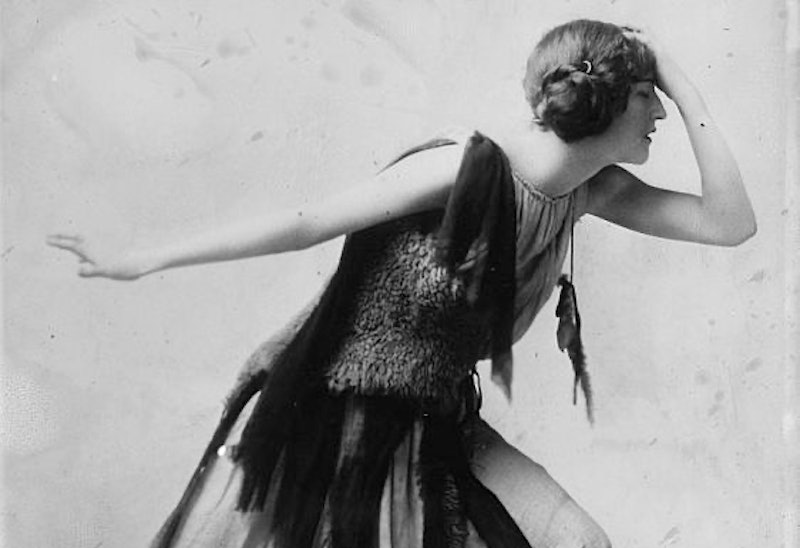 The 1920s were a time for radical change, and that included for one's wardrobe. With the end of World War I and a "live fast die young" mantra taken on by the new generation, fashion experienced a revolutionary shift, producing some scandalous dresses in the 1920s. With sleeves becoming passé, hemlines rising to flirty lengths, and corsets turning old-fashioned, a woman's silhouette became freer and more on display. The trend was called "la garçonne," whereby women took on almost boyish personas, opting for flat-chested, unrestricted, sporty dresses. But with the new styles also came the need to toe a certain line.

With restrictive girdles and long, bulky dresses becoming as untrendy as the 1980s Dynasty dresses of today, many ladies took on a "less is more" ideal when it came to style. But some women pushed the envelope a little further than intended, producing some sinfully wonderful and downright wicked outfits. From the dazzling Josephine Baker stepping on stage in nothing but a banana skirt, to "It Girl" Clara Bow dancing in Greenwich Village in a dress that seemed more shocking than a naked body, the flapper dress wasn't the only outfit that tested social boundaries. Below are nine of the most scandalous dresses of the roaring 20s.

Josephine Baker was a wildly successful singer and dancer in 1920s Paris — so successful, in fact, that she was one of "Europe's most popular and highest-paid performers," according to Biography.com. While she had many memorable acts and starring movie roles, one of her most famous and scandalous costumes was the banana dress.

Biography reported, "In a performance called La Folie du Jour, Baker danced wearing little more than a skirt made of 16 bananas." In a decade during which women were by and large still wrapping their minds around ditching corsets, stepping out in a couple of bananas and bare breasts was a total shocker.

Although today the little black dress is synonymous with all that is chic, back in the '20s it was a total head scratcher. It was shocking in its simplicity and had many people putting up their guard. New York Magazine explained, "It is now considered the epitome of classic good taste. But when Vogue published an image of Coco Chanel’s radically simple 'little black dress' in 1926, the style was derided by Paul Poiret as 'poverty deluxe.' Vogue predicted that the plain, straight-lined dress would be 'the frock that all the world will wear.'"

Isn't it usually the case that the trends the mainstream is most adverse to often become staples for later generations? Here's looking at you, women's denim and mini skirts.

Mae West was a sex symbol of the 1920s who had a penchant for starring in films that were about blatant sexuality and steamy affairs. Considering the era, it comes as no surprise that one of her costumes landed her in jail.

In 1926, West penned and starred in her Broadway play Sex , in which she played a sex worker who was out to get herself a rich man. Her play and costumes were so lewd that she got arrested and put away in jail for 10 days, as reported by the Examiner.

PBS added, "The plays thrust her onto the front pages, if not to the heights of critical acclaim. Her bawdy 1926 play Sex, the story of a Montreal prostitute, fills the house for a year before New York's deputy police commissioner raids West and her company, charging them with lewdness and the corrupting of youth." But in the ways of show business, the bad publicity only made her and her play more popular.

The flapper became a romantic image of wild and spirited ladies who danced to jazz and smoked cigarettes while wearing drop-waist dresses and slicked bobs. But when the flapper dress first came out, it was downright scandalous.

Fashionista gave some context, explaining, "While not every woman gave up her corset in the 1920s, those who did opted for drop-waist dresses that are still synonymous with '20s fashion. Back then, the style was also synonymous with promiscuity. (The word 'flapper' was interchangeable with 'girl prostitute' in the 1890s, but like many derogatory terms it eventually softened up to mean a spirited, flirty teenager.)" It would seem that when donning those sleeveless, ankle-baring shifts, the slut shaming was almost inevitable.

Clara Bow was the original "It Girl." She was one of the biggest stars of the flapper era, described as "a hard-partying jazz-baby;" one who was splashed across the tabloids more often than not.

And with a wild streak came some wild sartorial choices. Enter her arriving to a dinner soirée sporting nothing but a bathing suit.

David Stenn, author of Clara Bow: Runnin' Wild, explained, "When director Frank Tuttle invited her to dine with his family at the elegant Beverly Hills Hotel, Clara arrived in a belted bathing suit. 'It was a shocker,' one of Tuttle's daughters remembers. It was also a violation of both the hotel's dress code[s] and Hollywood's rule of formal dress for evening engagements, yet Clara couldn't fathom the fuss. Why should something she wore make someone else uncomfortable?" How shockingly wicked.

When just a short decade before, women were bundled into Edwardian garb that had a penchant for turtleneck-like dresses, a square-cut frock was perceived as pretty radical. While corsets were used to exaggerate a woman's curves, those curves were still hidden underneath yards of cloth. But in the '20s, necklines plummeted. Marie Claire explained, "The square-cut was the neckline of the decade, flattening the bust line after years of ample cleavage in corsets." Even though they were flattened, they were now on display.

My Lady Of Whims was a 1925 silent film about a wealthy young heiress who liked to get into wild shenanigans much to the annoyance of her father. She ended up getting into the bohemian, artsy crowd of Greenwich Village, where she stepped onto screen in this slinky, suggestive, and barely-there dress. With eyebrow-raising embroidery around her breasts and crotch, and a sheer, figure-hugging material, this frock was without a doubt R-rated.

This was the show that brought her critical acclaim success in Paris. According to Baker's official website, "Amongst a compilation of acts, Josephine and dance partner Joe Alex captivated the audience with the Danse Sauvage. Everything about the routine was new and exotic, and Josephine, boldly dressed in nothing but a feather skirt, worked the audience into frenzy with her uninhibited movements. She was an overnight sensation."

While a woman onstage with nothing but a couple of feathers might have been too shocking for an American audience, Parisians lapped it up.

In the 1927 movie Hula, Bow plays a strong character who not only wears pants, but seduces a married man by performing a tantalizing hula dance for him. Stepping on-screen with a grass skirt that had a penchant of flashing a brazen amount of thigh, a bandeau top, and a string of flowers around her neck, that was a scandalous amount of nudity for the 1920s.

Whether it was slinky dresses, banana skirts, or shockingly simple sheaths, there were all sorts of scandalous frocks in the 1920s. Some of them might still seem wonderfully risqué; most are downright PG now. But all this makes me ask: What contemporary racy styles will look like child's play in 100 years?

More like this
This 'Bachelor' Contestant Had The Best Reaction To Wearing The Same Dress As Another Woman
By Grace Wehniainen
The Internet Can’t Get Enough Of Viktor & Rolf's Upside Down Dresses
By El Hunt
12 Red-Hot Valentine's Day Outfits Perfect For The Holiday Of Love
By Dominique Norman and Kelsey Stiegman
J.Lo's Micro-French Manicure Has A Fun, Sparkly Twist
By Olivia Rose Rushing
Get Even More From Bustle — Sign Up For The Newsletter
From hair trends to relationship advice, our daily newsletter has everything you need to sound like a person who’s on TikTok, even if you aren’t.