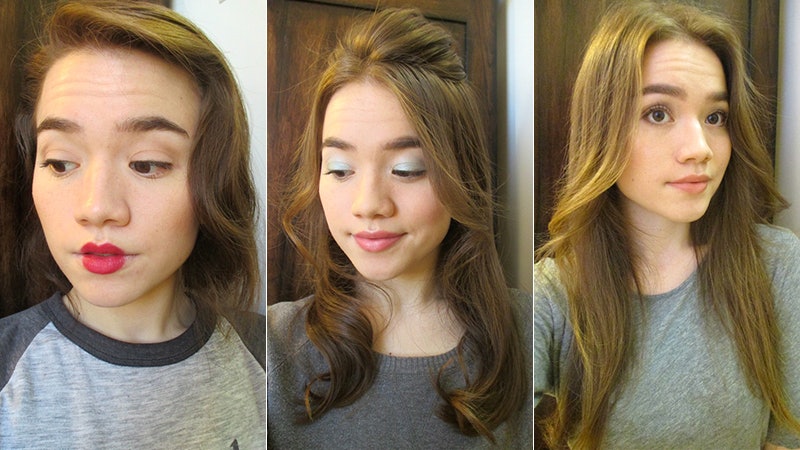 As a total beauty geek, I loved the "100 Years of Beauty in 1 Minute" video. (Although I also couldn't help wondering how much damage her hair suffered through all that styling...) So when my editor approached me about replicating the looks and recording people's responses to them, I was pumped. I love any excuse to experiment with makeup. And while this kind of experiment might not really work somewhere like New York, where people more regularly express themselves through fashion and beauty choices, I live in an area where everyone pretty much dresses the same (North Carolina, in case you were wondering).

But as rare as it is to see someone who prefers a distinct personal style, it's also rare to see someone comment on another person they find to be dressed or made up "out of the ordinary." So for this experiment, I had to mostly rely on the commentary of my family and friends while gauging the silent reactions from strangers.

To see if these retro interpretations of hair and makeup would be recognizable on their own, I paired every beauty look with my everyday clothes. And while I thought I would be able to play "Guess the Decade" with my friends and family, it was only the totally stereotypical beauty looks that were more accurately recognized. For the most part, a beauty look had to severely deviate from current beauty trends to even really go noticed as something belonging to another time instead of it simply being the crazy daughter/girlfriend/friend playing with her makeup again. However, the reactions to older beauty standards compared to today's gave me some insight as to why fashion and beauty trends are recycled.

First, a confession: I am not, nor have I ever been, a professional hair or makeup artist. Although I tried my best to replicate the majority of the looks from this video, I did find some difficult to do. For these, I conducted a bit of research so as to portray looks that were still relevant to their respective decades, but somewhat easier to do with limited tools. Here's what I came up with, and the reactions I received from friends, family, and strangers:

The Hair: Tightly curled and pinned back

I like your hair. -Woman (late teens) at DSW

The Hair: Waved edges and pinned up into faux-bob

I got a couple of side-long glances from women and one set of furrowed brows from a man at Target. All appeared to be in their 20's.

The Hair: Victory rolled and pinned up

Are you going to a party tonight? -Mom

I also caught a couple other women (around 30-40) in Ulta looking at my hair. Their expressions were not of judgement nor admiration, just curiosity.

I liked it better from farther away. -Mom

Angelic Snooki? Please don't ever go out in public like that. -Female Friend

While on a walk with my dog, an older couple who appeared to be in their 60s looked at my hair and then smiled at me but didn't say anything.

Hair is about right [for the '70s]. Wispy and blahh. -Female friend

And when I asked for her opinion (she won't willingly negatively comment):

The Hair: Voluminous side ponytail with crimping and small braids

I love the hair. Very eighties but I would so support this hair at the gym today. -Female Friend

When I pressed him for the decade he thought the look belonged to (since both my boyfriend and friend immediately knew), he responded with:

I received a couple of prolonged glances, but nobody said anything to me.

Your part looks a little old-school. Still good though. -Boyfriend

After taking each of these looks out for a spin, I found that there has to be a certain level of distinction for people to even notice, let alone say anything about them. Although beauty trends have clearly changed over the years, it seems as though the clothes might make a bit more of an impression than the hair and makeup. Even my father, who was born in 1945, generally did not recognize which time periods the looks were from when paired with my casual, everyday-type outfits. But even though most of these looks were not recognized as being on-trend for their respective decades, based on the reactions I received, I was able to compare these looks to current beauty trends.

Since my least-noticed looks were the 1950s and 1990s, I think this says that these beauty styles are the most similar to current trends. And honestly, with Taylor Swift's now-signature curly bob and red lip, and the brown-toned lipsticks making a comeback, this wasn't much of a surprise.

1980s was my most-recognized look, which I think speaks to the strength of the stereotypical 80's beauty look along with it still being a relatively recent retro look. Congratulations, 1980s, your big hair and bright eyes are still noticed!

Maybe this is because it reminds people of a time they wish they knew. Maybe they can simply appreciate that clearly more effort went into achieving those looks. Regardless, I think I understand now why the fashion and beauty industries tend to recycle looks: It's not necessarily because we can't come up with anything new, it's just that the oldies really are goodies.