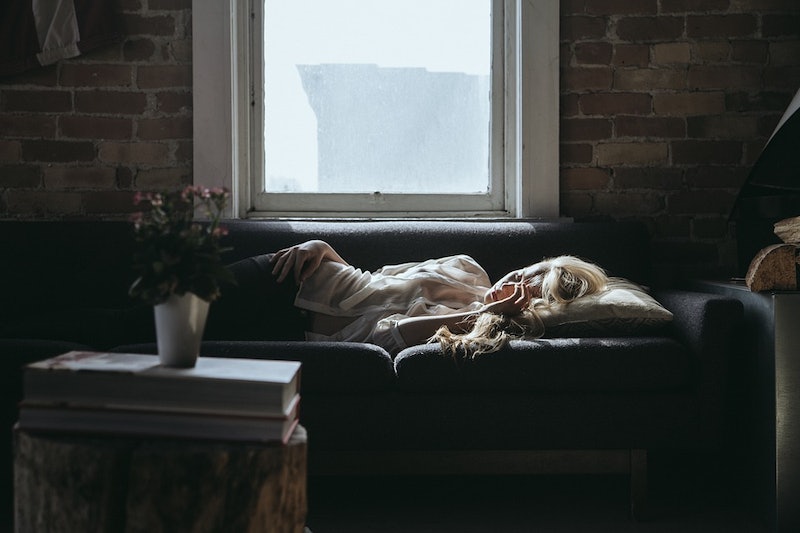 I love donating blood, so when I went to donate recently and was turned away due to low levels of iron, I was unpleasantly surprised. When I got home I looked into the signs you might have an iron deficiency, and realized nearly all of them were issues I had personally be dealing with. The symptoms were all around me, but I had been avoiding them, which — in retrospect — was a very silly move on my part.

If you’re someone who is cautious about your health, it's likely you are also one to consult your doctor when things seem off. However, some of the signs and symptoms of an iron deficiency can seem so minor to someone who’s the opposite of cautious — like me. As you’ll be able to tell from the points below, the body’s responses to low levels of iron can easily be passed over as something else. For example, we’ll talk about how exhaustion is correlated with an iron deficiency, but many of us might just think we’re burnt out from work and feeling more sleepy than usual. On the flip side, some of the signs of an iron deficiency are a little more startling (e.g., chest pains). Regardless, if you think you might have low iron levels, take a breeze through this article. If the signs and symptoms ring a bell, you should consider consulting your doctor who might recommend supplements or other treatment. Here are 11 signs you might have an iron deficiency.

1. Your Lips Tend To Be Cracked

Cracked lips can be the result of a whole slew of things — the weather, licking your lips, getting too much sun on them, and so on. However, they’re all telling as it pertains to iron deficiencies, too, when coupled with the other symptoms we’ll talk about below. According to Prevention, about one-third of the people who suffer from an iron deficiency are prone to angular cheilitis, a crackling of the lips at the corners of the mouth. What’s more, the cracking for these people tends to happen over and over again until the iron deficiency is treated.

2. You’re Tired All The Time

One of the biggest signs associated with an iron deficiency, according to Health, is that you feel wiped all the time. While the exhaustion is one of the biggest symptoms, though, it’s often the hardest to detect, the outlet added. They spoke to Nancy Berliner, MD, deputy editor of Blood, the journal of the American Society of Hematology who said, “Women are so used to having frenetic lives and feeling tired. They often just dismiss being tired as part of life.”

Why the exhaustion? The chronic feeling of being tired for those who have an iron deficiency is caused by the fact that when iron levels are low, less oxygen is reaching the body’s tissues, leaving the person striving for energy.

3. Your Skin Is Unusually Pale

Check out your complexion. Are you paler than ever before? It might be another sign you have an iron deficiency, according to Everyday Health. The outlet spoke to Marilyn Murr, MD, clinical assistant professor of family and community medicine at the School of Medicine at the University of Texas Health Science Center at Houston about iron deficiencies. Murr said, “When red blood cells become low with iron, they become smaller and paler in the center so skin also becomes paler.” The outlet suggested looking closer at the area around your bottom eyelid, as it might be an easy indicator to how pale your skin is.

That constant headache you’re having? It might just have to do with your iron levels being low. According to the Huffington Post, that oxygen that wasn’t reaching your tissues… well, that includes your brain, too. When the brain isn’t getting the proper amount of oxygen it can swell, which leads to that throbbing headache.

According to Blaire Morris, a nurse practitioner at the Vanderbilt Center for Integrative Health, who spoke to Women’s Health on the topic, many times those who have an iron deficiency will have a difficult time focusing. If you find yourself incapable of being able to focus on anything at work, for instance, consider if this symptom is coupled with any of the others we’re discussing here.

6. You’re Feeling Particularly Apathetic To Everything

Nothing seems to excite you at all anymore. This includes the projects you’re managing at work, the after work activities you usually loved, the relationship you’re in, and so on. According to the Iron Disorders Institute, this is yet another sign your iron might be low — a complete and total lack of interest in anything.

Numbness should never be something you dismiss as nothing. When it comes to your iron levels, numbness in your feet and hands might be indicating that the levels are way too low, according to Fox News. The outlet spoke to Dr. Dana Cohen, an integrative physician with a private practice in New York City, who said when your iron is low, your body will take blood from places like your feet and hands to bring it to other places in the body that it perceives to need it more. This leads to that numbness and/or feeling especially cold, the outlet said.

8. Your Period Is Really Heavy

If you’re one to have a really heavy period, you might also have an iron deficiency. Why, exactly? Basically, your body is losing too much blood. Health spoke to Jacques Moritz, MD, director of gynecology at Mount Sinai St. Luke's Roosevelt in New York City who said those who have especially heavy periods will only be able to replace about half of the blood they lose during their period in between cycles… and then it happens all over again. If you’re wondering what’s too heavy, the outlet suggested trying the tampon test — if you have to change it more often than every two hours it’s too much, and you should see your gyno.

9. You’ve Been Getting Pains In Your Chest

Chest pains are another sign you should never ignore. When it comes to iron deficiencies, specifically, they could be an indicator that something is off. Everyday Health cited chest pains as well as an irregular heart beat as going hand-in-hand with low levels of iron. This is because your heart is technically on overdrive, working harder than usual to keep the body supplied with nutrients while being low on oxygen.

10. You’re Out Of Breath Often

Let’s say you’re doing something simple, like walking down a flight of stairs. Somehow, you notice it’s leaving you feeling completely winded. This connects back to the lack of oxygen we’ve mentioned throughout this article. According to Kimberly Mueller, R.D., owner of Fuel Factor Nutrition Coaching, who spoke to Women’s Health on the topic, “Without enough iron in the blood, the body becomes starved for oxygen.” This, she said, can lead to that feeling of being out of breath, even when doing the simplest things.

A final — and very telling — sign you might have an iron deficiency is if you’re finding yourself craving odd things, like dirt, ice, or clay. Niket Sonpal, M.D., an internist and assistant professor of clinical medicine in the department of biomedical sciences at Touro College of Osteopathic Medicine in Harlem, New York, told SELF this is because people with low levels of iron may develop pica — a syndrome that causes people to want to eat things that aren’t food.

Do the above symptoms seem all-too-familiar to you? If so, you should see your doctor who can help set the record straight on what’s going on and provide guidance on the right treatment, as needed.