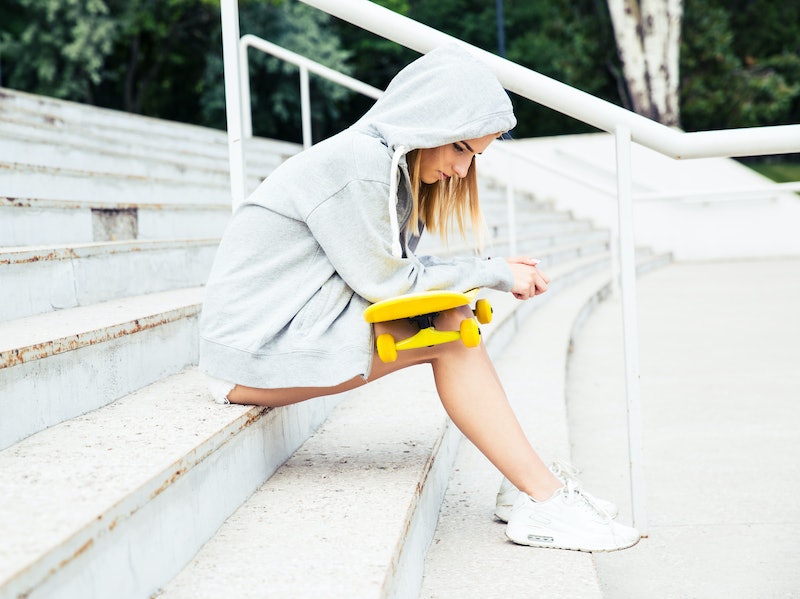 Usually when something is off in our bodies, one of two things happens. Some people immediately panic, hop on the Internet, and within an hour have diagnosed themselves with some fatal disease or rare condition. Others ignore the issue, bury any stress, and hope that it will soon pass. It's not ideal to indulge in either of these extremes, but there is a happy medium that can help you keep your body on track and assure that you're not leaving anything serious undiagnosed.

"I think the most dangerous sentence known to mankind is 'Maybe it will go away,'" says CEO of Physical Advantage Laurie Towers. "There are times when things are not going to be an easy resolution as far as healing, and we need to know when to seek out the right answers."

Whether it's something on your skin, an issue in your stomach, or overall malaise, it's important you know what symptoms are normal and what you need to get checked out. To make sure you aren't ignoring any important bodily signals, try not to dismiss any of these seven symptoms, and instead make an appointment with your doctor just to be sure. And whatever you do, don't panic! Not everything is always a serious issue, but it can't hurt to take precautions.

"These days with the glorification of busy, it’s hard to tell," says holistic nutritionist Sarah Jacobs. "But if you notice you’re perpetually tired, even after sleep, or that your brain isn’t functioning as quickly as usual, it could be a signal for a more serious issue."

Chronic fatigue can often signal a thyroid issue, a nutritional imbalance, or a food intolerance, among other possibilities. "Instead of relying on coffee to wake you up, it’s time to seek help," says Jacobs.

A rash on your nipple, also known as Paget's disease, can help you diagnose potential breast cancers or other breast diseases.

"[Paget's disease] is a chronic, erythematous, scaly plaque that forms around the nipple area of one breast," says dermatologist Jill Waibel, MD. If you have any redness or flaking of the nipple, get your breast checked out with your doctor.

If your knuckles are looking a little bit inflamed and purple, it may be a sign of dermatomyositis, an inflammation of underlying muscle tissue that involves a decline in collagen and results in discoloration and swelling.

Many of us tend to think "no pain, no gain," but pain during exercise is often a sign you may have an injury.

"'I was in the best shape of my life' often precedes 'before I got hurt,'" says fitness expert Debra Atkinson, MS, CSCS. "Extreme fitness and driven goals lead us to injuries that cause us to lose all benefits and set us back further than when we began."

"Many people experience occasional irregularity, but the generally accepted definition of constipation is having fewer than three bowel movements per week, difficulty having a bowel movement, or both," says board-certified gastroenterologist Dr. Anish Sheth.

This could be a sign of chronic idiopathic constipation (CIC) or irritable bowel syndrome (IBS). Discussing your issues with a doctor can help you figure out dietary and lifestyle changes or over-the-counter medicines that can help with your constipation.

6. Worst Headache Of Your Life

Everyone gets headaches here and there, but if the pain is becoming extremely unbearable, it could be a sign of something worse.

"Brain aneurysms are relatively uncommon, but the 'worst headache ever' is a sign to be checked for that serious issue," says Dr. David Parish. If you have a localized pain that causes nausea or blurry vision, you should see a doctor immediately.

"Thinning hair in women can be a sign of more than a bad hair day," says Arielle Levitan, MD. "It can signify underlying medical problems, such as thyroid disease or other autoimmune diseases."

Diminishing hair can also be a sign of a nutritional deficiency, such as vitamin D or vitamin B, or a hormonal imbalance.