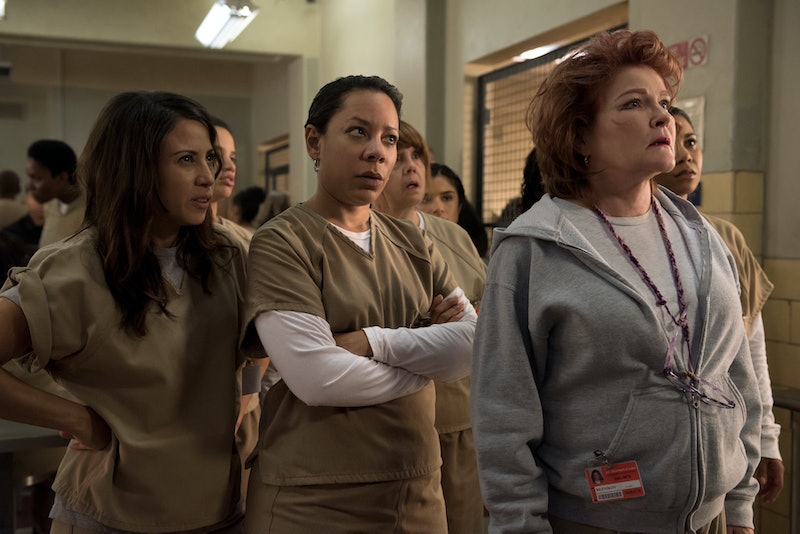 Orange Is the New Black has always taken on women's issues, and in Season 4, they raised a big one: Access to tampons and pads. Beware some mild Season 4 spoilers ahead, but it's no spoiler to say that periods are something that affect a lot of women. Most of the women behind bars need those products, and when Litchfield started rationing pads and tampons, OITNB found another major thing that resonates as not just a dramatic choice, but in the real world. The characters are a mix of disbelieving and disgusted that MCC, the corporation that runs Litchfield, has decided not to increase the number of free pads available for the women, even though the number of inmates has practically doubled.

And to add a class element to the problem, the ladies are shocked to find that the only way for them to get additional menstrual products is incredibly expensive — each box of tampons is 10 dollars at the commissary. Over the course of the season, the ladies are seen attempting to ration single tampons and pads over multiple days, worrying about being able to afford some of the limited supplies.

In real life, there's lots of cases that are similar to the period issues on OITNB, even for women who aren't incarcerated. A NY Mag article from 2015 ran with the headline "Menstruation Can Become Humiliation in Prisons." And it goes on to describe almost the exact same situation as what's going on in the show, right down to the exorbitant charge, in this case $4.23, for a box of tampons from the prison's commissary. There are tons of similar stories out there, from a first person imagination exercise from PeriodView, Ms. Magazine's piece from all the way back in 2010, to an insistence from The Guardian that withholding pads and tampons is a denial of basic human rights.

And as a part of an ACLU case in Michigan in 2014, inmates alleged that they're routinely denied access to pads and tampons, citing it as one of the many indignities they face on a day to day basis. Looks like the Litchfield ladies are not alone. There's even a whole essay in the Internet Journal Of Criminology by Catrin Smith called "A Period in Custody: Menstruation and the Imprisoned Body" that deconstructs the relationship between female prisoners and their periods.

However, there is progress in the non-Netflix world. New York is taking major steps towards making sure free pads and tampons will be available at all schools, homeless shelters, and jails. But I don't think the women of Litchfield will get similar relief, since MCC, as a private company, seems somewhat exempt from similar legislation. I mean, they've cut almost everything out of their budget, and with someone like Linda from purchasing working there, it seems that the prisoners' humanity doesn't really matter. After all, when Caputo and Linda go to CorrectiCon, a convention for people who work in prisons, there's pointedly a booth offering menstrual cups as a low cost alternative to more pads or tampons — but that's overlooked in favor of hijinks at a laser demonstration.

The lack of concern for the women of Litchfield's access to pads and tampons so they can take care of their menstrual cycle with minimal degradation is a staggering development in Orange Is the New Black Season 4, but it makes sense when you think about how quickly periods — and the products they require — can be overlooked. Hopefully with OITNB giving periods the spotlight, real change will be soon be effected in the real world too.