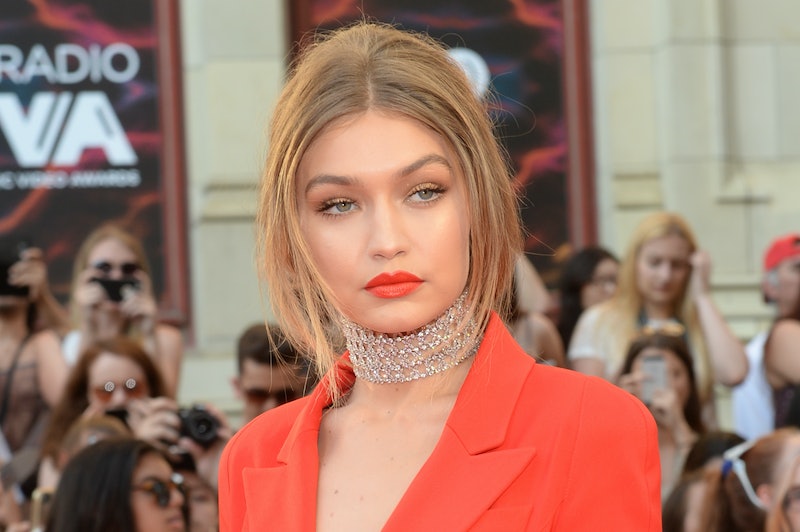 Gigi Hadid is near perfect. Sure, some may think I'm exaggerating, but in my eyes, everything from her style to her makeup is flawless. So flawless, in fact, that you'll be wanting to get Gigi Hadid's Max Mara makeup look, which was released on Tuesday. Her most recent ad work has the gorgeous supermodel — yes, supermodel regardless of what some may say — looking stunning in a mix of neutrals, lashes, and bronzed cheeks. Basically, it's a perfectly classic look that'll always be flawless. Hadid only elevates the style.

This isn't the first time that Hadid's print work has featured a stunning beauty look as well. She and sister Bella Hadid's work with Balmain featured some seriously spectacular dark smoky eyes, and her photos with ex-boyfriend Cody Simpson for Mario Testino's Towel Series showed her nearly bare faced. Basically, she can rock any look. Hadid's Max Mara makeup took it to another level, though.

The young model is known mostly for her perennially on-fleek brows, but in her second print campaign for Max Mara Fall/Winter 2016 Accessories, it's the eyes that have it. With a dramatic liner, wispy lashes, warm toned shadows, and a nude lip, it was basically your new going out look for the summer. Mix in some bronzed cheeks and those full brows, and you've got a look that's sure to pop up on your favorite YouTuber's channels very soon.

Hadid's makeup is definitely designed to make her eyes appear more almond shaped as the majority of the color is concentrated on her outer corner. This YouTube tutorial is a great place to start for getting a similar natural look, just be sure to smoke out your outer corner.

The Hadid eye look uses techniques often used by those looking to make their eyes appear bigger. Turns out Jaclyn Hill has a tutorial just for that, and it's not too far off from Hadid's look in the Max Mara ad.

Part of what makes Hadid's look so sultry are the wispy lashes she is rocking. The natural looking lash is stunning and adds some drama to the look.

Hadid's cheeks are a gorgeous peach bronze, and to copy the look you'll need to know how get that same bronzy cheek.

Gigi Hadid's Max Mara ad for the Fall/Winter 2016 accessories collection is sure to make a splash in the makeup world, and I have little doubt it'll be making appearances on YouTube very soon.