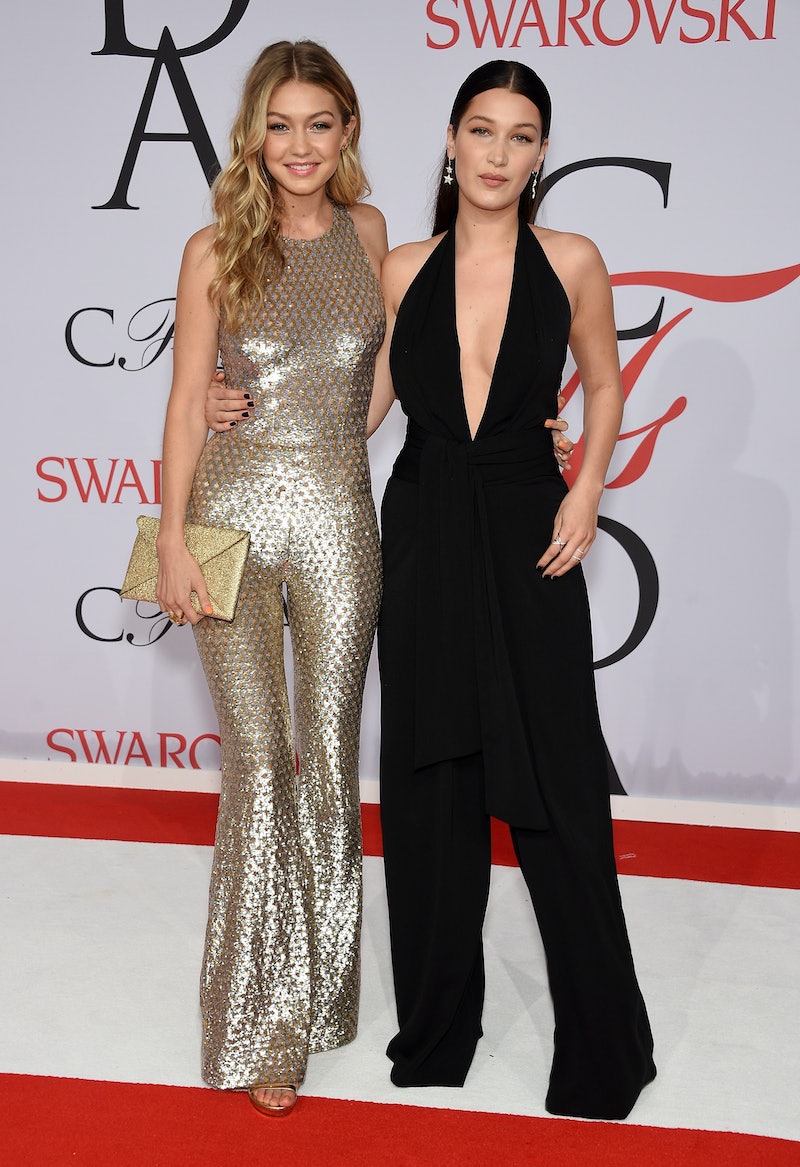 Sibling rivalries are part of everyday life. One minute brothers and sisters are BFFs, but the next, they're arguing over something silly. As seen with celebs like Khloe Kardashian and Kylie Jenner, all siblings have their spats. But at the end of the day, they'll do whatever they can to have one another's back. A perfect example of supportive sibs? Gigi and Bella Hadid. In British Vogue, Gigi talked about her relationship with Bella and how she's super protective of her little sis — but in the best possible way. If someone messes with Bella, Gigi says, "It's like the end of your life pretty much." Proving how much she supports her sister, the Victoria's Secret model shared this anecdote. She said,

Backstage at a show in Paris, for some reason they let photographers take pictures while girls were changing, which just pisses me off. My sister's changing next to me and I was like, "If you don't put that camera away and stop shooting my sister, I'm going to come over there, I'm going to take that camera, and throw it on the floor."

Bravo, Gigi! That sounds way too invasive and the photographers were out of line. It's awesome that the 20-year-old is willing to stand up for her sister and always manages to put family first. Although she threatened to throw an expensive camera on the floor, Gigi is way more chill when it comes to her sister stealing her clothes, explaining,

Now we don't even live together and she still does. I don't take anything when I go to her house but she manages to be like "I came here in gym clothes and now we're going to dinner and I need..." Bella, bring back my belt!

Ha! Sounds like the common sibling struggle, but it's nice that she always shares with her sis. At least it doesn't result in a full-blown fight. (Cough, cough, Kendall and Kylie Jenner.) Borrowed clothes aside, this isn't the first time these family member were supportive. Here's a list of other reasons that Gigi and Bella are the ultimate sibling goals.

Their mom Yolanda Foster has been open about her battle with Lyme disease. Bella and brother Anwar Hadid also have the chronic illness. Gigi says she does everything she can to be there for her mom, brother, and sister as they struggle with their health. Gigi considers her family members her best friends, saying, "You know when we need each other we're always there."

2. Bella Avoids Comparing Herself To Her Sis

Considering they're both supermodels, it's easy to assume these two view each other as rivals. But nope, not the case at all! In her cover interview with Seventeen, Bella talks about their relationship and why comparisons aren't worth it. The 19-year-old said,

I just have to remind myself that she's been doing this forever. I can't keep comparing myself to her because we're so different. But people still love to compare and contrast us — what's better about her or what's not that good about me — and it's hard because people are really mean.

From the H&M x Balmain campaign to an editorial in LOVE magazine, Gigi and Bella occasionally model together. While some siblings would probably fight too much to do that, not these two. When they starred on the cover of V magazine together, Gigi excitedly shared the picture on Instagram and admitted that they sang Broadway songs together all day. (Add that to the list of reasons these two are awesome!)

4. They Celebrate Each Other's Accomplishments

Whether tweeting excitement about each other's runway appearances or snapping pictures with their magazine covers, Bella and Gigi are constantly cheering each other on in their work. When Gigi walked in the Victoria's Secret Fashion Show, Bella posted the following tweets.

All in all, these siblings are part of an incredibly supportive family! And the main lesson here? Don't mess with Bella or you'll have to deal with Gigi — and vice versa.