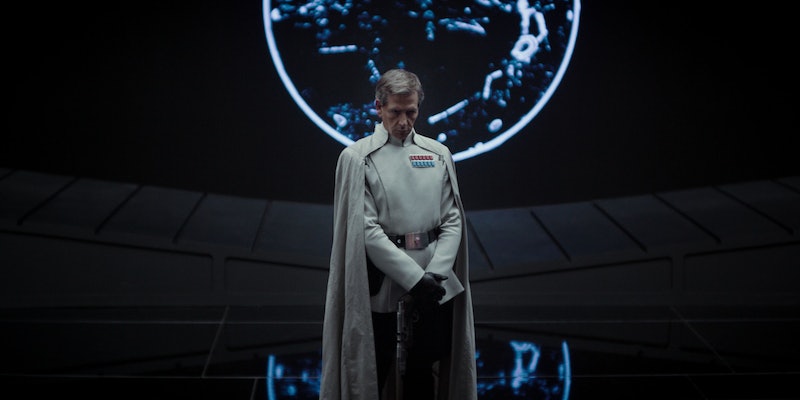 If there's one thing I can always count on the Star Wars franchise for, it's keeping me at a heightened state of excitement at all times. On Wednesday, Entertainment Weekly revealed plot details for Star Wars: Rogue One on their July cover. Honestly, I probably would've been satisfied with just one of those reveals — either the photo or the deets — but the combination of the two feels like an embarrassment of riches that I'm going to do my best to be worthy of. Because, you guys. There are some serious spoilers for the film getting leaked, here. Granted, it's Disney and Lucasfilms themselves doing the leaking, but they're really giving us a look into what to expect from the film, well in advance of its Dec. 14 release date.

So if you aren't interested in learning a thing or two or seven about this movie and the secrets it may hold, I'd highly recommend clicking away from this little ol' post, because the EW story is chock-full of revealing details and exciting semi-spoilers. I don't want to scare you, but it could send you into actual paroxysms of excitement. And without any smelling salts nearby, I can't be responsible for your wellbeing. So here are the most exciting things we learned from the Rogue One cover of Entertainment Weekly, OK? Read at your own risk.

1. No Single Person Was Behind The Theft Of Those Schematics

Ever since it was revealed in the pre-movie crawl for the original Star Wars in 1977, it's been clear that the theft of the schematics that revealed how to destroy the Death Star was the game-changing move that set this entire series of events into motion. Up until now, you might've assumed one individual was responsible for the brazen heist, but it turns out it was a team of Rebellion members all working together. Kind of like an Ocean's Eleven in the sky. (Did I ruin it? Is it ruined?)

2. They're Really Embracing Jyn Erso Being Front And Center

I know we already knew this from the Rogue One trailer, but it warms my cold cold heart to see a franchise as huge as Star Wars really pulling for a female lead. Obviously they tried that pattern out with Rey in Force Awakens, and it couldn't have gone better, so there's a lot of incentive to repeat it with Jyn Erso, and the move of putting her literally front and center on the cover feels like a great promise to fans that they're going to fully utilize Felicity Jones and her talent.

3. They Give Us Some Emotional Motivation For Jyn

We already knew that Jyn Erso had scuffled with both the Empire and the Rebellion, and that the Death Star mission is her opportunity to choose a side once and for all, but there's also a personal element motivating her. Jyn's father, played by Mads Mikkelsen, is a scientist who has some piece of information that both sides are interested in. (Some have speculated that he's the original designer of the Death Star, but there's no confirmation on that, just cryptic references to something explaining "how the universe works.") And since Jyn's own relationship with her father and how he left their family has been shrouded in mystery, this sets up quite the compelling dynamic.

4. We Meet A New Villain

His name is Director Orson Krennic, and he's played by Ben Mendelsohn. Krennic is an officer within the Imperial Forces, and he's determined to rise through the ranks and make an impression any way he can, while also avoiding the punishing gaze of Darth Vader. In the words of John Knoll, who wrote the story:

The bad guy is a lot more terrifying when he’s really smart, and really effective. There is a lot of palace intrigue going on in the Empire, with people conspiring to move up the ranks and sabotaging each other. There’s not a lot of loyalty there.

Sounds like he's gonna be a real problem for the Rebels.

5. We Learn About Character Dynamics

The relationship between Jyn Erso and Captain Cassian Andor, played by Diego Luna, sounds especially fascinating to me, because their personalities balance each other out, making them ideal partners. Jyn is the more volatile of the two, while Cassian is more solid and pragmatic; just the kind of reliability you need in order to balance out the bold passion of Jyn.

6. We Meet A Pair Of Warrior Monks

Their names are Chirrut Imwe and Baze Malbus, played by Donnie Yen and Jiang Wen, respectively, and that have a similarly balanced relationship to Jyn and Cassian. Chirrut is blind and has used his deep belief in all things Jedi to overcome that handicap, while Baze rejects his spirituality in favor of out-and-out force. But despite their disagreements, Baze will protect his friend at all costs.

Wouldn't have been a true spinoff without a new droid tottering around, making wry observations interspersed with little beeps and clicks. Interestingly enough, K-2SO, played by Alan Tudyk — you can call him "Kay-too" — is described as the complete opposite of C-3PO. In the words of director Gareth Edwards:

Kaytoo is a little bit like Chewbacca's personality in a droid’s body. He doesn’t give a s**t about what you think. He doesn't fully check himself before he says things and does things. He just speaks the truth.

And his past is apparently just as complicated and checkered as Jyn's, because he has some wrongs behind him as well. Innnnteresting.

8. We Get A Glimpse Of Forest Whitaker

There's so much excitement and mystery around Forest Whitaker's Rogue One character that they can't even tell us his name yet — because we'll apparently recognize it from canon, even if he doesn't look like the character we recognize, and it will inform us on his past. Literally can't imagine what this could mean, but am so excited to find out.

And that's not even the half of what we know so far, but it's a lot to chew on so far. So in some ways maybe it's a good thing that we have all the way to December to wait, and the rest of the Entertainment Weekly special to read? Hey, I'm doing my best to find a silver lining, you gotta work with me here.