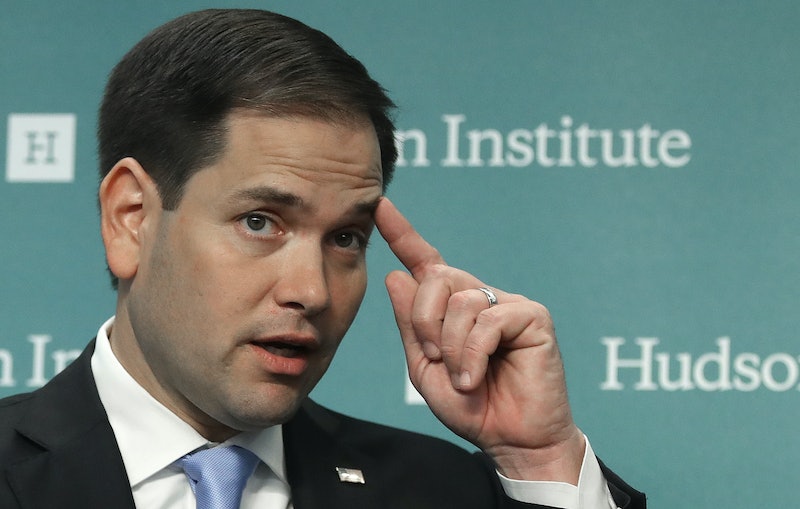 On Wednesday, former presidential primary candidate and Florida Senator Marco Rubio announced his bid for reelection, sending meme generators into a frenzy. And quite frankly, there's couldn't be a better way to sum up his sudden change of heart. After dropping out of the presidential primary race, Rubio insisted that he would not run for reelection in the Senate. Instead, he would go on with his life as a "private citizen." After being pressured by fellow Republicans — including Trump — who believe Rubio's re-election could help Republicans maintain a majority in the Senate, Rubio backtracked on his former statements.

Rubio's no stranger to politics. In his reelection announcement, which is posted on his campaign website, he beat the haters to it, admitting he flip-flopped. But let's face it, politicians are humans too.

In politics, admitting you’ve changed your mind is not something most people like to do. But here it goes ... I understand my opponents will try to use this decision to score political points against me. Have at it. Because I have never claimed to be perfect, or to have all the answers.

Essentially, Rubio wants to remain in Congress so that he can help keep the future president in check, whether that president is Hillary Clinton or Donald Trump. The Florida Senator doesn't like either of them, though he said he would try and help steer Trump in the "right direction."

No matter who wins the White House, we need a strong group of principled, persuasive leaders in Congress who will not only advance limited government, free enterprise and a strong national defense, but also explain to Americans how it makes life better for them and their families. I ultimately changed my mind about this race because on that front, and in that fight, I believe I have something to offer.

Rubio may have justified his decision in a coherent manner, but people will never forget:

These memes show just how difficult it is for politicians to go back on their word. It's going to be a long time before Rubio lives this one down. But he seems up for the challenge.

1) Don't Get Too Excited

This definitely will not happen now.

The GOP is Rubio's Juliette, if we're talking about the famous Shakespearian play. He just can't resist.

3) His Presidential Campaign Def Distracted Him

Hopefully he does a better job this time around ... if he wins.

This was posted weeks ago, but it's so relevant. Mood.

Politics can be corrupt ... just sayin'.

Can't ever drink too much water.

Will the state take him back?

11) This Person Is Delighted

Ru(bae)o shirts are back in style.

I doubt she actually feels this way about the Republican.

He's going to have to prepare himself for the backlash.

More like this
How To Curl Your Hair With Leggings, According To TikTok
By Carolyn Steber
Ashamed Of Your Screen Time Stats? Here's How To Change That
By Alexis Morillo
Learning To Love, Not Judge, The Lunchbox Wives Of TikTok
By Esther Zuckerman
This Wordle Rival Is Taking Social Media By Storm
By Sam Ramsden
Get Even More From Bustle — Sign Up For The Newsletter
From hair trends to relationship advice, our daily newsletter has everything you need to sound like a person who’s on TikTok, even if you aren’t.