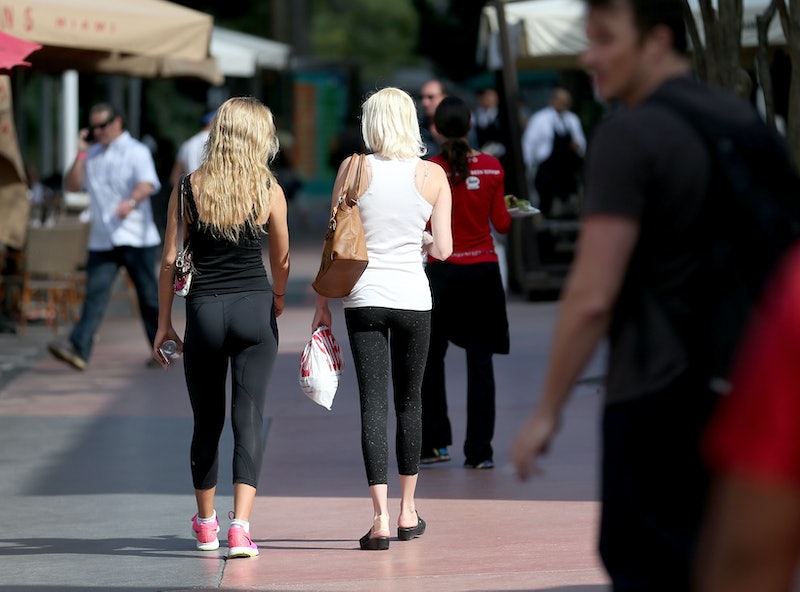 There are many things that can be "wrong" with a woman’s appearance. There are the things you can change with a significant investment of time and money — and changing them is seen as a personal responsibility, because products exist to correct whatever horrible genetic situation you have been cursed with. These are things like having skin that’s moisturized and properly exfoliated, perfect eyebrows filled and waxed into shape, cheekbones hollowed with contour, a hairless upper lip, no acne, smooth legs, and underarms without the suggestion that hair ever grew there.

Do all of that right, and then you're dealing with parts of your body you can’t really fix: eyes that are too close together, thin lips, big ears, short limbs, big feet, a nose that’s anything other than small and upturned (but god help you if your nose job is obvious). Even Megan Fox, an artificial intelligence program designed to cause boners, is roundly mocked on the Internet for having “toe thumbs.” (Google it. Or don’t.)

If you are Fat, you will be made aware of it every day of your life, through explicit comments made either by strangers on their computer screens, strangers on the street, or people in your life who Mean Well. There will be the wordless glances or small tsks that are meant to be understood: Take up as little space as possible.

If you get pregnant, you’ll either gain too much weight or too little, and the moment you have the baby, a game show-style countdown clocks begins until you “get your body back.” Do not have Mom Hair, or wear Mom Jeans. Do not look like a mother, because you should look as though you’re still in your sexual prime (unless you’ve Let Yourself Go). Begin a new regime of moisturizers and expensive eye creams to prevent wrinkles. Too late: you were supposed to start when you were 20. Hope you can afford Botox.

All of this is to say, for a woman to be visibly imperfect is to invite criticism.

Any failing is a chink in your armor, a small hole in the dam that holds back the unending, infinite flow of people who feel entitled to comment on your appearance.

The first time I posted a joke I wrote on the Internet, half a dozen commenters informed me that my smile was too gummy (the joke, needless to say, was not gum or smile-themed). A gummy smile; I didn’t even know that was a thing that could be wrong with me. Commenters online provide a verdict on a woman’s fuckability without context or personal investment, like they’re the first ones answering a riddle. There's an invisible knife at the neck of every woman in the public eye, a wordless threat to anyone who would try to make art or put ideas into the world.

"Brush it off" is easy advice to give. It's much easier to tell someone to "brush it off" than it is to address a society in which women are seen as defective if they're imperfect. There is something that needs to be reckoned with when a woman’s appearance becomes fair game for the type of dispassionate critique one might expect of the judge at a dog show.

And so, now, I beg of you: Stop calling women “basic.”

If a woman has miraculously, improbably managed to achieve an impossible level of physical perfection, what comes next but a moving of the goal posts. Now, it’s her very taste that we can criticize.

The threat of "basic" declares that you are not allowed to like things — things that objectively everyone should like! Vanilla lattes are delicious, yoga pants are convenient, Ugg boots are comfortable.

But it doesn’t matter, because the secret is the game is rigged against us. If you order white wine, you’re basic; if you order whiskey you’re trying too hard; if you drink vodka and Diet Coke, you’re “very college.” A preference is a personality. A woman cannot be someone, or she’s someone men can dismiss and other girls can whisper about behind her back.

Because that’s the other secret: it is more often women calling each other basic, most often as a way to make ourselves feel better. The context is you and your best friend, looking at the Facebook pictures of the new girl your ex just started dating. “Ugh, look at her,” your friend will say, trying to be helpful. “She’s so basic.” In that moment, you will feel better. You are not basic!

There is a paragraph from Lindy West’s magnificent memoir, Shrill, which I’ve forced everyone in my life to read (ideally while I stare at their face to gage their reaction):

Women matter. Women are half of us. When you raise women to believe that we are insignificant, that we are broken, that we are sick, that the only cure is starvation and restraint and smallness; when you pit women against one another, keep us shackled by shame and hunger, obsessing over our flaws, rather than our power and potential; when you leverage all of that to sap our money and our time – that moves the rudder of the world. It steers humanity toward conservatism and walls and the narrow interests of men, and it keeps us adrift in waters where women’s safety and humanity are secondary to men’s pleasure and convenience.

Criticize women, by all means. But pay attention to whether women are being criticized for their ideas or for their appearance. Protect other women. Please. Because you, and me, and all of the women in the world have too many important things to say and create for us to feel any insecurity when we might want to wear a pair of stretchy pants.

More like this
Wimbledon Alters All-White Kit Rule Amid Candid Period Discussions
By Catharina Cheung and Rachel Mantock
Claire Foy & Rooney Mara Revisit A Devastating Tale In 'Women Talking'
By Bustle UK
Are Sagittarius & Capricorn Compatible In A Relationship? Astrologers Weigh In
By Kristine Fellizar
Bumble's "Compliments" Feature Lets You Message Before You Match
By Lexi Inks
Get Even More From Bustle — Sign Up For The Newsletter