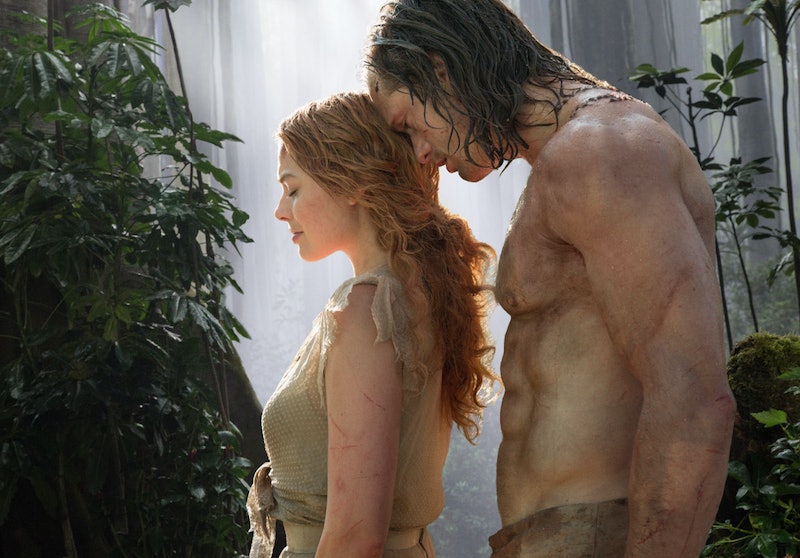 Most people are only familiar with the 1999 Disney movie Tarzan. But while that fantastic movie is memorable for having a killer soundtrack, it's actually based on a series of books written by Edgar Rice Burroughs that focus on the intrepid jungle hero, Tarzan, and later on his life with wife, Jane, and son, Korak. Now, however, Alexander Skarsgård is about to continue Tarzan's story and bring him to life in the upcoming film The Legend of Tarzan. This isn't the Tarzan story we all know and love — it's about what happens after. So, if it's about after... when does The Legend of Tarzan take place?

There's no official word on the "time period" of the Tarzan novels, but many have assumed through the context clues and general state of the world in the novels (British Empire colonizing Africa, etc.) that the early 1900s seem to be the key Tarzan time period. The first novel, Tarzan of the Apes, was released in 1912, and it's safe to assume the books also then pick up in 1912, with Tarzan's family shipwreck happening somewhere in the late 1880s — early 1890s.

But that's the first Tarzan, the one where Tarzan meets Jane. Tarzan saves Jane. Jane saves Tarzan. They fall in love. Then, Tarzan and Jane discover Tarzan's real identity - John Clayton, Viscount Greystoke. So, not only is he the ultimate jungle man, he's also the lost heir to a British title. Eventually, Jane and Tarzan go back to England where Tarzan aka John reclaims his title and becomes a refined, dignified British Lord. That, presumably, is where The Legend of Tarzan picks up.

Now, since Tarzan seemingly takes place around 1912 and the film seems to start with Tarzan having lived in England for a number of years, it'd be natural to assume we could be looking at a time period anywhere from 1916-1927. But actually, the film takes place in the last 1800s, around 1890. It'd be easy to not catch that exact date, though, as from The Legend of Tarzan trailer, the clothing seems consistent with that of Victorian/Edwardian/WWI era African expansion, so it's not as easy to pin down a specific year.

One thing that's definitely clear is that this isn't the tame Disney Tarzan fans have come to love. This Tarzan seems grittier, darker, more lethal. I'm eager to see what new tale the writers have created for the character, and I hope it does Edgar Rice Burroughs and his fearless hero proud.