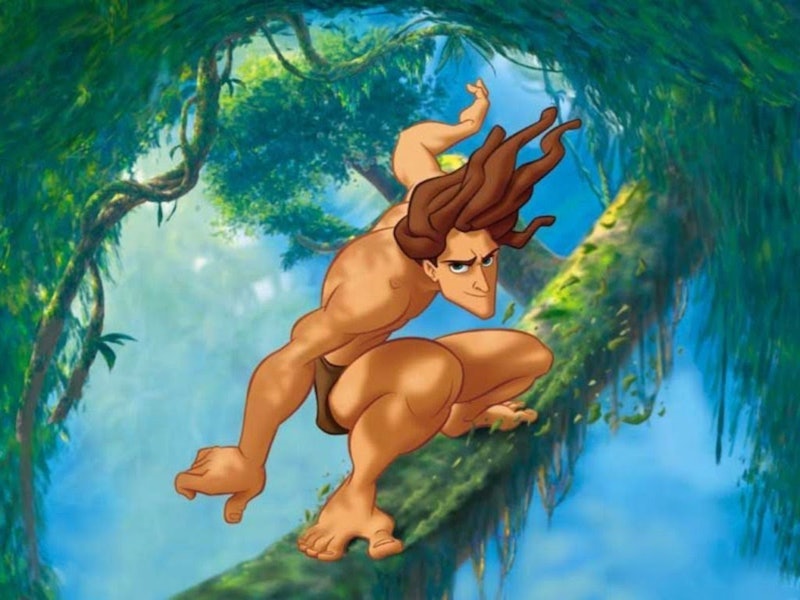 It isn't hard to get women to wax poetic about the beauty that is Alexander Skarsgard; watching the briefest scene from True Blood or glancing at a particularly sultry magazine spread is reminder enough that this guy is beyond gorgeous. Now that Skarsgard is starring as the titular jungle man in the live action adaptation of The Legend Of Tarzan , you can now definitively say that the King of the Jungle is your new onscreen crush. But while Skarsgard certainly gets points for bringing sexy back to the big screen in this Warner Bros. film based on the novels by Edgar Rice Burroughs, there is one thing we all really need to discuss: is it OK to think that the animated Tarzan was hot in the first place?

First, let's revisit the movie. The 1999 Disney animated film features a combination of animals and human beings. Technically Tarzan is a tale of two worlds colliding, but it's also very much a love story. Jane, a "proper" woman, and Tarzan, the "jungle man," come from two very different worlds, yet find themselves immediately attracted to one another. Here's where the big question comes in, as Disney, uh, really did its best to make sure that Tarzan looked really great:

It's no secret that Disney characters are designed to be what the masses might deem as good looking. (Unless you're a villain, and then you're stuck with dramatically bizarre features, a la the Ugly Stepsisters from Cinderella.) Heroes are handsome, and in Disney princess films, they are associated with adjectives like "charming." They are good with words and look dashing in a suit. But Tarzan? He doesn't even get the suit. (Words are also not his thing.) Instead, Tarzan has muscles, and lots of them.

Unlike Disney princes, whom we were told from a young age were the ideal man, Tarzan made up for his lack of status or "charm" with brawn. There would be no moonlight dances for Tarzan and Jane, but there would be a lot of shirtless Tarzan moments for Jane to witness. It sure seems like Disney wanted us to know that he was hot... but not everyone is super comfortable coming out right and saying that an animated character is even supposed to be sexy.

I spoke to a few of my open-minded friends about the idea that Tarzan could be hot, and asked them to weigh in on the debate. Here's what some of them said:

"I was into skateboarding growing up so that made Tarzan extra attractive. Love a guy that's good with animals and doesn't submit to modern technology." — Monica, 23

"Out of all the Disney hunks, I don't really think Tarzan does it for me. But maybe that's because I'm not really into the animalistic masculinity thing." — Kristin, 22

"I think he looks like a 1997 Mel Gibson mixed with Bradley Cooper with long hair. His weird knuckles freaked me out. Other than that I guess he was hot for an animated character. He grunted a lot. Like Tom Hardy in Mad Max. Except now I feel like a perv because he's an animated character." — Chelsey, 24

So whether you're into muscle-y dudes or not, let's just all admit that Tarzan was supposed to be hot — and that it's perfectly okay if you thought that the kiss between Jane and Tarzan was totally steamy. After all, there's a reason why Skarsgard was picked to play him.