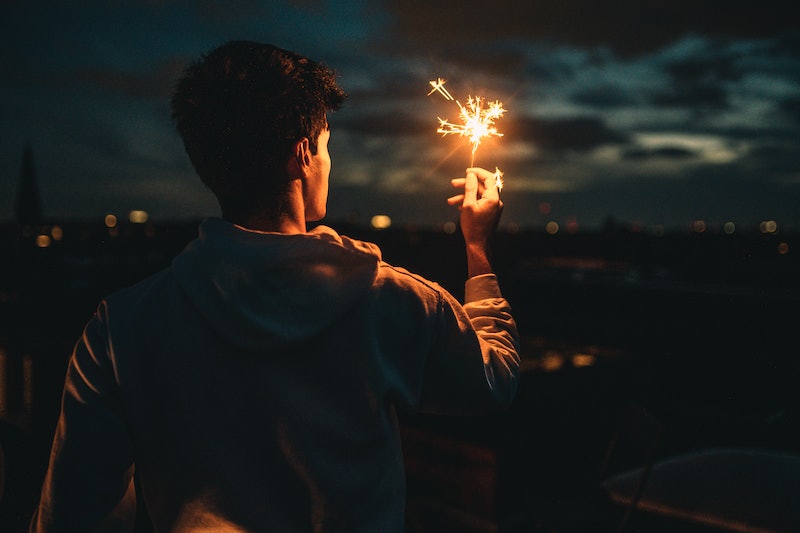 With the Fourth of July coming up, it's always good to brush up on some Fourth of July facts that'll help you understand why we celebrate the day every year, and truly appreciate how the day came to be. You might know July 4th best as Independence Day — but no matter what you call it, it's definitely an important day in history. It's been a paid federal holiday since 1941, but celebrations of the day have been recorded to go back as far as the 18th century. These days, you probably celebrate by eating a bunch of hot dogs and hamburgers, grabbing a cold beer from the cooler, and watching the neighborhood fireworks display with your friends.

Back in the day, a few colonists expressed interest in independence from Great Britain, and as time passed, more and more seemed to adopt a similar attitude. Literature such as "Common Sense," a pamphlet written up by Thomas Paine back in 1776, helped challenge Great Britain's authority, and was a big hit with those who were getting tired of Britain. The quest for independence was brought up in Congress, and a committee, which included notable men like John Adams, Thomas Jefferson, and Ben Franklin, was created to help draft a statement that made this break with Great Britain justifiable. On July 4th, Congress decided to accept this statement, which was otherwise known as the Declaration of Independence. The celebration, which commemorated the break from Great Britain's monarchy, continued on a yearly basis from there. As a holiday, it celebrates both independence and unity as a country.

Here are a few other interesting facts about the holiday that'll be interesting to think about as you and your friends top your burgers and enjoy the fireworks display.

1. Thomas Jefferson is credited for writing most of the Declaration of Independence.

While there were five men on the committee, Thomas Jefferson was chosen to do a majority of the writing. "I consented; I drew it; but before I reported it to the committee I communicated it separately to Dr. Franklin and Mr. Adams requesting their corrections," Jefferson allegedly wrote in 1823. While it's typically seen as a collective effort, Jefferson's heavy contributions were eventually acknowledged in the 1790s.

2. Jefferson used a "laptop" to write the Declaration of Independence.

Of course, not the kind of laptop we use today — Jefferson's was also occasionally referred to as a "lap desk," a "laptop desk," or a "writing box." This desk was made out of mahogany by a Philadelphia cabinetmaker named Benjamin Randolph, who Jefferson was friends with. Inside the desk was a drawer, meant to stash paper and writing utensils. In 1880, he had a desk replicated to be given as a gift to Joseph Coolidge, Jr. Coolidge was well aware of how significant such a present was.

3. There were multiple copies of the Declaration of Independence.

Jefferson and his crew made copies at a shop run by John Dunlap, a Philadelphia printer. These copies became known as "Dunlap Broadsides," and it's estimated that around 200 were printed for distribution. Today, only 26 copies have survived throughout the years, with the most recent copy discovered somewhat recently, in 2009.

4. John Adams was ticked off that the celebrations happened on July 4th.

Technically, Independence Day is on July 2nd, as that's the day when Congress voted for Independence. July 4th was when the Declaration of Independence was officially adopted. On July 3rd, Adams wrote a letter to his wife Abigail, stating that "The Second Day of July 1776, will be the most memorable Epocha, in the History of America." In a weird way, it might have been like John Adams knew something, because...

5. Both John Adams and Thomas Jefferson died on July 4th.

The same year, as well — 1826. Jefferson and Adams died within five hours of each other. Even creepier, Adams was credited with having the last words of "Thomas Jefferson still survives," unaware at the time that he had passed away moments earlier. Jefferson was 83, and Adams was 90. James Monroe also passed on this day years later, in 1831. In more uplifting news, Calvin Coolidge was born on July 4th in 1872.

6. July 4th is currently known as being the biggest hot dog holiday.

Let's move past presidents and focus on the food. It's no surprise that summer is a big time for hot dogs. In 2013, the National Sausage and Hot Dog Council estimated that Americans would be consuming 150 million hot dogs to celebrate the day. That's a lot of hot dogs.

7. Back in the day, Americans ate turtle soup to celebrate.

While John Adams likely celebrated on July 4th begrudgingly, he was rumored to celebrate with a meal that focused around turtle soup. While turtle soup isn't really popular these days, it was once seen as a summertime delicacy. Turtle soup was especially well known in the New England area, so it wasn't necessarily Adams who made it popular. Eventually it was replaced with roasted pig, which is probably why the tradition today is to host cookouts.

8. July 4th is seen as a day of celebration for other countries, as well.

Rwanda and the Philippines also have celebrations, but for other reasons. For those in Rwanda, July 4th marks the day when the Rwanda Genocide ended back in 1994, bringing peace to the country. Their day is known as Liberation Day. For the Philippines, July 4th was marked as the day where the country won independence from colonial control in the United States back in 1946. While the date eventually moved to June 12th, when the Philippines became independent from Spain, there's still a celebration (kind of, as it's not hugely celebrated) on the 4th for "Philippine Republic Day," also known as "Filipino-American Friendship Day."

More like this
11 Podcasts About The History Of Juneteenth
By Emma Carey
13 Summer Solstice Quotes To Celebrate The Longest Day Of The Year
By Sadie Trombetta
The Summer Solstice Spiritual Meaning, Explained
By Jessica Booth and Brittany Beringer
18 Father's Day Poems That'll Make You & Your Dad Tear Up
By Michelle Regalado and Siena Gagliano
Get Even More From Bustle — Sign Up For The Newsletter