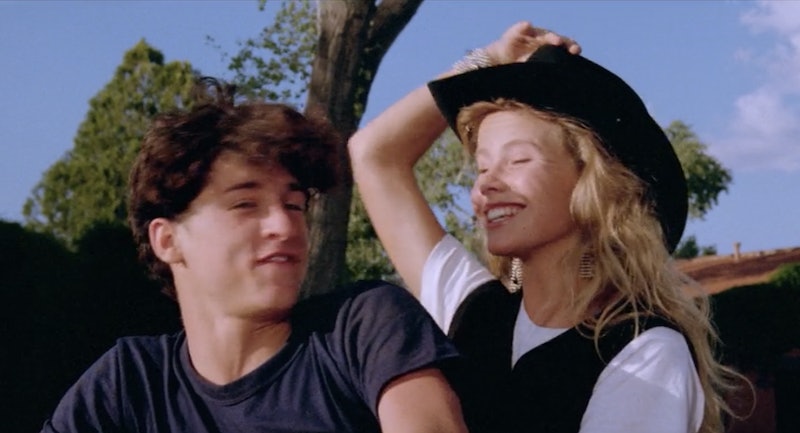 If your head is still spinning from the acrobatics and poodle hair in Girls Just Wanna Have Fun, you need to brace yourself for the second craziest ‘80s film named after a song, Can’t Buy Me Love . It’s your classic story of pretend affections becoming real affections, peppered with future TV stars (this time we’re trading in Sarah Jessica Parker for Patrick Dempsey, hell yeah) and more bad perms than ever before. So, naturally, if you haven't already watched it, then you need to watch it now.

But let’s recap the plot before we launch into it officially. When head cheerleader Cindy ruins her mother’s suede ensemble, she’s forced to accept the offer of nerdy lawn boy Ronald: he’ll buy her a replacement outfit if she pretends to be his girlfriend for a month. They bond, but, as their non-relationship progresses, it leverages Ronald into insane levels of popularity... and subsequently douchey teen arrogance. Ronald revels in his school takeover while Cindy laments the Frankenstein creation she birthed. But this can’t last forever, can it? (It doesn’t).

In any case, prepare to be mystified by the onslaught of follicle weirdness in Can’t Buy Me Love... oh, and slew of other ridiculous things.

1. These Three Look Like They Waged A War On Some Hair Products And Lost

Although, to be fair, I don't think anyone ever wins a battle against a crimping iron.

2. Cindy Has A Cardboard Cut-Out Of Her Boyfriend On Her Door

Which just screams "healthy relationship" to me.

3. The Fact That It Took Me Five Minutes To Realize This Is A Beret And Not Just His Hair

Also, the fact that he's wearing a beret.

But, seriously, what's the point of the tic tac toe thing?

5. Cindy's Mom's Date Hits On Cindy, And She's Loving It

"LOL how sweet of you to hit on my underage daughter like that."

7. This Is Cindy's Mom's Infamous Suede Outfit, So, To Be Clear, Cindy's Mom Is All About Wearing White Bikini Tops In Public

8. Weirdly Enough She Turns Up To Class In Her Most-Popular-Girl-At-School Zoot Suit

There's just like a melange of confusing things here.

9. Cindy's Just Going To Ruin Everyone's Clothes In A Violent Rampage, Isn't She?

What did that shirt ever do to you?

10. This Entire Movie Shows McDreamy Distancing Himself From The Children Of The Corn Kid

Which, to be honest, seems like a good move.

11. The Shirtless Aproned Guy In The Back

12. No Snark, Just A Lot Of Bewildering Face Paint And Product Placement Here

13. Cindy Tries To Win Ronald Over By Making Him Read Her Awful Poetry

Pictured: the appropriate facial reaction to that.

14. The Audacity Of Ronald To Publicly Break Up With Cindy Wearing The Sunglasses She Bought Him With Her Mom's Credit Card, Tho

And this is why they're not my favorite '80s teen movie couple.

15. Every Ounce Of This Makes Me Brain Hurt

What do you even call that pattern?

16. This Looks Like A Very Unconventional Way To Mosh

17. "I Happen To Know That In The Whole School There's Only One Other Titty Quite This Pretty"

18. Wearing Sunglasses In A Darkened Room

He has reached peak douche.

20. Cindy's Hair Gets Progressively Better The Worse Her Life Gets

It's like the harsh realities of her meaningless existence just gives it a nice subtle wave, you know?

20. When Ronald Seduces Some Rando With Cindy's Awful Poetry

And it works. How, how on Earth, why doesn't anyone seduce anyone like a normal person in this school?

21. Obligatory Teen Party Meltdown That Reveals The Truth About The Sham Two Main Protagonists Are Trying To Maintain

But, see, her hair looks fantastic.

22. That Totally Romantic, Not Creepy Part Of The Film Where Ronald Follows Cindy Into The Girl's Bathroom

Not at all weird, not at all concerning.

23. Obligatory Slow Clap After The Teen Movie Protagonist Makes A Dramatic Speech In Front Of The Whole School About How He Done Effed Up And We Should All Just Be Ourselves

Honestly, I just love how fresh this story is.

24. When Cindy Decides To Leave With Ronald And Her Friends Cheer Her On As She Goes For The Guy They Previously Hated, Then Hooked Up With, Then Went Back To Hating, Then Decided To Low-Key Respect

This was indeed a very eventful school year for all.

So, again, if you haven't watched this movie yet... what are you waiting for?