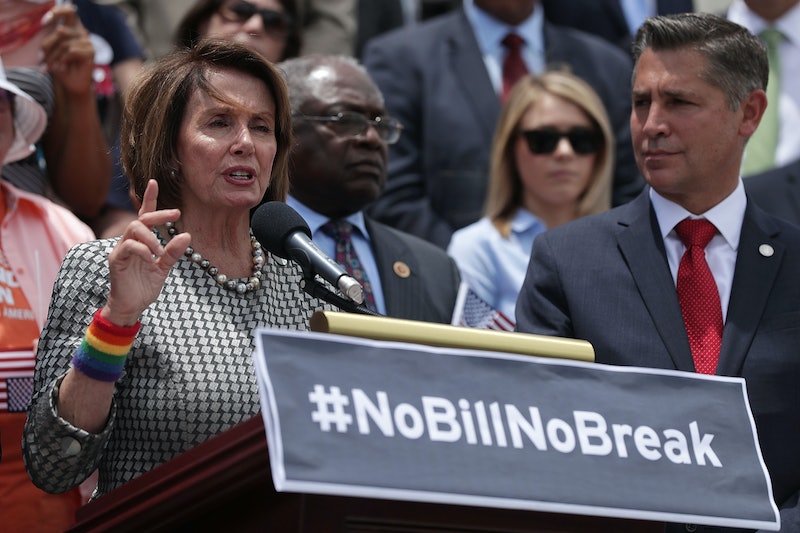 On Wednesday, about 40 representatives literally took to the floor of the House, staging a sit-in led by Rep. John Lewis. The sitters are protesting Republican refusal to vote on gun legislation proposals that would expand background checks and prevent people on the No Fly list from purchasing firearms. Hours into the protest, at least 19 senators joined representatives in sit-in solidarity. Democrats in both houses of Congress have been frustrated and outraged by the failure to pass gun legislation in recent weeks, and their shared ire showed on the House floor Wednesday.

The Democrats from the House and Senate sitting in hope that their joint numbers will pressure Republican lawmakers in both houses to move forward on gun legislation. The protest comes just days after Sen. Chris Murphy led a 15-hour-long talking filibuster in the Senate to try to pressure his fellow senators on each side of the aisle to arrive at a consensus on similar pieces of legislation before they voted Monday. Another vote on a piece of legislation barring people on the No Fly list from purchasing guns is expected to take place on Thursday.

The House protest began one day after Republicans refused to recognize Rep. James Clyburn on the floor of the House, as he attempted to introduce background check and "No Fly, No Buy" bills. Fresh off Monday's disappointing failure to move forward in the Senate and hopeful for progress to come, nearly half of Democratic senators took the opportunity to join their frustrated House counterparts to make the sit-in a cross-house protest.

Specifically, the protest, trending under #NoBillNoBreak, is pushing Congress to skip its normal July 4 recess in order to debate and vote on the gun bills being put forth. Whereas the Senate has at least seen debate and voting in the wake of the Orlando mass shooting, the House has been more stagnant.

Lewis and his fellow protesters from the House and Senate think that movement on gun legislation is long-overdue. And so, in solidarity, they sit.