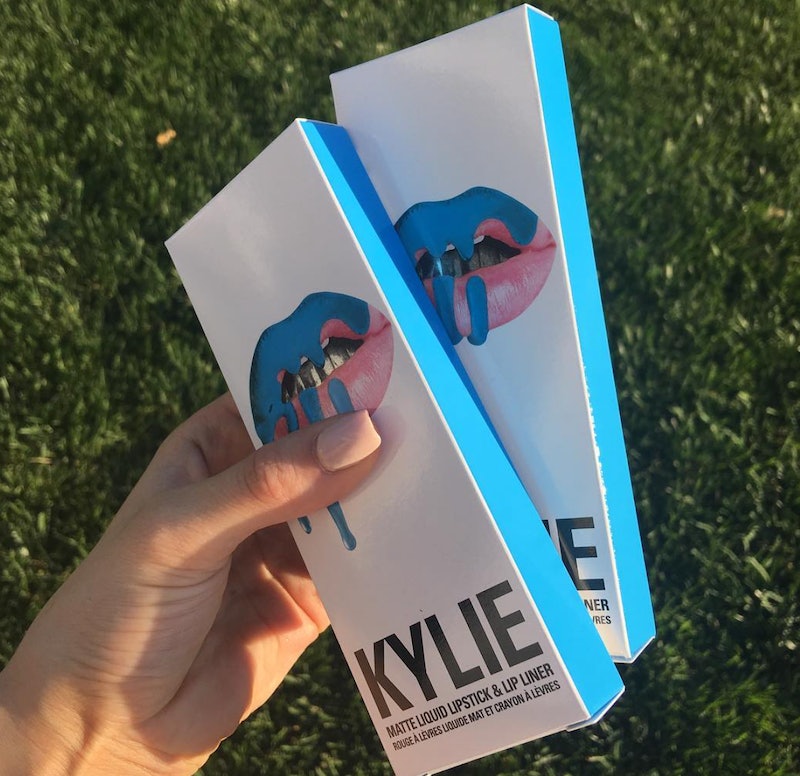 Kylie Jenner keeps expanding the Kylie Cosmetics empire with new colors and textures for her highly sought-after lip products. The lip queen has also been quite adventurous, with her recent black Dead of Knight Lip Kit and her KyMajesty Metal Matte, which offers blue x black x metallic sheen. The same can be said for Skylie and Freedom, the two blue Kylie Lip Kits that drop on Friday, June 24. The brand previously noted that Dead of Knight and KyMajesy won't be available again for "a while" and referred to Skylie and Freedom as "exclusive" and "limited edition" Lip Kits in social media teaser posts about the shades. Up until now, all Lip Kit shades seemed to be permanent additions to the line. Bustle reached out to Kylie Cosmetics to inquire about the official status of the blue Lip Kits and we just got the official word.

In an email to Bustle, Kylie Cosmetics wrote, "Yes, Skylie and Freedom are both limited edition! Thank you for your inquiry!" So there you have it straight from the source. These shades are not being added to the permanent product line. At least not for now.

It's understandable, though. The blue Kylie Lip Kits are not "everyday wear" shades. You probably can't get away with wearing them if you work in an office or an environment with a dress code.

Even so, Skylie, which is a baby blue, and Freedom, which is a denim-like navy, are suitable for holiday celebrations, parties, clubs, and other summery activities. They are unique. Not everyone can pull these off or wear them for any occasion. But if you like a daring and different lip look, go for it.

While Freedom is a limited edition shade, you never know when Jenner and hear team might decide to bring it back for a short-term run in the future. It may even be included in restocks here and there.

Skylie was originally labeled as "exclusive," which caused me to question how long it would be available. Now we know, thanks to the team.

Both of the Kylie Cosmetics black shades are going away for "a while," per the Instagram posts, suggesting they are limited edition, will come back randomly, and won't be available with every restock.

Kylie Jenner always keeps us guessing, from the shades to the statuses of her KLKs.