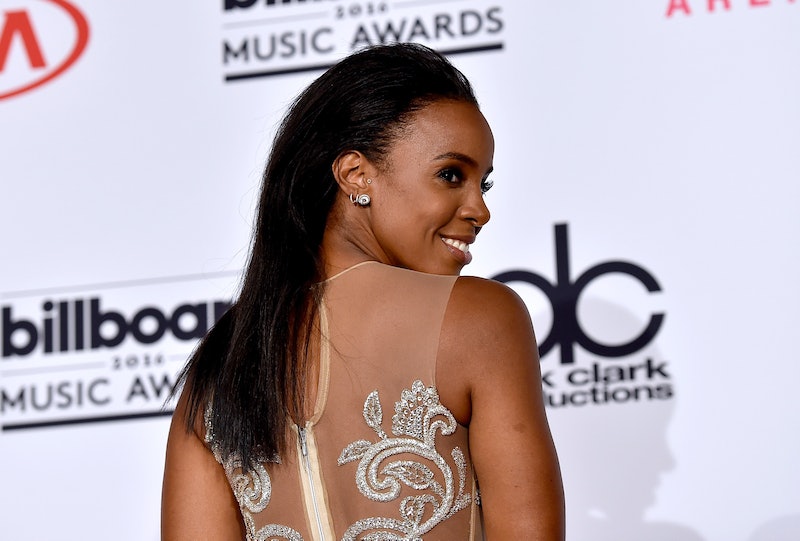 Beyoncé isn't the only former member of Destiny's Child expanding her empire into other lifestyle realms, like she did with her Ivy Park athleisure line. Bey's former bandmate and BFF Kelly Rowland is launching a makeup line designed for darker skin tones. K. Rowl usually looks amazeballs, with killer lashes, flawless skin, and majorly glossed lips. Whatever style she rocks, the singer is always pulled together and is a well-executed mix of sexy and chic. I expect that aesthetic to inform her makeup collection. So what's the deal with Kelly Rowland's makeup line? What products will it include? Well, Rowland just dropped a huge hint and it has everything to do with the eyes.

In a recent interview, Rowland tells Bustle, "Well, we're starting with lashes, which we're really excited about. And we're getting into the whole nitty gritty of the line right now and breaking everything down and exactly what we want. We want our first products to be out. Yeah, we're very excited."

OMG, you guys! That's a monster clue right there. They are starting with lashes, which are always a fun feature to play up, be it with falsies, volumizing/thickening/darkening/curling mascaras, or with extensions! While Rowland didn't clarify what, exactly, they are doing as they "start" with lashes, it's enough of a hint to get us excited over here.

Rowland's lashes are always on fleek and fluttery. She could be doing a false lash range or a variety of mascaras that address all lash needs and wants.

Overall, it sounds like things are still in the planning and development stages, which is totally fine. Rowland shouldn't rush getting makeup to market until it's totally ready. Ashley Tisdale took her sweet time creating her Illuminate range with BH Cosmetics and the end result is quality control.

I am thinking fans and makeup lovers will so be able to copy Rowland's glam style with her forthcoming makeup line. Lashes are totally the right place to start.