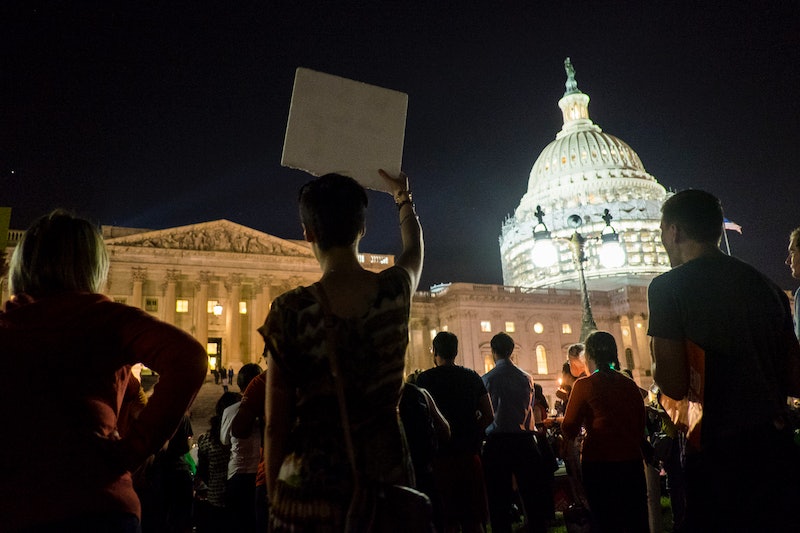 As House Democrats continue their gun control sit-in overnight and into a new day on Thursday, a phrase in their proposed measures has risen to the surface: “no fly, no buy.” Raised earlier this week by a group of bipartisan senators before the sit-in began, the phrase refers to measures that would block gun sales to any individual the government suspects of terrorism and has thus placed on the federal “no-fly” list.

The proposal was a direct response to the four failed Senate measures from last week that Democrats tried to push through in the wake of the massacre at Orlando LBGT nightclub Pulse, in which the shooter used a semi-automatic assault weapon to kill 49 people.

Republican Sen. Susan Collins of Maine and Democratic senator Heidi Heitkamp of North Dakota led the push for a “no fly, no buy” policy. Federal terrorism “no-fly” lists and “selectee” lists, which entail more rigorous security checks for those on it, currently comprise more than 100,000 people. However, fewer than 3,000 of those are American citizens. In a direct response to the circumstances that led the Orlando shooter to gain legal access to his weapons, the proposed measures would also mandate that both local and federal authorities be notified if anyone on either of these lists attempted to purchase a gun.

“This list has been faulted for producing a high error rate in the past,” said Rep. John Carter (R-Texas). “I cannot support a standard that is so inherently subjective, especially when it is used to deny a constitutional right.”

The NRA had also expressed their concerns that banning individuals on terrorism watch lists from purchasing guns was downright un-American, as there could be lots of innocent people on those lists and those innocent people should not be deprived of the semi-automatics that are their birthright.

The measure may be dead for the time being, but it's highly unlikely this is the last time we'll hear about "no fly, no buy." It's been decades since any real changes were made to gun control measures, despite commercial weapons becoming more and more readily available, and prohibiting those whom the federal government believes to have ties to terrorism is one of the most logical places to start - as evidenced by the bipartisan nature of this iteration of "no fly, no buy," even some Republicans can get on board with that.