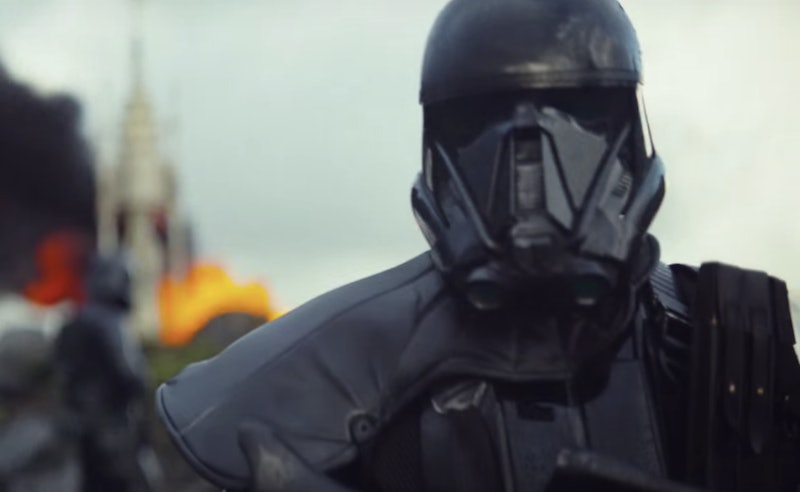 With 2016 already halfway out the door, it's time for Star Wars fans to start gearing up to explore yet another part of the galaxy. Rogue One: A Star Wars Story, set to hit theaters this December, follows Jyn Erso (Felicity Jones) and the rest of the Rebellion as they fight to retrieve the plans for the creation Darth Vader's Death Star. However, with the film's separate plot not involving the main characters of Star Wars: Episode VII — The Force Awakens, a slew of fan theories have been created to try and connect Jyn to the likes of characters such as Luke Skywalker, Obi-Wan Kenobi, or, our most recent addition, Rey. And now — thanks to Entertainment Weekly releasing their exclusive Rogue One photos — it seems one specific image could have the answer. That's right: Rogue One may be connected to Star Wars — The Force Awakens after all.

One of the things Rogue One brings to the table is a brand-new type of soldier. Aside from the ever-popular Stormtroopers, dark-suited soldiers known as Deathtroopers now storm the battlefield as well. The Deathtroopers — which first appeared in the promo for Rogue One — are specifically directed to destroy the rebellion, as opposed to the Stormtroopers' main focus of obeying Darth Vader as a direct army. However, in one photo of them that has been released, the two soldiers collide. The still shows a Deathtrooper holding what appears to be a small, action figure version of a Stormtrooper. This means two things: One, yes, that is going to be the toy that everyone is going to want for Christmas, and two, that toy soldiers exist in the galaxy far, far away as well. Take a look at the image for yourself.

But here's the catch. This is actually not the first time that we've seen such a figure in the Star Wars films. The last time we saw someone in Star Wars holding a doll was Rey in The Force Awakens. And while, yes, it wasn't a Stormtrooper and it was something that Rey made for herself, there could be a connection in there somewhere. Perhaps Rey had a doll as a kid and it was this one? It could have been passed down from her relatives and then taken from her along with her family — leaving Rey to use her own means to create the doll we saw her with last. And, if that's the case, Rey could in fact be a relative of the Dark Side.

Unless, of course, it's not actually an assigned Deathtrooper under that suit.

Now, on the opposite side of things, my mind also wandered to the possibility that this could be some kind of sick, twisted war tactic. For example, the Deathtroopers could be controlling the Stormtroopers in some kind of voodoo doll way. I mean, it is a little bit weird that out of all people it's a Deathtrooper holding one of those? But, then again, that could be thinking a little too far outside of the box. And, well, just look at Rey's doll from The Force Awakens.

Meanwhile, when it comes to the connection with Rey, I'm not the only one bringing this up. In fact, EW themselves pointed out the subtle connection in their exclusive look in saying, "The filmmakers didn't want to explain exactly what's happening here, but they confirm: yes, that's a Stormtrooper doll, a galactic version of a toy soldier. And it will have special significance in the story. (Decades later, an abandoned girl name Rey will also fashion a doll for herself — this one an X-wing pilot.)"

Yep, that sure sounds like one major hint to me. And, well, now my full theory is starting to make too much sense. All I'm saying is that I'm pretty sure that doll means something. And I'm going to find out what it is.