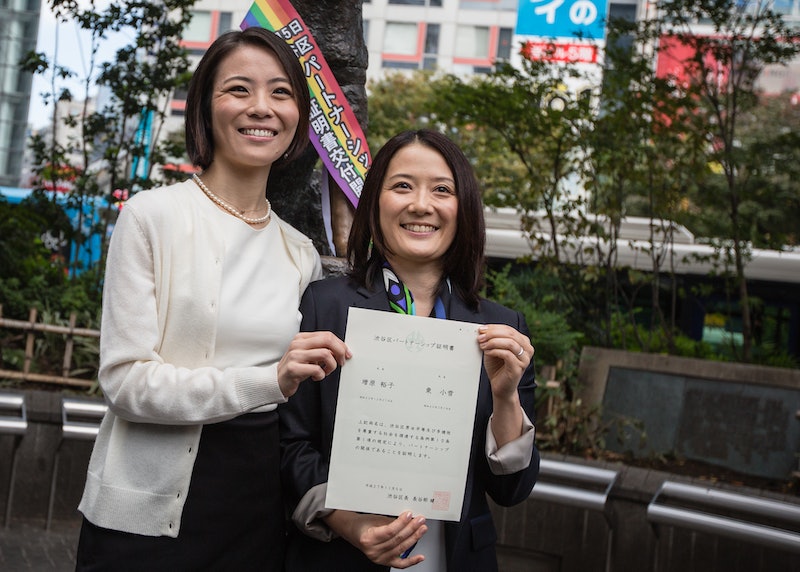 We're coming up on the one-year anniversary of Obergefell v. Hodges, the landmark Supreme Court case that established the right of same gender couples to marry. In the time since, same gender marriage rates have skyrocketed in the United States. With Pride celebrations happening all over the country this month, it's easy for some observers to say that LGBQT rights are all sewn up. The fact of the matter is, though, that the Supreme Court ruling addressed only one small aspect of a very complicated civil rights picture. And while some may have championed marriage equality as the cause célèbre of the LGBQT rights movement, there are a whole lot of other issues that some of us feel are more pressing.

We cannot talk about threats to LGBQT equality without addressing the obvious elephant in the room. When a shooter walked into Pulse on Latin Night and opened fire in a club filled primarily with LGBQT people of color celebrating Latinx culture, killing 49 people and wounding over 50 others, it was a stark reminder of the fact that being LGBQT is extremely dangerous in America. In the ensuing days, we've learned much more about the killer, and his motivations have come to be a subject of complicated discussion — internalized homophobia may have been a factor, for example.

One thing is certain, though: A shooter looking for a target turned to a club he knew would be filled with LGBQT people of color.

Across the country, states and municipalities are passing "bathroom bills" that transparently target transgender women. These bills assert that people should be required to use the bathrooms most closely aligned with their sex assigned at birth — and they're causing real damage as, for example, people call for bounties on trans people found in the "wrong" bathroom. Even in states without bathroom bills, using gendered restrooms is incredibly dangerous for trans people, with over 70 percent reporting harassment and assault in bathrooms.

Before North Carolina passed its infamous bathroom bill, other states including Texas, Arizona, Nevada, and Wisconsin had attempted similar legislation. The National Center for Transgender Equality is tracking a surge in such laws, a reminder that in most states, transgender people are not considered a protected class with respect to discrimination.

The people who dominate the cultural narrative about what LGBQT rights look like (who are often middle class, white, gay men) enjoy a large number of privileges, and one of them is wealth. Many people may think of the LGBQ community as monied (though most at least acknowledge that transgender people struggle with poverty) — but the facts are more stark, with the poverty rate for LGBQT people actually much higher than that of heterosexual people. A big part of the reason why revolves around treatment in the workplace, where the lack of treatment of LGBQT people as a protected class means that the nearly half of LGBQ people and 90 percent of trans people who are harassed at work have limited recourse.

Nearly a quarter of lesbian and bi women are poor. LGBQ couples of color are three times more likely to experience poverty than white LGBQ couples. Kids growing up in LGBQT households are twice as likely to be poor than their counterparts in heterosexual homes, and transgender people are four times as likely to make less than $10,000 a year, a number that gets even more extreme for people of color, especially trans women. After transition, trans women make 32 percent less than they did before. While trans men make 1.5 percent more than they did prior to transition; given that they started out with a wage imbalance, they still make less than their cis colleagues.

Among LGBQT youth, homelessness rates are shocking. Forty percent of homeless youth who reach out for support identify as LGBQT. Forty-three percent of drop-in center clients are LGBQT, while 30 percent of people relying on housing assistance are also members of the LGBQT community. Poverty is a huge contributing factor here, as is discrimination — LGBQT youth are thrown out of their homes for being who they are, while landlords can and do refuse to rent to LGBQT people in states where they have no protections.

For trans people, this problem is exacerbated by another issue: Many shelters are not trans-friendly, or safe for trans people to be in. Transgender women face routine discrimination when they seek sheltering services, and may be turned away or housed with men. In addition to being dehumanizing and humiliating, this is extremely dangerous — forcing transgender women to shelter with men if they want services radically increases the risk of harassment and assault.

Twenty-five percent of transgender youth have attempted suicide, and statistics estimate that LGBQ youth are between two and four times as likely to attempt suicide than their straight peers. Those who come from "rejecting families" are much more likely to consider killing themselves — a particularly stark example of the danger of hostile families came to international attention in the case of Leelah Alcorn, a transgender teen who captured international attention at the time of her death.

This isn't just a youth problem, though. Suicide is pervasive among LGBQT adults as well, and thanks to lack of comprehensive studies, we don't even know precisely how prevalent it is. We do know that issues like discrimination, poverty, and feelings of hopelessness radically exacerbate the risk of suicide, and these are all problems the adult LGBQT community faces.

LGBQT people are more likely to experience poor health outcomes, especially if they sit at the intersection of two or more identities. Poverty can make it hard to access health care, while discriminatory practices in the workplace present challenges for people seeking employer-covered health insurance. At the doctor's office itself, many staffers lack cultural competency, which makes it difficult for LGBQT patients to feel safe and comfortable when discussing medical issues — men who have sex with men are routinely reminded that people who run national blood banks think their blood is poisonous, for example. LGBQT people tend to delay seeking health care, are slow to fill and manage prescriptions, and are more likely to seek ER treatment.

Additionally, members of the LGBQT community are more likely to struggle with psychological issues, STIs, and cancer, among many other things. These issues get even worse for elders, people of color, disabled LGBQT people, and other subsets of the community.

Eighty-two percent of LGBQT youth report being bullied, with two-thirds reporting that they feel unsafe because of their orientation; meanwhile nearly half reported feeling unsafe because of their gender. One-third stayed home from school on one or more occasions because they feared for their safety. When it comes to hate crimes, the latest statistics indicate that LGBQT people are more likely to be targeted than any other social group.

LGBTQ people are also frequently sexually assaulted. Sixty-four percent of transgender people have been sexually assaulted. And though lack of complete record-keeping makes it hard to pin down exact sexual assault statistics for LGBQ people, we do know that roughly half of bisexual women report having experienced sexual assault in their lifetime, as have gay and bi men. At least one in eight lesbians experiences rape — this includes "corrective rape" (like that a Tennessee judge once advocated for, illustrating an ugly collision of homophobia and rape culture).