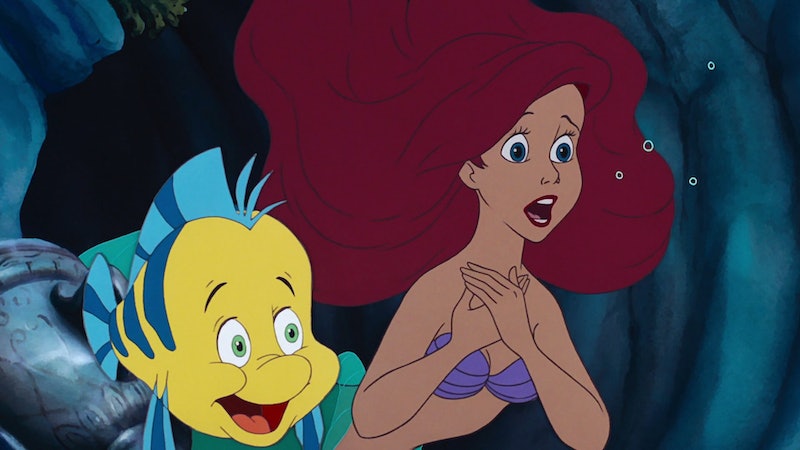 Pack rats of the world, rejoice, for now is our moment in the sun! Apparently your old Disney VHS tapes are worth a lot of money now. In fact, they could be worth as much as $10,000. Wrap that number around your head for a second. That's like 1,000 Chipotle burritos, you guys. Your baby self could have accidentally set up your adult self to be living your best life.

To explain, E! News recently found a copy of The Little Mermaid from 1990 for sale on eBay for $9,999. (OK, so 999 Chipotle burritos and a side order of chips and guac.) The seller justifies the astronomical price because the cover is among the rare first editions that has what some people considered a phallic design in the image of the castle, which was quickly swapped out for another in the next release. But this isn't the only high stakes Disney VHS up for grabs — there is also a Beauty and the Beast from 1992 selling for $9,999. So if you happen to have and want to sell both of those, then YIKES, you might just have earned yourself a down payment on a house!! (JK, this is 2016. You earned yourself like eight seconds of rent money. But STILL.)

Adding somewhat to the value of this, Redditor Reddit_Executive points out, is that they are Disney "Black Diamond Classic" editions. "On the spines of some VHS (and BetaMax) tapes is a black diamond with Walt's signature on it," Reddit_Executive explained. "This was Disney's first attempt to market their videos to homes. Because of this, certain Disney collectors are convinced that these VHS tapes are worth something."

It should be noted, of course, that these haven't sold — but the mere idea that they may be worth that much is certainly appealing for anyone whose parents didn't toss their old videos out. (Shout out to my own mother, who has been harboring 100+ VHS tapes in our basement for many, many moons.) And while you're checking your childhood bedroom to see if you left any of these gems behind, make sure you check out the publishing dates on your old Harry Potter books, because some early edition Harry Potter books are worth hella money now.

Basically, the lesson here is that it pays to be overly-nostalgic and hoard all of your personal belongings for several decades. Take note, Gen Z! Someday your Kylie Lip Kits will make you millions.