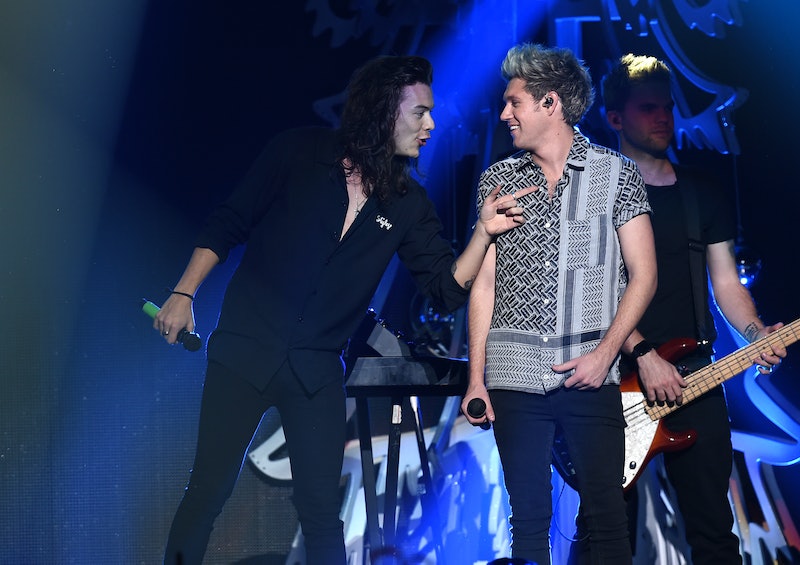 One Direction fans may be wondering why there's been a distinct lack of reaction on Twitter to some important news today: Niall Horan’s reaction to Harry Styles' reported solo career is still TBD (as is the reaction from the rest of the One Direction boys — so far it's radio silence with regards to Harry Styles). On one hand, this may encourage us to hope that Harry Styles' official solo artist contract is temporary — perhaps the band is waiting to make an official statement about an extension of the temporary hiatus that began last year. Alternatively, this may have something to do with there being not one, but two heartbreaking splits announced today.

In the European political sphere, after a dramatically close Brexit referendum result in the United Kingdom (approximately 48 percent voted that the United Kingdom should remain in the European Union, approximately 52 percent voted to leave), it looks like the UK will be exiting the European Union. Thus far, Horan has dedicated five tweets and two retweets to reacting to Brexit and a grand total of zero tweets to reacting to the news of Harry Styles' solo career. Honestly? Good for Horan. While Styles' departure from the band is shocking and sad (and while it's certainly the first priority for many die-hard 1D fans), it's not exactly as urgent as the UK exiting a union that it's arguably been a part of (the politics here is kind of complicated) for forty-three years. Here's Horan's reaction to this shocking news:

He's succinct and to the point, but given Horan's astonishing social media reach, with a massive 25.5 million followers, his reminder to his fans to vote could have potentially affected hundreds, if not thousands, of people and encouraged them to get out to the polling stations. Given Horan's politics (he's clearly pro-remain), this was a savvy move. Results have shown that voters between 18-24 were the most pro-remain group, a demographic that you could argue Horan and One Direction in general appeals to.

Horan's second point, that voters would regret their decisions, is sad but could potentially true. The pound plummeted Friday to its lowest level since 1985, according to the New York Times. While a dramatic decision which entails so much instability would presumably always have a similarly dampening effect on a country's economy, Mark Carney, the governor of the Bank of England has warned against the negative effects of a brexit on the economy, according to the Telegraph, while President Barack Obama has argued it could take up to ten years for the UK to strike a trade deal with America when positioned outside of the EU, according to the Guardian.

And with all these potential factors, it's easy to see why Horan continued to use his platform to speak out even more about the vote, making claims about Nigel Farage, aka the leader of the UK Independence Party (the one with the toughest stance on immigration and who are predictably delighted by the Brexit results).

I'm assuming this tweet is in reaction to this fairly incendiary video, accusing the Remain camp of spreading lies.

And it's no wonder Horan's so angry. Farage's accusations about lies were particularly difficult for some people to stomach because the Leave campaign had formerly put advertisements on the sides of busses promising that Brexit would mean 350 million euros a week extra for the NHS, the UK's free national healthcare service. However, Farage retracted this claim on ITV's Good Morning Britain — Horan's response seems to echo the pro-Remain public's response on this thorny issue. And he wasn't done:

Whatever your politics are and whether or not you're invested in British politics, I think we can all agree that politicians making claims or promises that they then retract after a referendum or election undermines democracy. And I'm just glad that this is how Horan is using his voice right now.

Even if you weren't sure what Brexit was until June 24, I think we can all agree that Horan has used his celebrity for good and to teach some fans something new. He is passionate about politics and invested in how it affects his country. So, however you feel about the Harry Styles news or the UK exiting the European Union, that's at least one ray of sunshine for today.

More like this
Eurovision 2023 *Might* Be Held In The UK
By Sam Ramsden and Rachel Mantock
Supreme Court Overturns Roe v. Wade
By Melanie Mignucci
How To Fight For Reproductive Rights, Based On How Much Time You Have
By Courtney Young
Boris Johnson’s Leadership Is In Question – Again
By Bustle UK
Get Even More From Bustle — Sign Up For The Newsletter