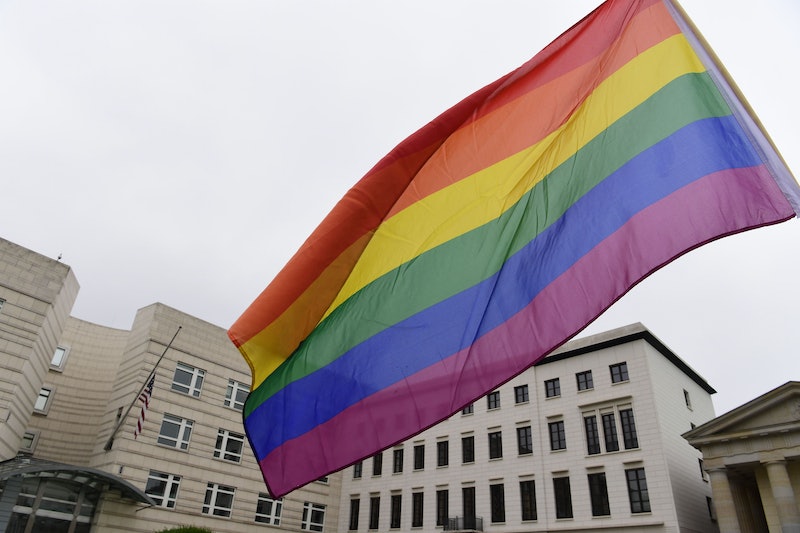 Beauty pageants aren't exactly known for being bastions of progressive thought. No matter how much emphasis is placed on the talent and interview portions, pageants still involve judging genetically-blessed women for how sculpted their genetically-blessed abs look in a bikini with stilettos on their genetically-blessed feet — not necessarily the most feminist of activities. But that's why the first openly gay Miss Missouri, Erin O'Flaherty matters: It's an indication that LGBTQ people are starting to see acceptance even in unexpected places, rather than just on the forward-thinking fringes of society.

O'Flaherty, a 23-year-old clothing store owner born in South Carolina, made national headlines this week after being crowned Miss Missouri on Saturday night. In an interview with Cosmpolitan, she noted that she struggled with her sexuality as a teenager, at least partly because she felt like she didn't fit her own mental image of a gay woman. "Knowing I might be gay but also being very feminine was kind of confusing for me... It took many years of struggle to figure out who I was," she said.

With the LGBTQ community still reeling in the wake of the Orlando Pulse shooting this month, the results of a pageant may not seem like much to celebrate. However, O'Flaherty's win reflects changing attitudes toward LGBTQ people across the nation. As the Huffington Post points out, a variety of beauty pageants around the world specifically celebrate LGBTQ people (Miss International Queen comes to mind), but Miss Missouri is a mainstream pageant. As such, it's rooted in conservative values; beauty pageants aren't necessarily political by nature, but they do tend to reinforce traditional gender norms and beauty standards. The fact that an openly gay woman took part in a competition of femininity and won would been unimaginable just a decade ago.

And another important point: O'Flaherty could also be a role model for young women struggling with their identity today. Although media representation has certainly improved in recent years, femininity is often conflated with heterosexuality — an association that simply isn't true. No matter your personal feelings on pageants, O'Flaherty's win shatters stereotypes surrounding gay women, and her press tour could help a teenager in, say, Missouri realize it's possible to be LGBTQ outside the narrow confines of what a gay woman is "supposed" to look or act like.

Finally, O'Flaherty's crown provides her with a platform to reach parts of the United States that may not typically interact with LGBTQ people. Although she told the AP that her focus will be on a variety of issues in her time as Miss Missouri, she hasn't shied away from talking about her sexuality, and on Good Morning America, she said she was "excited to represent the LGBT community." Her platform even focuses on an issue important to the LGBTQ community: suicide prevention. LGBTQ people, particularly those who are bisexual or transgender, continue to suffer from suicide rates far higher than the rest of the population, which is something that O'Flaherty has noted in interviews.

O'Flaherty isn't the first mainstream LGBTQ beauty pageant contestant in history; Analouisa Valencia was openly gay when she competed for Miss South Carolina in 2013, and it's likely that women who may not have been out have competed in the 95 years since Miss America was created. However, O'Flaherty's win is a win for the whole LGBTQ community — and it's about time we had one.