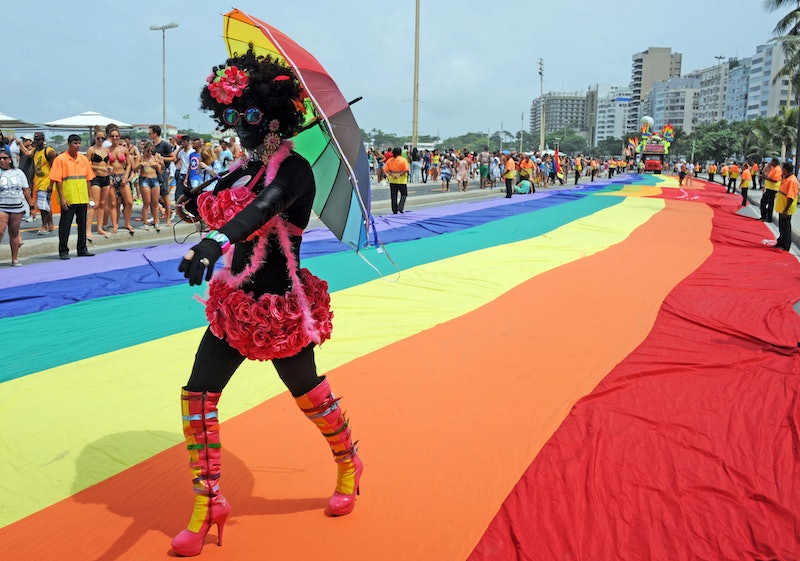 Acceptance is on the rise for the LGBTQ community, no doubt about it. However, it's important to stop and think about some of the negative stereotypes about the LGBTQ community that persist, how we might unwittingly be perpetuating them, and — most importantly — how we can stop perpetuating them. It's never a good idea to reduce someone down to a trope or a stereotype; people are so much more complex than just one single "type."

Where do these tropes come from? It's often not a simple question, but looking at the current climate for LGBTQ people can help provide some context. While marriage equality for same-sex couples is a huge step forward, providing all married couples with equal rights and protections regardless of sexuality, it is certainly not the end of the line. In fact, there are many issues left to battle, including protection from employment discrimination, housing discrimination, and access to fair and equal medical care. The trans community faces these issues and more, as gender identity has less legal protections and recognition in general.

If you find yourself guilty of relying on these tropes, don't beat yourself up over it. The media has a lot of influence in this sort of thing, and portrayals of LGBTQ people in movies, TV, and books often reinforce these stereotypes. My advice is just to remain aware of these notions as stereotypes and do your best to educate yourself and remove them from your mind. Stereotyping doesn't make you a bad person, but if you have the opportunity to educate yourself and become more aware, it's always a good move — especially when the LGBTQ community is already a minority, and can use all the help and support they can get.

So what are these tropes? There are tons, but let's start with these five:

This one, I think, is particularly popular when people are in high school. You know, the stereotype where there is one openly gay boy in your school, and he's super "fashionable" and all the girls want to be his best friend? While you should certainly befriend whomever you want, it's demeaning to characterize people based on stereotypes. Sure, some gay men certainly love fashion. So do some straight men. So do some men who identify as things other than gay or straight. Gay men who love fashion also love many other things and have complex, real personalities behind their designer polos. If you want to go shopping, sure! But don't see that person as a one-dimensional caricature; it devalues them as the full, complete person they are. Also, the stereotype sends the message that gay men only look and act a certain way, when that's simply not the case. That message can be damaging to those who feel invisible because of that societal expectation.

2. The Lesbian Who Wants to Seduce You

This one, I think, becomes really popular on college campuses. There's one openly out lesbian everyone knows is gay and you assume she wants to sleep with you. Maybe she does! Maybe she is legitimately flirting with you! If so, and you're interested, good for you! The reality is, however, that lesbians typically do not want to seduce non-queer women for jollies. Lesbians may very well want to be your friend, or may flirt with you before realizing you're heterosexual, but no, if a lesbian befriends you, it does not equate with her wanting to "turn you" gay. Just like people can't be "turned" straight, someone can't be "turned" gay. While people discover their sexualities at all different points, and for some people, sexuality is fluid, it's not up to any sole person to "change" someone else's orientation. This stereotype also sends the message that lesbians are desperate for sex, which, again, is simply is not the case.

3. The Bisexual Who Just Wants Attention

This stereotype pops up a lot in bar and club settings. The idea is that when women identify as bisexual, they're actually just doing it for male attention, or to have a threesome with their boyfriend. Now, plenty of people do have threesomes with their boyfriends or girlfriends, and that's fine! However, the idea that sexuality is performative and for the male gaze is deeply rooted in sexism and the idea that a woman's sexuality isn't her own. As far as bisexual men are concerned, the stereotype is damaging in that people generally assume they don't exist: Seriously, tons of people allege that men are either straight or gay, period, and it baffles me. Bisexual men are real, and their orientation is as valid as anyone else's.

While all of the tropes on this list are damaging and hurtful, I actually think this one is the worst. The transgender community already faces huge obstacles: For transgender youth, 75 percent report feeling unsafe at school because of bullying. For transgender adults, housing is a literal nightmare: One in 10 transgender adults are evicted from their homes once their gender identity is revealed, and one in five face discrimination when seeking a home. There are also less employment protections nationwide in terms of gender identity, so you can still be fired for being transgender in many states in the country. So, when people think being transgender is just about needing to accept or love yourself more, it's incredibly demoralizing.

5. The Queer Person Who's Just Trying To Be Edgy

Now, there are a lot of feelings about the use of the word "queer" in general. That's really it's own discussion, but in short, it can be very charged and emotional, as until recently, it was considered a slur against the LGBTQ population. However, many people now use the word "queer" to describe themselves. For some people, this means they don't identify with other aspects of the LGBTQ umbrella. For others, it's actually a reference to them being genderqueer, which is its own (and awesome!) thing. However, a stereotype exists that when people identify as "queer," they're attempting to be "edgy" or "liberal" without giving a second thought to the identity as a real and valid thing. Unfortunately, I've seen this happen both inside and outside of the LGBTQ community, which reminds me: Even if you identify as LGBTQ yourself, it's not your place to judge people who identify within the community in a way that doesn't make sense to you, or that you personally don't connect with. Policing and shaming are not OK just because you also identify as a sexual minority.

Now, sometimes people associate themselves with stereotypes for their own reasons. Some people are joking, and some people do it as an attempt to fit in and gain acceptance. Regardless, it's best not to speak for others, so do your best not to impose these tropes onto the actual LGBTQ people in your life. Members of the LGBTQ community are real, individual people with their own complexities and personalities, but because of the lack of societal acceptance and media representation, stereotypes often preside. It's important to always keep an open mind and avoid relying on stereotypes as a lens to see people, even if you mean it in the best or most lighthearted intentions.

More like this
The 19 Best Tweets & Memes About Bisexual Awareness Week
By Lexi Inks
An Honest Review of MeUndies Boxers, According To A Non-Binary Person
By Megan Lasher
Pro Footballer Zander Murray Is "Blown Away" By Support After Coming Out
By Sam Ramsden
10 Ways To Be More Empathetic To Your Partner
By Raven Ishak and Lexi Inks
Get Even More From Bustle — Sign Up For The Newsletter