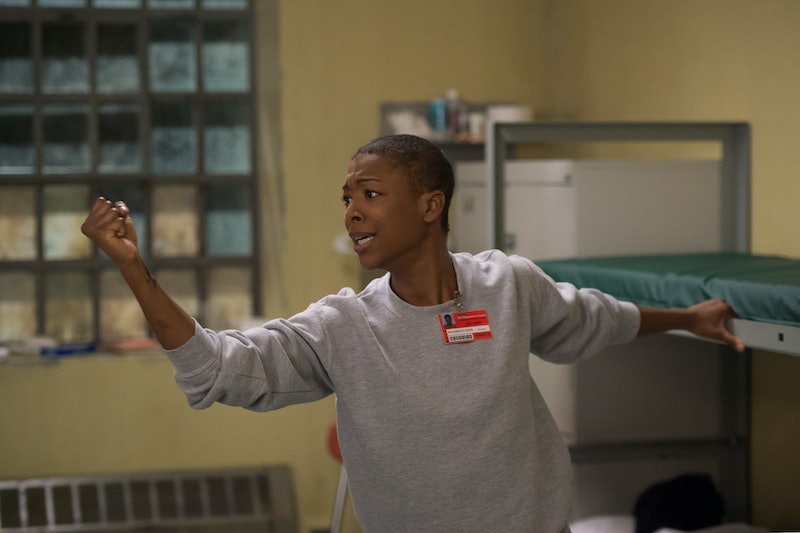 Orange is the New Black Season 4 takes viewers on an emotional rollercoaster, but saves the ultimate gut punch for the penultimate episode, If you're done marathoning the Netflix series, then you know what I'm talking about: The tragic death of Poussey Washington (played by Samira Wiley) in Episode 12 at the hand of a corrections officer holding her down and accidentally suffocating her. I spoke with Samira Wiley about how Poussey's death on Orange is the New Black is inspired by Black Lives Matter and how the fourth season addresses racial injustice.

"I believe it's our job as artists to reflect what is going on in our time," she says in an interview with Bustle. "It's our responsibility. To have Jenji and her team of writers to tell this story and to have this in the consciousness of people whose lives Black Lives Matter hasn't permeated wherever they are — it's extremely important and I'm extremely happy to be part of it."

One of the main storylines in Season 4 is the questionable decisions by the COs overseeing and guarding Litchfield. In Episode 12, titled "The Animals," the tensions between the COs and the inmates at Litchfield reaches a fever pitch. The prisoners stage a peaceful demonstration in the cafeteria, but the COs move to disband it by pulling the inmates off the tables on which they're standing. CO Bayley pulls down Poussey and kneels on her small frame, while fighting off Suzanne "Crazy Eyes," who is freaking out about everything. Poussey can't breathe, but Bayley doesn't realize this until it's too late. It's a death that mirrors many real-life situations in which tragic deaths have come at the hands of law enforcment figures, such as the deaths of Eric Garner, Michael Brown, and so many others.

Since Season 4 dropped on Netflix, Wiley says she's been hearing a lot of strong reactions to Poussey's death — and that was the intention. "People seem to be either really mad or really worried or really sad. What we wanted people to feel were huge reactions from what we did and that's what people are feeling," she says. "People are having conversations, because they're confused or they don't know what to do or think. I think people need to keep talking about it, because the people who the episode is mirroring the actual lives of — like Michael Brown and Eric Garner — would want people to still keep thinking and talking about them as well."

Wiley says she learned that Poussey would die before Season 4 began and that it would be an important storyline in the vein of Black Lives Matter. She had to keep the news a secret for about a year from the cast, until the script was written — and it just happened to be authored by her real-life girlfriend Lauren Morelli, a writer for the show.

"It was this daunting thing over me the entire season," Wiley says. "Not only was it a secret from the people in the show — I didn't tell my parents, I didn't tell anyone. But it was such a relief to be able to have the script come out and I feel the same sort of relief now having the show come out, because it's such a heavy thing to hold onto for so long ... I was honored that they were using my character to be the vessel for this powerful story."

And, hopefully Poussey's death will make viewers really think about the real life people it mirrors, and how to keep that kind of violence from happening again.