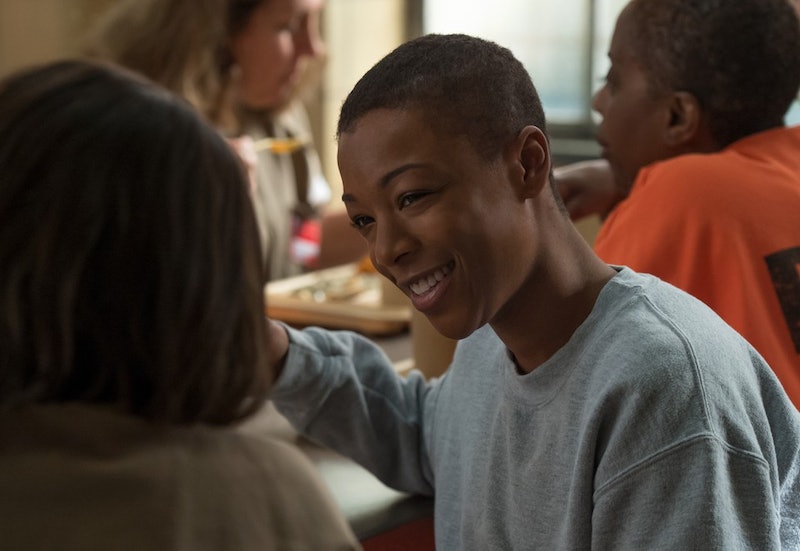 Unless you've finished Season 4 of Orange is the New Black, I'm going to need you to back slowly away, because there are major spoilers ahead. But if you have seen the whole thing, let's get down to business: unraveling the death of a fan favorite character, the lovably and passionate Poussey Washington, in the second-to-last episode of Season 4. In the finale episode, "Toast Can't Never Be Bread Again," viewers see a surreal and happy Poussey flashback that is unlike any other flashback OITNB has done. This, as well as Season 4's focus on regret and time travel, which stemmed mainly from Lolly's potato-powered time machine, makes it seem like Poussey's final flashback could actually be a dream or heaven.

In the scene, a young and vibrant Poussey spends a night in New York City, hanging out with a few of her friends before heading to Amsterdam to start her life fresh. The group intends to see The Roots at a club, but end up at a white cover band called "The Rootz." They're about to watch the set, but when Poussey's phone gets stolen, she chases after the thief, only to lose him and find herself lost outside. Luckily, she ends up being rescued by a group of drag queens who take her to an incredible party. After the party, which is full of dancing, drinks, and amazing music, Poussey uses the drag queens' phone to contact her friends and sets off again — this time on the bike handlebars of a player in Improv Everywhere dressed as a Buddhist monk. Poussey and the "monks" head towards the river, where they sit together by the water, sharing a joint and telling stories. At the end, Poussey smiles knowingly at the camera, looking happy, excited, and ready for the world.

The sweet and lively flashback gives a huge contrast to the horrific events of the actual episode, which see the body of Poussey left on the floor of the cafeteria, the scene where she was murdered the night before in a peaceful protest by the prisoners gone awry. During the finale, MCC's lawyers struggle to pick up any dirt on Poussey they can find in order to slant the news of her death in their favor, but they find nothing. Meanwhile, on the other side of the bars, inmates and COs struggle to deal with the death in their community.

The insane contrast between the sickening events at the prison following Poussey's death and the wonderful flashback is striking, to say the least. The show definitely makes its intentions — that Poussey lived a full, happy life, making her death in prison even more unjust — known by the flashback, and the seemingly breaking of the fourth wall when Poussey smiles at the camera is meant to make viewers think long and hard about the loss of the character's life. But its also making a lot of people think the flashback didn't actually happen, but was actually a dream or some sort of heaven.

As Bustle writer Amy Roberts theorized, "it could be that we weren’t seeing the actual events of her backstory, but instead a version of them wherein she’s gone back and tried to fix the mistakes which led to her being arrested" (the flashback seems to take place the same night Poussey was arrested for drug possession). After all, Poussey and Soso did spend time in Lolly's time travel machine, and though Poussey spoke of looking forward to her post-prison future, many fans can't help but wonder what would have happened if she had never been to prison at all. Maybe, in her actual flashback, Poussey didn't accept the drag queens' invitation but instead stumbled, lost and afraid, around Brooklyn, and got picked up for trespassing and possession. Instead, this flashback sees her surrounded by happiness at a party, then with a bunch of friendly fake monks, who she freely shares her marijuana with (thus having less on her if she were to be questioned by police). Perhaps Poussey's into-the-camera smile is meant to show us that she's thinking, "Yeah, I fixed it."

In a sense, it reminds me of the famous short story by Ambrose Pierce, "An Occurence at Owl Creek Bridge." In the story, a plantation owner named Peyton Farquhar is captured by Union officers and set to be hanged on Owl Creek Bridge. Somehow, he manages to free himself and float downstream until he makes it to the gates of his plantation. Right before he sees his wife's face, though, he dies — it turns out that he had imagined the whole thing and was actually hanged.

What if Poussey's flashback is this sort of dream state, right before death? After all, the character was known for staying positive and being a dreamer, so the idea of her inventing some sort of happy fantasy milliseconds before her death isn't that far out a possibility. Another option is that the flashback is some sort of fantasy heaven. Maybe Poussey made it to her own personal heaven, full of magical nights like this one, with prison never a possibility. Its a comforting thought, that even though her death was so mind-numbingly horrible, Poussey would get to spend the rest of eternity in a happy place.

I don't think we are supposed to know why exactly Orange is the New Black chose to give Poussey such a fanciful flashback ending. It, like many things in media, is probably up to the viewers' interpretation, but what I can be certain of is that the contrast between Poussey's horrible death and her beautiful flashback is stunning and important. Once upon a time, Poussey was just a normal human being having a crazy, fun night in the city she loved — not an inmate unjustly smothered under the body of an ill-equipped corrections officer.