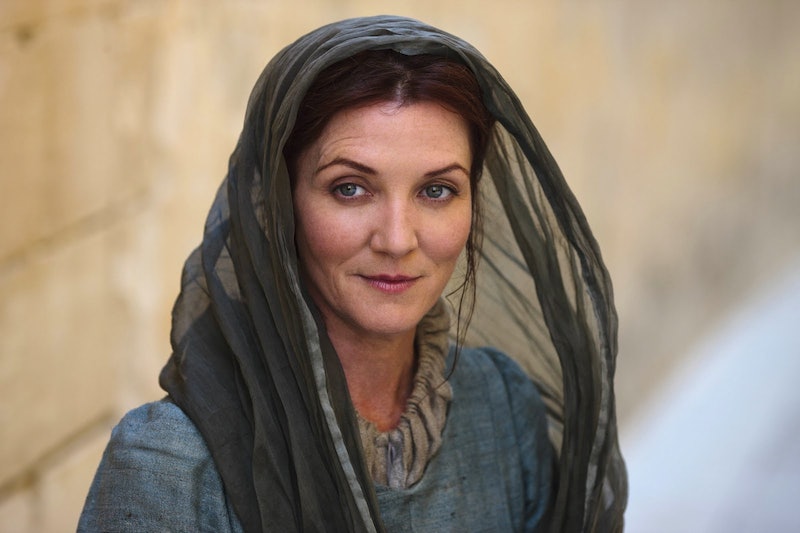 One of the most shocking reveals in George R.R. Martin's A Song of Ice and Fire series has not come to pass on Game of Thrones, but fans are still holding out hope that Lady Stoneheart will appear before the series ends. In truth, it feels like the show has missed its chance to bring back a vengeful, undead Catelyn Stark to seek justice for her family, but every season has included at least one scene that left fans wondering if Lady Stoneheart was on her way. With so many moments hinting Lady Stoneheart is out there, it is no wonder fans refuse to give up hope.

In case you are not entirely clear on who Lady Stoneheart is, she is Catelyn reborn, thanks to Lord Beric Dondarrion — but she is nothing like the Catelyn fans once knew and loved. With her body partly decayed and her slit throat making it impossible to talk unless she covers the wound, Lady Stoneheart leads the Brotherhood Without Banners to crush all those who hurt her family in life. She is ruthless, downright scary, and devoid of the humanity that defined Catelyn.

She plays a significant role in Brienne's story and Jaime's as well, but despite the many moments where Lady Stoneheart could have made a natural entrance on the show, she has not appeared. Here are all the times Game of Thrones made fans believe Lady Stoneheart was coming, only to jerk away the vengeful zombie football like a bunch of Lucys.

Way back in Season 2, Brienne swore her fateful oath to serve Lady Catelyn and it seemed like the show was laying the groundwork for Lady Stoneheart's future appearance. It is Brienne's oath to Catelyn to return her daughters safely that makes Brienne a target for Lady Stoneheart's wrath in the future.

2. The Introduction Of The Brotherhood Without Banners

When the Brotherhood Without Banners made their grand entrance in Season 3, it felt like it was game on time. The minute Beric was introduced, it was only a matter of time before Lady Stoneheart would follow, right?

When the Freys, Boltons, and Lannisters murdered Robb and Lady Catelyn at the Red Wedding fans held their breathe because they thought they knew what would happen next.

Not only was the episode titled "Mhysa" meaning mother, it was the episode directly following the Red Wedding. While it did feature the aftermath of the wedding, Lady Stoneheart did not appear in the episode's final minutes even though book fans were convinced she would.

When Jaime gave Brienne Oathkeeper it not only put her on a path to find Sansa and Arya, but gave her a visible connection to Jaime. Since the sword was partly responsible for Lady Stoneheart believing Brienne betrayed her, the beautiful scene also carried a sense of foreboding with it.

When Season 4 came to an end with Brienne finding and losing Arya, the next logical step had to be a Lady Stoneheart reveal, and yet the only thing that happened was an epic showdown between The Hound and Brienne.

After Sansa refused Brienne's offer of protection, Brienne and Podrick spent the rest of Season 4 watching for a candle to be lit in Winterfell. Every single time the show returned to them it felt like a massive tease. With the two of them stuck doing nothing, Lady Stoneheart would have been a welcome distraction even though it is the Riverlands she haunts in the books, and not the North.

The Season 5 finale was called "Mother's Mercy." The writers were trolling the fans so hard.

9. The Return Of The Brotherhood Without Banners

When The Hound and the Brotherhood Without Banners returned in the Riverlands, it seemed there was hope for Lady Stoneheart after all.

Now that Brienne has saved Sansa and returned her to Winterfell with Jon, the big question is what is next for her? When Sansa sent Brienne to the Riverlands to meet with the Blackfish and she ran into Jaime, it once again felt like Lady Stoneheart was lurking just out of sight.

11. Brienne Rides Off With Podrick In The Riverlands

Not only have the Brotherhood Without Banners been reintroduced, but Jaime and Brienne are both back in the Riverlands. The stage for Lady Stoneheart to appear has been set one last time. This is definitely a now or never situation.

Either the Game of Thrones writers are playing the longest game ever, or Lady Stoneheart is destined to only live within the pages of the books.