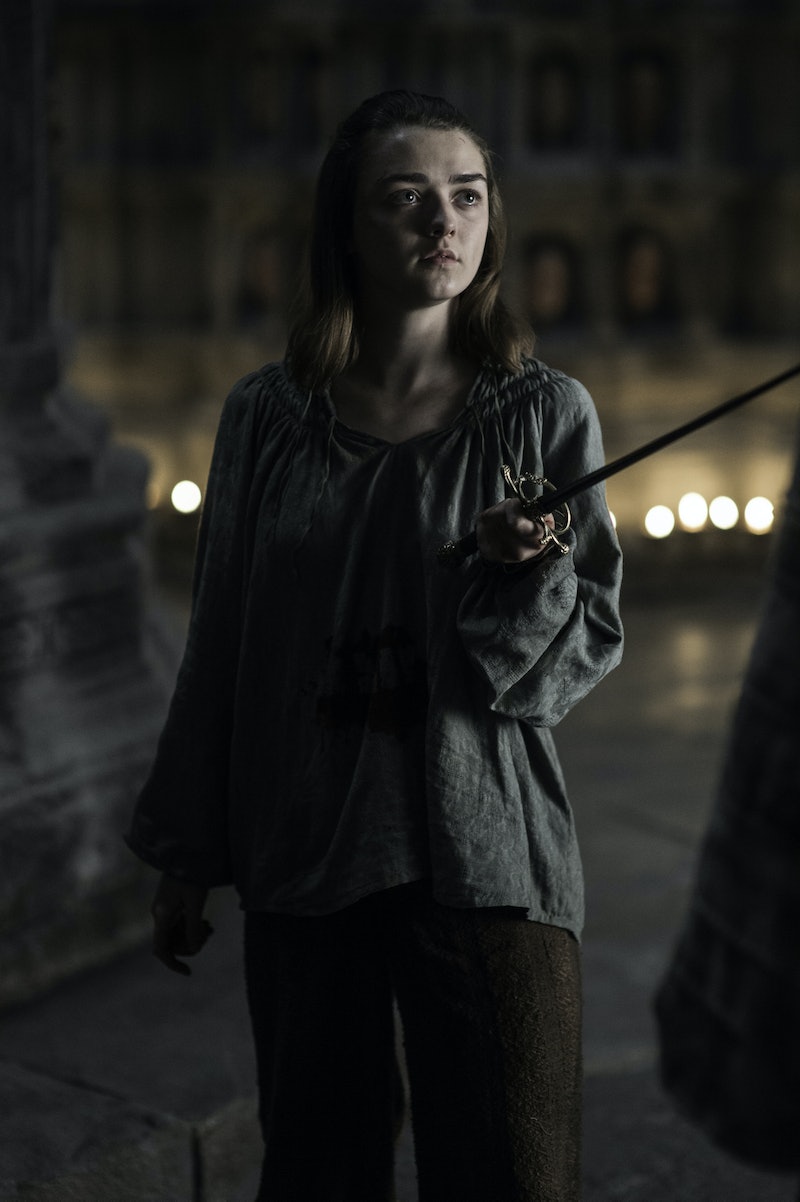 House Stark has truly never been stronger. In the Season 6 finale, Arya killed Walder Frey on Game of Thrones — so does that make her Lady Stoneheart now? It definitely means another name has been crossed off her list.

Here I thought Jaime Lannister was going to avenge Catelyn Stark and turn against the Freys in a major way. One one hand, I'm almost a little disappointed that it was Arya who killed Walder — and partially because distances on this show have lost all meaning. How did she get to Riverrun so fast? Remember Season 1, when it took like five episodes for Ned to get to King's Landing? Now it seems like everyone from Arya to Varys can freakin' apparate. However, the death scene was just too cool, so I will forgive Game of Thrones their logistical trespasses.

It was also a scene ripped from the pages of Shakespeare's Titus Andronicus — Arya baked the younger Freys into pies! Gross! She also, apparently, has retained the ability to face swap. Arya introduced herself to Walder under the guise of a maid serving him food, and then revealed herself when she went to make her move. I guess quitting her job doesn't mean losing that power. Jaqen's rules are strange. Arya Stark is not No One, certainly. But she is faceless. Whatever. I'm just glad that creepy Walder Frey and his even creepier family is gone. The Lannisters don't need them. Nobody needs them.

Where is Arya going to go from here? I can't imagine that she's planning on checking in with Jon or Sansa anytime soon. She is clearly a girl on a mission. That's a pity, because they got credit for "avenging the Red Wedding" that I think she may deserve as well. Still, Arya Stark is back in Westeros, and her enemies better watch out!

More like this
Emilia Clarke Shares More Details About The New 'Game Of Thrones' Series
By Maxine Harrison
Yes, Joseph Quinn Is Actually Playing The Guitar In This Epic 'Stranger Things' Scene
By Alyssa Lapid
Vecna Officially Has A Fan In 'Stranger Things' Star Jamie Campbell Bower
By Alyssa Lapid
Natalia Dyer Opened Up About Steve & Nancy’s “Lovely” ‘Stranger Things’ 4 Dynamic
By Grace Wehniainen
Get Even More From Bustle — Sign Up For The Newsletter