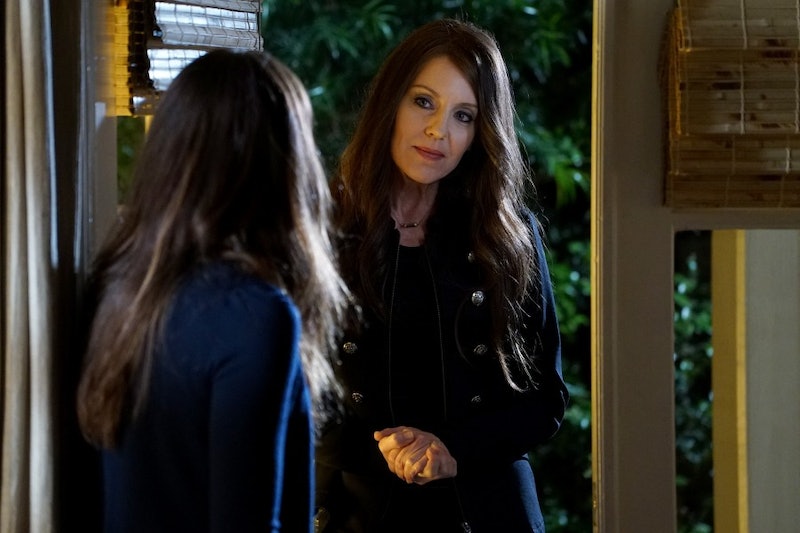 How many long lost, secret members can one family have? When it comes to the DiLaurentis clan, it appears that the limit does not exist. Pretty Little Liars fans spent years thinking that the A reveal would be the most important moment on the show — but the Season 6 bombshell that Mary Drake is Jessica DiLaurentis' twin and Charlotte's mom was far more exciting and jaw-dropping in the best way possible. And now, it seems like the twin reveal is what will ultimately lead us to the full story of the A game and the truth about Charlotte. There's no shortage of creepy, interesting theories about Mary Drake on Pretty Little Liars — because she may be the most mysterious character the show has introduced. (And that's really saying something.)

Even when she wasn't onscreen, Mary was a central focus of the Season 7 premiere and armchair detectives are busy dissecting every possible clue. Her seriously creepy interaction with Spencer has fans speculating about their potential connection — and then there are those Radley files and a passport that could help us figure out who Mary is conspiring with. At this point, anything's possible — but here are three intriguing theories about Jessica DiLaurentis' twin.

It's always seemed like a massive plot hole that Sara went missing around the same time as Ali, but Charlotte didn't take over the A game until two years later. So, where was Sara and what was she doing before she teamed up with Charlotte? Now that Mary Drake is in the picture, it's looking more and more likely that she was pulling the strings and Charlotte was working for her mom. Reddit user covermaker suggests that Mary kidnapped Sara — possibly because she reminded her of Charlotte.

In this scenario, Sara could have been held in the bunker by Mary for two years until Charlotte was released from Radley. At that point, Sara would have been eager to form an alliance with anyone and she would have latched on to Charlotte if she displayed any sort of kindness towards her. Although she maintains she's a victim, Sara told Ali that Charlotte was "like a sister" to her. Perhaps both things are true — she was Mary's victim, but she forged a strange bond with Charlotte after two years of captivity.

This theory would also explain why Sara won't leave Rosewood and has been digging through the old Radley files — perhaps she's trying to uncover as much information as possible about Mary Drake because she wants to blackmail her or exact some form of revenge.

Based on the premiere's scene between Spencer and Mary, it definitely seems like there's history between these two characters. My initial reaction was that they're probably related somehow (because, I mean, the Hastings and DiLaurentis family trees certainly overlap). I quickly realized I wasn't alone — multiple theorists on Reddit and Tumblr speculate that Mary is Spencer's biological mother and it actually makes a lot of sense.

Spencer and Mary bear a physical resemblance and their brief conversation yielded several clues — Mary will "never turn down caffeine" (much like Spencer) and the episode made a point of reminding us that they both love to travel. Sure, these aren't exactly uncommon passions — but it felt as though showrunners went out of their way to draw parallels between Mary and Spencer.

It seems likely that Mary pretended to be Jessica DiLaurentis at various times throughout the series — and Peter Hastings had an affair with Jessica. It's a creepy but plausible possibility that Mary impersonated Jessica at some point during the relationship and became pregnant with Spencer. During their conversation, Mary said that none of her ex-lovers still speak to her — perhaps this was a jab at Peter.

If Spencer is Mary's biological child, it could help explain why Peter and Veronica showed such blatant favoritism towards Melissa. Furthermore, Reddit user baphometswig points out that during Charlotte's time as A, she was especially hard on Spencer — this could be because she knew they were siblings and she resented the fact that, on the surface, Spencer lead a very privileged life.

Mary Drake's passport holds a lot of clues — the one that jumped out immediately was that she'd recently returned to Rosewood from London, which is home to the ever-suspicious characters of Wren and Melissa. But, Toby also casually mentioned that she spent time in Latin America. I doubt it's a coincidence that Mary just happened to be in the same area where Nicole went missing under highly suspicious circumstances.

Of course, this raises a whole new crop of questions. Did Mary target Nicole in order to hurt Ezra for reasons that will later be revealed? But, with all apologies to Ezria shippers, I'll never trust Ezra — I can't get past his creepy relationship with a very young Ali and the fact that he deliberately mislead Aria for so long. So, the Latin America connection has me wondering if Ezra is in the A game with Mary and something went murderously wrong.

There's no shortage of intriguing theories about Mary and she's definitely one of the most complex characters to appear on Pretty Little Liars — so I can't wait to find out the details of her backstory. No matter how much we theorize, I'm sure there will still be plenty of surprises.