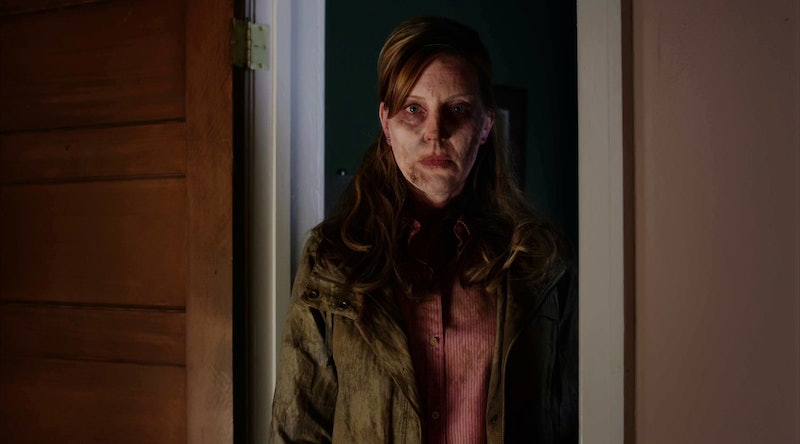 The moment that Pretty Little Liars fans were waiting for finally arrived in the Season 6 finale. PLL finally revealed an identical twin, and, unsurprisingly, the twin was connected to the DiLaurentis family. It turns out that Jessica DiLaurentis has a twin named Mary Drake, and that Mary is actually Charlotte's biological mother. The reveal that there's another person with Jessica's face running around Rosewood is a total game changer, and it's also bringing up a whole bunch of questions about everything that went down with Jessica in the past. There's simply no way that Mary and Jessica being identical twins won't come into play when uncovering all of the secrets of the DiLaurentis family, and it's begging one big question: could Mary have pretended to be Jessica? The Pretty Little Liars spoiler account That's What -A Said heavily implies that it's possible.

That's What -A Said has been tweeting hints and interacting with PLL fans for years, and, though no one knows who runs the account, its accurate spoilers suggest that the account belongs to someone who works behind the scenes on the series. That's why when That's What -A Said tweets, fans listen — and the account's new tweet about Mary and Jessica should have us suspecting foul play on the part of one identical twin:

While it's possible that the account is trying to throw us off our tracks (or knows less about the upcoming season than their tweets imply), I have a hunch that this is one potential spoiler we can count on. After, it's eerily similar to a major plot point in Sara Shepard's book series, upon which the show is based. (Warning: Spoilers for the Pretty Little Liars book series ahead!) In the series, it's actually Alison who has an identical twin named Courtney, who, like Mary, has spent most of her life in a mental hospital. Eventually, Courtney takes over her twin's life, and no one is any wiser — until Alison kills her for stealing away her perfect world. Could a similar twist happen on the show?

It's definitely possible. Jessica has always seemed like she's had two personalities, so what if it's more true than we could have ever expected? If these two have switched places before, we might have to reevaluate everything that we saw "Jessica" do over the course of six seasons. We were told that Jessica was having an affair with Bethany's father, but now that we know about Mary, it's totally plausible that Mary pretended to be Jessica and seduced Bethany's dad. Maybe Mary was even more involved in the Big A story than we thought — perhaps it was really Mary who buried Alison when Charlotte hit her over the head with that rock.

There's also the possibility that Mary has been living as Jessica for quite some time — perhaps as long as we've seen "Jessica" since she moved back to Rosewood. Jessica was definitely acting quite sketchy when she returned home following the discovery of "Alison's" body, and maybe that's because she wasn't the same woman we saw during the Season 1 fashion show. Maybe Mary has been lurking in Rosewood this entire time, and only now wants to reveal her true nature to the world.

Only time will tell if Mary was living Jessica's life, but here's hoping that her backstory is just as shocking as the initial twin reveal.