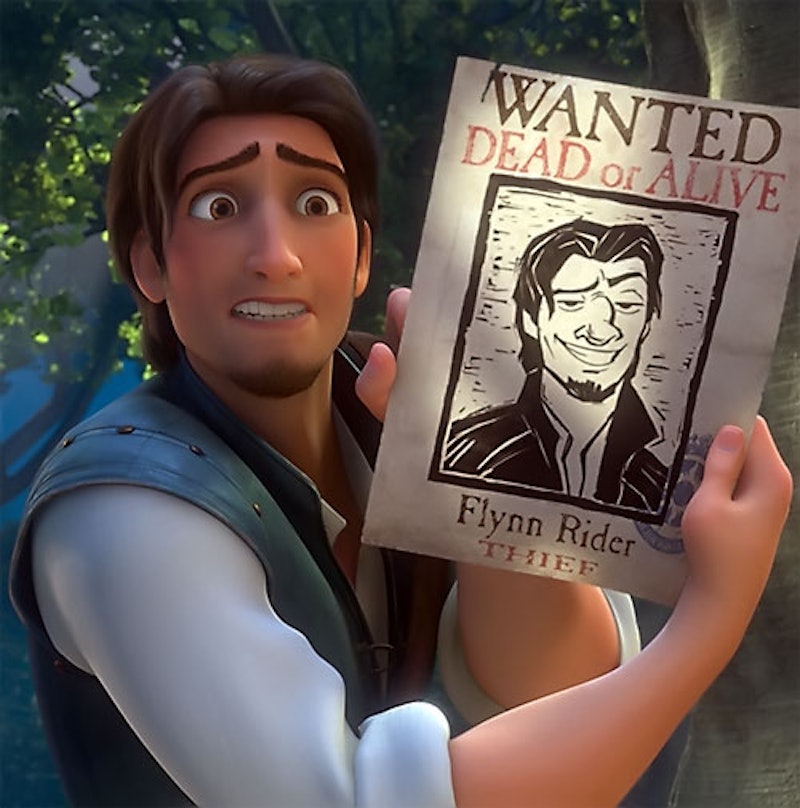 I have to admit something. As soon as I started watching Tangled, I wasn't a fan of Rapunzel's love interest, Flynn Rider. Because while, yes, he does end up falling for Rapunzel and ultimately risking his life for her, when it comes down to it, Flynn Rider is a wanted criminal, who's done some pretty uncool things. And that, along with his all-too-familiar smirk, prevented me from ever falling for his charm. Even after he and Rapunzel started their journey of living happily ever after, the bearded Disney prince's original impression never left me. Because when you really think about it, Flynn Rider is one of the worst Disney princes among the ever-growing list of handsome animated love interests.

But before you yell at me and tell me I'm wrong, just hear me out for a second. Flynn Rider — although a generally understanding and well-groomed handsome prince — has an array of baggage. From his criminal record to the kinds of people he associates himself with to his clear obsession over his own looks, Flynn just isn't the kind of guy I could see myself taking home to my parents and settling down with. While, yes, I can totally get how Rapunzel fell for his hidden soft side underneath his hardened outer image, I just don't think I could ever trust Flynn Rider in the long-term. Because, as charming as the bad boy may be at first, he's got some serious issues. Here are the ones that may be just a little bit too tough to push past.

Ever wonder how he got so good at the smolder? Well, practice makes perfect. Rapunzel was alone in a tower having never even met a guy in her entire life and Flynn came swooping in to take advantage. I wouldn't be surprised if he's had some experience behind him. Or if he'll ever even tell Rapunzel about it.

Flynn is one of those guys who looks good and knows it. He wants everyone to be aware of how good-looking he is and he wants everyone to marvel at his fame. As much as he cares about Rapunzel in the end, I can't help but wonder if he's ever boasted about scoring the lost princess.

At the start of the movie, Flynn is out for power. All he wants is the crown and he's determined to do whatever it takes — including using a helpless girl in a tower — to get what he wants. And while he may have fallen for Rapunzel, that doesn't mean that his motives have completely disappeared. Plot twist: What if he knew Rapunzel was the princess all along? Just sayin'.

4. He's Got A Criminal Record

And that's not going to change. From stealing to treason, Flynn is going to have to pay for his crimes eventually. And do you really want to be caught in the midst of all of that when the past comes to haunt him? Yeah, I don't think so.

Remember when Flynn lied about his name being Flynn? Yep, he's really an orphan named Eugene. And while he did eventually own up to his lie, I am scared to find out if he's been lying about anything else or if he's going to lie again in the future. All I'm saying is that trust is the key to any relationship.

6. His Best Friend Is A Horse

Let's face it. Flynn must have pushed a lot of people away over the course of his life. And now even his horse (who's forced to stay with him, honestly) can't stand him. That sure says a lot.

7. His Social Circle Isn't The Greatest

And, aside from his horse, the people that he's surrounded himself with over the years (and the image he portrayed) is going to carry with him over time. From his co-conspirators to those he pissed off, Rapunzel may have to expect some angry and not-so-wonderful house guests from time to time.

Out of all of the Disney princes, there's something very unique about Flynn's sense of humor. While he does grow to respect Rapunzel, he also tends to joke around by mocking her, saying snarky things, and just acting like that kid you used to sit next to in grade school who would nag you all the time.

Flynn's got a pretty high level of impatience and the need for immediate results. His journey with Rapunzel is a nuisance to his schedule. He's the guy who I'm betting will tap his foot and lose his temper over Rapunzel taking too long to brush her hair in the morning. Seriously, I can totally picture the bathroom fights now.

Now, I know what you're thinking. People change and, perhaps, I'm not giving him the benefit of the doubt. I mean, after all, he did appreciate Rapunzel's magical hair without using it to benefit himself. But all I'm saying is that Flynn Rider changing into the humble and loving Eugene is promising a lot of permanent change from who he was in the beginning of the film. I'm just concerned for his consistency in his day-to-day life with Rapunzel. Because, in the end, I just want the best for her. And, compared to the other Princes, Flynn has a lot of changing of himself and adjusting of his lifestyle in order to make his life with Rapunzel work.

So, here's to hoping he doesn't relapse into his old ways. And as for me? I'll happily go with Prince Eric or Frozen's Kristoff. There are just too many men to choose from in the Disney world for me to settle for Flynn Rider.