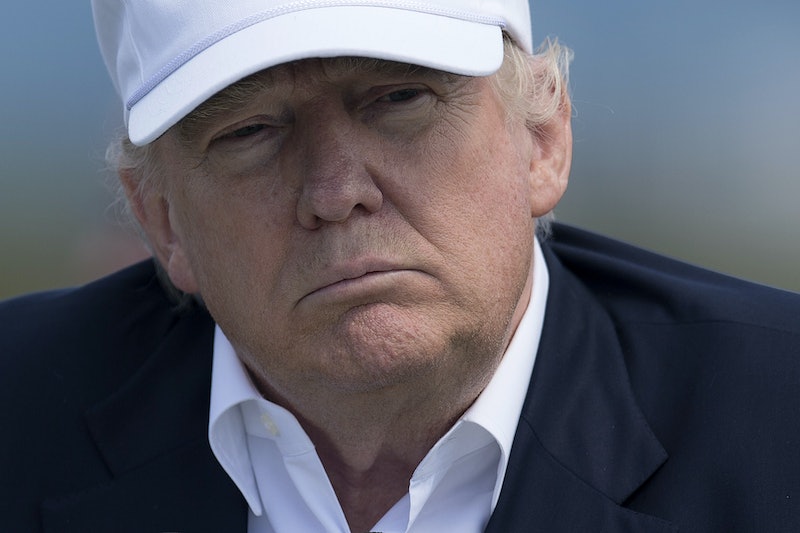 On Monday, the Supreme Court ruled on the most significant abortion rights case in two decades. However, presumptive Republican presidential nominee and prolific Tweeter Donald Trump was noticeably slow to respond. The Supreme Court overturned key parts of Texas House Bill 2 (HB2), which, as Justice Stephen Breyer wrote for the majority opinion, provide "few, if any, health benefits for women, pos[e] a substantial obstacle to women seeking abortions and constitut[e] an 'undue burden' on their constitutional right to do so."

It's a monumental opinion, and several politicians were quick to respond, including presumptive Democratic nominee Hillary Clinton, who tweeted, "SCOTUS's decision is a victory for women in Texas and across America. Safe abortion should be a right - not just on paper, but in reality." She was followed by Speaker of the House Paul Ryan, who tweeted, "I'm disappointed in the Court’s decision. But our fight to protect women’s health & promote life will not stop here." But hours after the ruling came out, Trump hadn't even tossed out one of his signature brash tweets.

Maybe Trump is steering clear of major events after criticisms of his walking press conferences which mixed his new golf courses with out-of-touch statements about Brexit like, “When the pound goes down, more people are coming to Turnberry, frankly.”

This has been a tricky subject for Trump over the course of this election. On his official presidential campaign website, Trump doesn't list abortion among his positions. In an interview with MSNBC's Chris Matthews in March, Trump said that women who obtain illegal abortions should be punished. Shortly thereafter, he walked back from his comments, saying that he didn't think women should the ones being punished for abortions — providers should be. He has said multiple times that he is pro-life and anti-abortion, but twice during the primaries, Trump said he supports the work of Planned Parenthood — an organization which, among other things, provides abortions. But if he was firm and consistent on the matter, he wouldn't really be Trump, would he?

Make no mistake, this decision does have political implications, and is likely to become a large part of the election, if only by extension. However, instead of weighing in on the first abortion rights case to hit the Supreme Court in more than two decades, Trump announced an economic policy speech in Pennsylvania scheduled for June 28.

Trump's Twitter account has been silent for hours. In a news cycle dominated by the first joint appearance of Sen. Elizabeth Warren and Clinton, aka the new Dream Team, Trump can hardly afford to be coy on important issues. He needs to seize every chance he gets to show any sort of understanding on important issues, instead of complaining that CNN is mean to him.

At this point, the silence from Trump on Whole Woman's Health is becoming deafening.