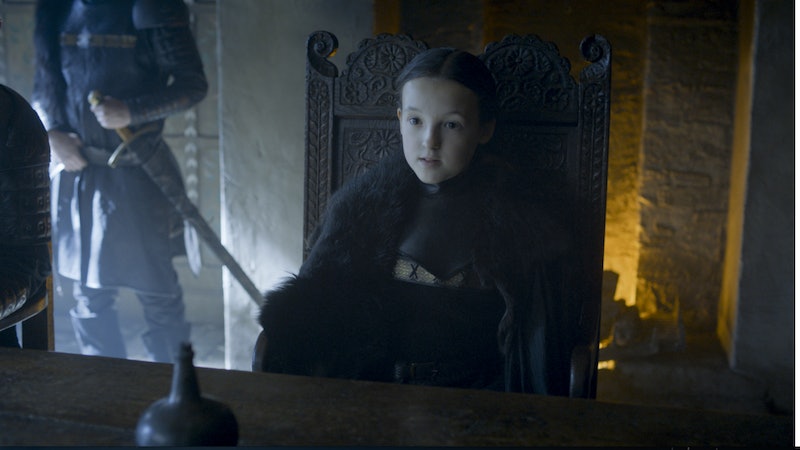 Game of Thrones is a series that features a lot of really badass ladies (yes, even the evil ones... ahem... Cersei). So it really came as no surprise when Season 6 whipped out a brand new heroine for us. Enter Lyanna Mormont, a sassy twelve-year-old who just so happens to be the reigning Lady of Bear Island. When we first heard of the tween in Season 5, it was by way of a raven she sent to then wannabe Iron Throne-hopeful, Stannis Baratheon. The raven carried a letter that announced her refusal to pledge fealty to the Baratheons because, “Bear Island knows no king but the King in the North, whose name is STARK.” The Starks and the Mormonts go way back, which is definitely why Lyanna Mormont is named "Lyanna"— the name is to honor the memory of one of the (many) dead Stark relatives, Lyanna Stark.

First, we should probably talk about the person who named our new favorite GoT character, Little Lyanna's mother, Maege Mormont. The She-Bear (as she is known) took over Bear Island when her nephew, Jorah Mormont (yes, that Jorah), fled Westeros because the Starks were after him for selling poachers into slavery to pay off his debts. Maege strived to redeem the Mormont name and get out of the money pit of despair her nephew created. She had two daughters (and five in the books), from a guy whose name we haven't learned yet, and she raised them to be her heirs. Both she and her eldest daughter, Dacey, died while serving under Robb Stark, so Lyanna took on the throne.

Since the Mormonts are so down with the Starks, it's no surprise Maege Mormont named her youngest daughter Lyanna just like Ned Stark's youngest sister, Lyanna Stark. Stark was the sort of woman who inspired monstrous events — her (maybe affair?) with Rhaegar Targaryen actually contributed to the start of the Targaryen/Baratheon war. Though Lyanna Stark had a pretty bitter end (though not the one everyone in Westeros thinks she did — whaddup, R+L=J?), she was definitely a person to be remembered.

It might also be that Maege was working it and trying to get into the good graces of the Stark family after her brother lost the Mormont honor and funds. The timeline is not clear for when Jorah up and exiled himself, but if it happened about 13 years before Game of Thrones' current events, it wouldn't be terribly off base to assume Lyanna's naming was a pointed political move. I wouldn't put it past the She-Bear at all.

It will truly be a delight to see what Little Lyanna brings to the table in the (most likely girl power-packed) seventh season of Game of Thrones. If she keeps being so darn intimidating and logical, I'm reasonably sure everyone will bow down and just agree that she should sit on the Iron Throne — and so another Lyanna may take down a Targaryen empire.