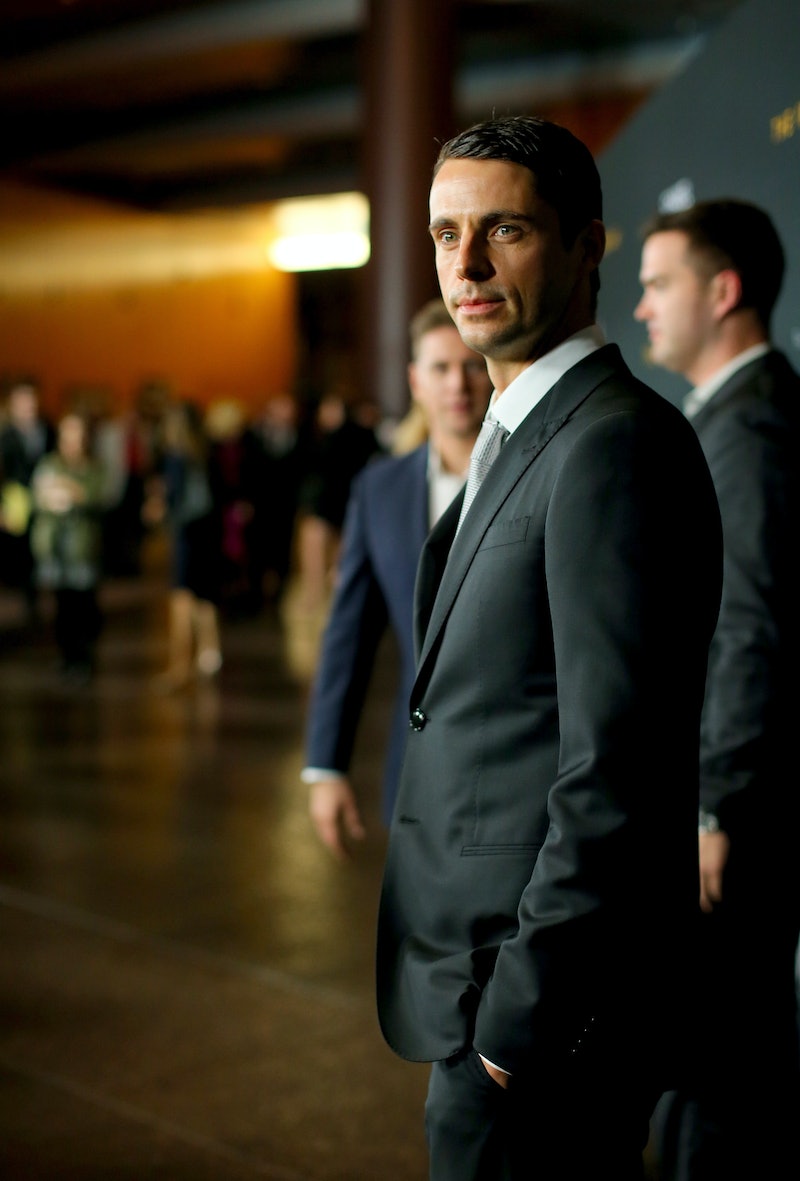 He wooed Alicia Florrick. He wedded Mary Crowley. Now he'll tangle with aliens — sort of. Matthew Goode will star in Roadside Picnic , a new drama pilot from WGN America, as originally reported by Deadline. The project will be an adaptation of the acclaimed 1977 sci-fi novel by Russian authors Arkady and Boris Strugatsky (previously adapted into a Soviet film titled Stalker in 1979). If the pilot is picked up to series, Roadside Picnic would be the latest in the network's recent spate of original programming, including Salem, Outsiders, and Underground.

What exactly does a seemingly innocuous "roadside picnic" have to do with aliens? Great question. According to Deadline, the show, like the book, will take place in "a near-future world where aliens have come and gone, leaving humankind to explore the wondrous and dangerous mysteries left behind" — like innocent forest creatures coming out to investigate the detritus abandoned by carefree picnickers who departed as suddenly as they came, to use the book's own analogy. (While the aliens themselves never make an appearance in the book, we'll see if that remains true for the TV show; especially if it becomes a successful long-running series.)

Here are five reasons you should be super excited about Roadside Picnic:

If you'll forgive the pun, Matthew Goode is so good(e) that it's about time he got his own starring vehicle. Whether on the big screen (Match Point, A Single Man, Stoker) or the small (The Good Wife, Downton Abbey, Stoker), the handsome Brit consistently elevates every scene he's in with his talent and charisma. (He's not bad to look at, either.) If Roadside Picnic helps elevate his profile and earn him some more name recognition, then I'm all for it.

Science-fiction can be a tricky proposition on television. For every success story (The X-Files, the Star Trek franchise, Lost), there are a million failures (FlashFoward, The Event, Terra Nova) or projects that never got the attention they deserved while they were on the air (Battlestar Galactica, Firefly, Fringe). So it's always admirable to see a network take a risk on a genre show. Hopefully this particular gamble will pay off for WGN.

Americans probably aren't as familiar with Roadside Picnic — or Stalker — Russian audiences, so here's a very brief primer, courtesy of Deadline: the story "explores the social ramifications of [the aliens'] visit, as seen through the eyes of Red, a veteran “stalker” … one of the brave souls willing to risk their lives by illegally entering the Zone to sell what they find on the black market." Red is described as "an “enigmatic, blue-collar contradiction” who can be quietly intelligent one moment — and utterly ruthless the next." He also has a daughter, Marie, "who is shunned because she is a child of the Zone."

Before he branched out into feature films (Thor: The Dark World, Terminator: Genysis), Alan Taylor — who will helm the Roadside Picnic pilot — made a name for himself on TV, directing episodes of such acclaimed series as The West Wing, Six Feet Under, Deadwood, Lost, Rome, Boardwalk Empire, The Sopranos, Mad Men, and Game Of Thrones (the latter three of which earned him Emmy nominations for his work — and one win). Yes, Taylor is the man who chopped Ned Stark's head off back in Season 1. I hope you can forgive him.

Until two years ago, WGN America was mostly watched for its reruns of popular syndicated TV shows; but, like a lot of networks in the wake of the recent Golden Age explosion, WGN got in on the original programming with the witchy thriller Salem and the acclaimed period piece Manhattan. This year, the network added the Appalachian drama Outsiders and the Underground Railroad series Underground to its roster; the latter in particular has earned WGN rave reviews and even some Emmy chatter. It will be exciting to see what the network comes up with next… including Roadside Picnic.

There's no premiere date set yet, but if WGN America picks up the pilot to series, you can expect to see Matthew Goode on your TV screen sometime in the near future. Thank Goode-ness!

More like this
Paul Mescal, Man Of Mystery
By Samantha Leach and Heather Hazzan
What’s New On Netflix: Ana De Armas’ 'Blonde' & A Nick Kroll Special
By Arya Roshanian
Here’s Everything Coming To & Leaving Netflix In October
By Jake Viswanath
Morfydd Clark’s Party Trick Is Only Impressive To “People Outside Of Wales”
By L'Oréal Blackett and Maxine Harrison
Get Even More From Bustle — Sign Up For The Newsletter