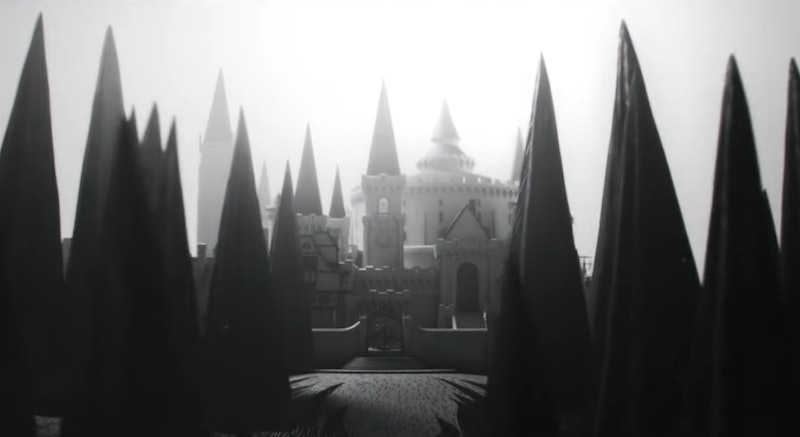 If any of you thought that this was going to be a run-of-the-mill Tuesday, THINK AGAIN, because J.K. Rowling just revealed the origins of the American Hogwarts, Ilvermorny. In fact, she dropped an entire story about it so epic and detailed that if it doesn't get its own movie I will be extremely surprised with the entire Potter-verse.

Somewhat unexpectedly, the tale of Ilvermorny begins with a young Irish girl named Isolt Sayre, a descendant of Salazar Slytherin born in 1603 to magical, pureblood parents who were kind to their Muggle neighbors and raised her well. Her wicked aunt murdered her parents when she was five and kept Isolt from attending Hogwarts, determined to keep her from being "tainted" by Mudbloods at the school. The adventure of Ilvermorny truly begins when Isolt flees her aunt, stealing a wand that has been handed down in her family for centuries before disguising herself as a young boy and boarding the Mayflower on its course to America.

Once she arrives, she separates herself from the Muggle settlers and strikes out on her own in Massachusetts, where her encounters eventually lead her to create Ilvermorny, the notorious North American magical school that J.K. Rowling revealed several months ago. Here are a few things you need to know:

Isolt Sayre Is A Badass And A Half

At 17 she boards a hip to an entirely new continent and then immediately strikes out on her own, managing to survive even when encountering a perilous magical creature known as a Hidebehind and saving a Pukwudgie from its clutches. Pukwudgies are magical creatures who notoriously dislike humans, but this one in particular, feeling indebted to Isolt, became her first — albeit highly reluctant — friend. Later they would go up against the Hidebehind again, saving the lives of two orphaned settler boys who also turned out to be magical.

There Are Plenty Of New Magical Creatures

The tale of Isolt and Ilvermorny hinges very specifically on her friendship with William the Pukwudgie and the help of a Horned Serpent she speaks Parseltongue with; it is from these two creatures and two others that Isolt, the two boys, and a Muggle man named James that she falls in love with and marries eventually create the Four Houses of Ilvermorny, which are as follows:

There's A ~Love Story~ That Will Matter In Fantastic Beasts

Isolt Sayre's wicked aunt most fears that Isolt will end up marrying a Muggleborn, and in fact she does end up falling in love with James, a Muggle man she stumbles upon and intends to Obliviate to forget the existence of magic. But their love perseveres and they not only raise the two orphaned boys as their own, but have a set of twin girls themselves. Remarkably, James is a co-founder of the school despite being a Muggle; he also crafts the very first traditional Wizarding wands in America.

Why is this relevant to Fantastic Beasts? In the latest featurette, the characters reference that Magical folk are not allowed to associate with No-Majs, and are banned from marrying them. It seems that the latest movie will have to address how the country's attitudes shifted so drastically in the past few hundred years, seeing as a Muggle was an essential part of establishing a Magical school in American in the first place.

Is it just me or does Rowling seem to have to redeem us Slytherins left and right and backwards after what she put our House through in the series? Not only does the Horned Serpent play an instrumental role in the creation of the school, but eventually Isolt buries Salazar Slytherin's original wand, where it grows to be a stubborn tree that turns out to have medicinal and healing properties. In Rowling's own words, "This tree seemed testament to the fact that Slytherin’s wand, like his scattered descendants, encompassed both noble and ignoble. The very best of him seemed to have migrated to America."

He is lazy, he complains all the time, and he is sassy AF. He is your new best friend.

Read the entirety of the history of Ilvermorny on Pottermore! And to learn more about the Ilvermorny Houses and what they may mean, check out Bustle's analysis here.