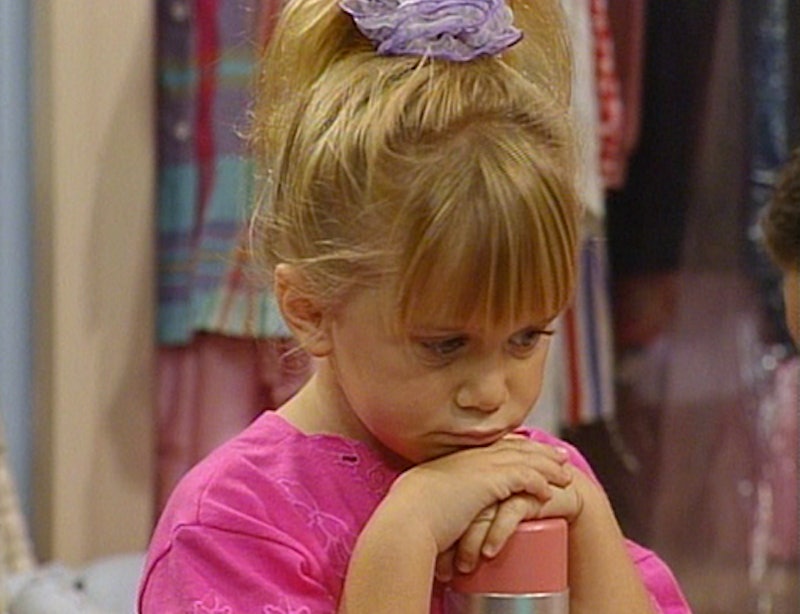 Maybe you’ve chalked up the ‘90s to straightforward, super saccharine sitcoms that always brought your mood up on a particularly rough day at elementary school (fractions are so hard). You probably buried, then, all the Full House episodes that made you cry as a child... and upon stumbling an effective YouTube clip would probably make you start bawling right now. Of all the aforementioned saccharine sitcoms and dysfunctional families they featured, the Tanners were definitely the most emotionally manipulative. That’s why there are so many tear-jerking Full House moments out there.

Now I’m gonna give you a head’s up: the vast majority of said moments and episodes are about the Tanner kids’ deceased mom, which is just so tough to watch. Others focus more on the strains between the living Tanner family members, like Jesse and Michelle’s unbreakable bond, and whatever drama-of-the-week Stephanie would get into. And some are, in fact, characterized by heartwarming, happy occasions. It’s certainly a mixed bag.

So prepare yourself, Full House fanatics, for the episodes that sprung tears into your eyes. And then maybe mainline the Disney episodes or something, because I think only a trip to the happiest place on Earth may fix that.

Let's face it, the initial episode of Full House is kind of a bummer as this unconventional family situation is set up by a tragedy. This is not the first time we see DJ and co. mourn the loss of Pam (see: the rest of this list), but it gives us a preview of the heartbreak to come.

2. "The Miracle Of Thanksgiving"

Suffice to say the first Thanksgiving without the family matriarch is a little hard on the Tanner fam, and not just because of all the destroyed turkey. Jesse is still struggling with his sister's death, but flipping through an album of memories with Stephanie certainly kick-starts the healing process.

Stephanie's drama about misplacing Mr. Bear — a gift from her mother after Michelle's birth — is pretty sad in concept. Steph was old enough to remember her mother, but nowhere near old enough to create a slew of real memories. The bear is almost a dark consolation prize of sorts. The waterfall tears start when the gang watches a video of the day they brought Michelle home. This is maybe the first real time we get a peek at Pam and OMG, the actress does kind of look like DJ, which is eerie.

4. "The Greatest Birthday On Earth"

Um, JK, the birthday is a disaster. Michelle gets locked up in a gas station on her third birthday, and is notably distressed about that whole ordeal. I mean, being locked in a gas station is a great way to ruin a toddler's birthday, but also think of all the therapy. What's truly endearing, though, is Stephanie and Jesse's attempts to comfort Michelle... even when it involves a mop-haired clown act.

OK, "Honey, I Broke The House" is incredulous at worst and a lolz parade at best. This is, lest we forget, the episode where Steph drives a car through the kitchen. Somewhere in the middle of that spectrum, however, there are feels at Stephanie's fear that her father won't love her anymore. Aw, girl.

Stephanie has a disastrous time at her pseudo-girl scout's mother-daughter sleepover, and DJ empathizes with her. Again, Stephanie is quick to point out that DJ did have Pam during her Honeybee sleepover, which DJ counters with, "Well, listen, we have three dads now. That's pretty cool." DJ then escorts her back to the slumber party, which, TBH, probably should've been the plan from the get-go.

I imagine watching this now is sort of akin to watching Titanic now. Back then, it was tears galore watching the culmination of Jesse and Becky's relationship. Today... eh, it may be a little harder to take seriously now that we've endured like 3000 versions of "Forever."

Jesse is trying to move out of the Full House and live a normal life with Aunt Becky (fair). Michelle, Jesse's little munchkin, isn't really digesting this idea and gives Jesse her pink pig as a parting gift. And Jesse cries. Spoiler Alert: he ends up living in the house for several more years anyway.

This episode. This episode. The death of Papouli didn't just impact Jesse and Michelle, it ruined an entire generation of Full House fans for years to come. It is the tear-jerker moment of the series.

What's scary about this Very Special Episode is that it deals with dark waters that Full House rarely wades into, that is, the discovery that Stephanie's classmate is being beaten by his father. There's isn't really a tidy, wrapped-up-in-22-minutes resolution either... so maybe this one's less of a tear-jerker and more of a will-keep-you-in-a-crippling-depression-for-the-second-half-of-the-day-er.

OK, this isn't a tragedy, but when Comet returns back to them there is such a sense of joyous, weeping relief.

DJ's mom was killed because of drunk driver, Kimmy. This revelation (I mean, we knew it was a car accident at least, right?) makes DJ's concerns about her friend's drunken antics a bit poignant. I get misty-eyed, however, because it makes me imagine a version of Full House without Kimmy Gibbler (i.e. not my Full House).

The overarching story about Michelle's amnesia is a total bummer, especially when the gang has to tell her her mother is dead (always with the dead mom stuff). Pair that with the fact that this is the last Full House episode (well, until Netflix got involved) and you know you need a box of tissues at the ready.